Saturday, I had my Dental appointment postponed until Tuesday, which was a saving grace, as we needed every minute of the day to do the last minute arrangements!

Saturday evening and after Marcela and Maria Elena had supervised my haircut at the hairdressers... I returned to the apartment alone, whilst Marcela stayed with her Mother for the night. I had been looking forward to a good sleep with the bed all to myself, but should hhave known better, as one of the houses on the estate decided to have an allnight party, which doesn't comply with the rules, but hey! if you are local, no one says boo! I eventually got to sleep about 5am, and woke again at 7am. I hoovered out the car for Marcela, and at 7.45am she turned up with Mum to collect it, although I was not allowed to speak with her, so sent a text instead.

I passed away the morning poking around on the internet, cleaning the house, and doing a load of washing.

At midday, I started to get myself ready, and was collected by Sandra, Oscar and Sebastian at 1pm, having made sure that I had the rings, and my wallet! and we made our way to Celebraciones Villa Real, which is a venue used for many types of celebrations including weddings, you can see more of the place here: http://www.banquetesvillareal.com/index2.html 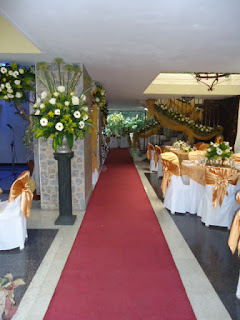 On arrival, I was introduced to the extended family and friends as they arrived, then it was time...

The only thing that was making me nervouse was, if I misheard the Notary and gave the wrong response, but I need not have worried, when Dr. Lizardo de Jesús Marín Quintero arrived, he immediately put me at ease. Marcela arrived, looking absolutely gorgeous (when I say arrived, she was upstairs, having  got ready at the premises). The Notary greeted everyone who had come, and made it a real family occasion, it did not seem formal at all, which made the whole process so easy, I can't thank him enough. 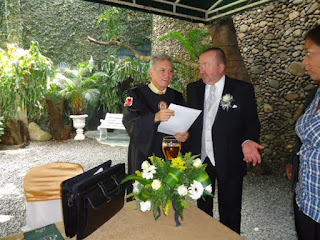 We then started with the photos, I think Marcela is lined up for another career, she was marshalling everyone to their place, and setting the scene, if the Photographer thought he was going to have a say, he was sadly mistaken, however, he seemed suitably impressed with her work, ha!ha! 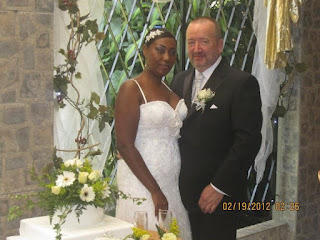 I was then asked to sit down, to watch a video, strange, but everything had gone alright so far, so I thought no more of it, although I thought I knew what was happening. Marcela asked everyone to gather round, and then up pops my Brother David, and his family on the screen, I nearly fell off the chair, and to be honest, did not take in all that was said, (I have watched it again today) I am not ashamed to admit that I could feel the tears building up... then started the second video, this time from my friends in Cadiar, both English and Spanish, that just about finished me off.

Marcela informed me that she started the arrangements for this, soon after I returned from Colombia in November, how she, and everyone involved kept this a secret, I will never know, and I did not suspect a thing.

After a lovely meal, there was the traditional giving of the Brides bouquet, but unlike the UK where it is tossed over the shoulder to all the single girls, here, every single girl takes off a shoe, they are all put under the brides dress, and the groom, pulls them out one by one, and the owner of last one left, gets the bouquet, that way the flowers are not damaged. 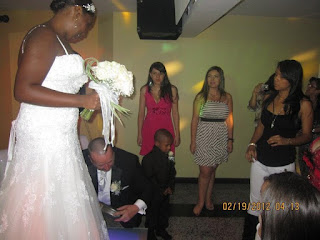 Then there was dancing, this was my time to sit and reflect, as anyone who knows me, will tell you, I don't or rather...can't dance!

6pm, it all wrapped up, and as I walked to the car, my tooth popped again... Oh well! at least it stayed for the photos.

From there Marcela and I went to a Hotel in Medellin for the night, it was lovely the whole suite, bathroom including the jacuzzi were carpeted in fresh rose petals, I would not have wanted to be the cleaners today! Marcela was suitably impressed (so was I) with the 2.0m bed, I finally had a bed, I could sleep in, and not cling to the edge ha!ha!

After breakfast in our suite, we headed off, and going to Maria Elena's to collect some presents, and our portion of the cake, which unfortunately Customs do not allow us to ship abroad... sorry! Then we have spent the day looking at photos taken by family, the videos and generally chatting.

It was a wonderful occasion, and I for one, am very happy.

Jaime and his Team have been working flat out this week, in all weathers, from cold and wet, to baking hot. They have finished the fencing d...