We are running around like headless chickens again... we arrived back on Monday, to be told that due to a huge backlog, my cedula (Residency card) may not now be issued until the end of the month, which is a pain, because it is stopping me doing so many things. I also received confirmation that my boxes have arrived in Colombia, but they want reams more paperwork before they will tell me how much duty Customs want to charge, and release the boxes for delivery, so we have been trying to sort this out.

The Honeymoon on San Andrés Isla, was wonderful, because of the person I was with, more than the island itself. San Andrés I would imagine, is the poor relation to the well known islands, and this can be seen in the state of the buildings and infrastructure, which needs a lot of money spending on it, however this is reflected in the prices.

The Hotel, was old and almost Colonial in character, but it was clean, and comfortable. The Staff were friendly and helpful, and it was right on the beach, so much so, that one afternoon there was a storm, and the sea was lapping up to within two metres of the Restaurant. Because the Hotel was at the crown of a bay, all the seaweed, made its way onto the beach, and there were men cleaning it all day. We used to walk up the beach to a 'causeway' which lead across to Rocky Cay, a very small island, with a shipwreck clearly visible just off shore, for some reason, probably because hundreds of people were walking this every day, it kept clear of seaweed, and although in many places it was little more than waist deep, you could find spots a little deeper, for a swim.


The Suite was lovely, you entered into a lounge, (which we did not use) and went downstairs to the bedroom, and bathroom, we didn't use the balcony, except to dry clothes, as it was too hot, thank goodness for air conditioning, and it is not often I say that. 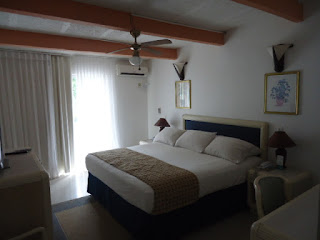 There were essentially two Restaurants, both served the same food, it was just that one was laid out more like a Cafeteria, and was used for breakfast and by those using the beach during the day, and the second was more upmarket, directly above the other, and used by us every night, as the outside area had a breeze, which was very welcome. 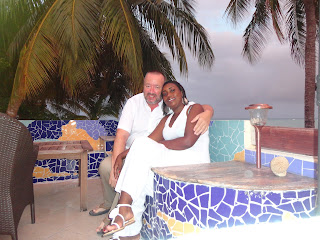 The food was excellent, there was not a lot of choice, being a relatively small Hotel, but the quality was good and there were only a couple of meals I was not so keen on, but that was personal preference, they were all local dishes, and I tried food I had never had before, which is unusual for me! If there was something you definitely would not eat, the Kitchen would find an alternative, but in our case, that did not happen.

The first week, we hired a Golf Buggy for the day, and explored the island perimeter, after we had stopped for lunch, Marcela decided she wanted to drive, lovely a chauffeur!... 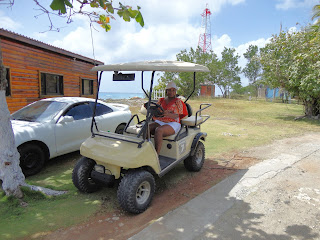 That lasted all of five seconds, because it was fully automatic, it grabbed as you pulled away, so I was immediately back in the driving seat!

The second week, we hired a scooter for two days, much against my better judgement, because I have always said I would never use two wheels without protection, but it went well, and we saw more of the interior of the island. I was surprised that there were at least four Military bases, and maybe more we didn't see, but it is certainly well defended, and like here, Colombia had loads of Police visible on the island, and the other islands offshore. 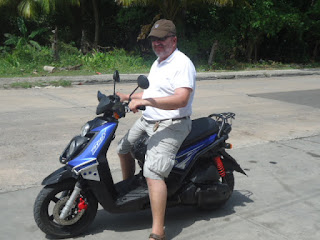 Phil on the Speedster!


We didn't bother with taxis, there were no bus stops, you just stuck out your hand and they stopped, and when you wanted to get off, you told the driver, and he pulled over, and the cost, 1500 pesos (or 54p UK) whatever the distance, good value, even if most of the buses were falling to bits.

There was only one thing that let the Hotel down, and that was the daily breakfast visit by 'Captain Mauriceo' who came flogging his trips and excursions, once you had signed up, you found out that you still had to make your way to Town to go on the trip, where you could negotiate it cheaper, and he didn't mention the added extras, that appeared as you went along. In fact you never saw him outside the Hotel, I think he was just a salesman, he certainly didn't appear on our boat trip to the natural acuario / aquarium and Heines Cay (another island) which again you walked to, so I had bought a waterproof bag for the camera, which was just as well as it rained! 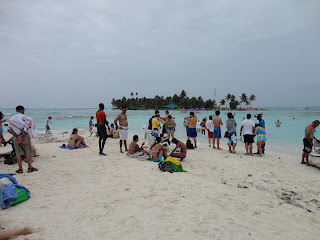 Acuario with Heines Cay in distance.

From there we were taken further round the coast to Johnny Cay, which you were charged again to land, to use the loo, sunbeds, and anything else you could think of!, you could walk around the island in under ten minutes, but you were stuck there for nearly four hours, not helped by the fact it rained. However if you got bored, there were plenty of Police to talk to, including two drugs dogs, this surprised Marcela, because when she visited last year with her Mother, there were very few in sight anywhere, but having spoken to locals later, we found that there had been a big increase in drug related problems, and the influx of Police was to stamp it out before it became a major problem. 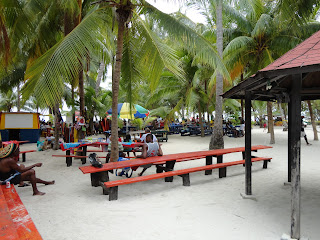 The last three days we spent on the beach, before flying home on Monday, it was a lovely holiday, thanks to my Wife, now it is time to start saving up again, and hopefully before too long we will be able to make our way to the UK, and introduce Marcela to her new family! 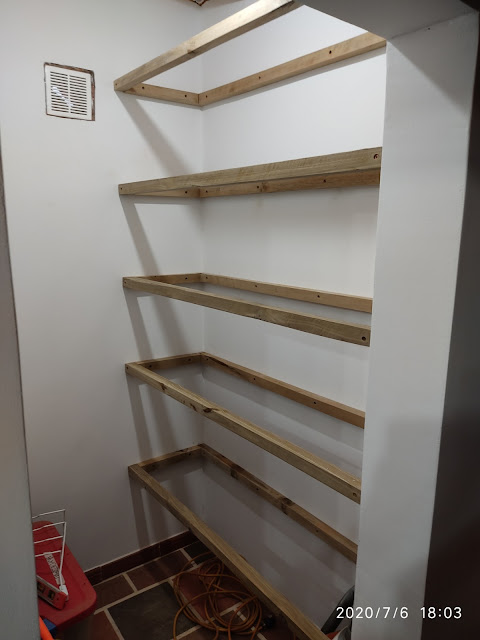