What a day... we were out of here at 8am, and other than dropping in for lunch, we have not managed to get back until 7pm this evening.

The idea was to get into Medellin for 8.15am, as I had to visit the Colombian version of Customs and Excise, to get a reference number to be sent to the Import Agent for my boxes, however we were delayed.

As we got to the estate exit gate we were eventually approached by the Gate Porter, who informed us that the Administrator had revoked all services, including use of the swimming pool, as the monthly charge had not been paid! I thought, I could blow my stack, but watch out if you upset Marcela, we paid the charge to the Owner along with the rent, six months in advance, so if it had not been paid it was down to him. Marcela's phone was not just red hot, it was melting! ha!ha! and Bless her... the situation was resolved, the money had been paid, it was just that the Administrator is totally inept, and had not done her job properly.

We eventually made it to DIAN (Customs) about 8.40am, to find a queue half way around the outside of the building, and it took three and a half hours to get inside and be seen, and it took a maximum of five minutes! So we went round the corner to pay the car tax, only to find another horrendous queue, so we gave that a miss.

From Medellin, it was back home for lunch, and then off to the Dentist, this has been an ongoing saga for so long, even I am bored and upset by it, suffice it to say, I eventually lost the problem tooth at the end of my first week in San Andrés, it is now somewhere at the bottom of the Caribbean. 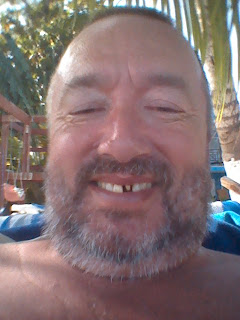 I was at the Dentist for two hours yesterday, while another Specialist worked on the tooth that I had the root canal work on in November, other than the Cadiar Dentist not having looked at his x-ray, it was not his fault, but she drilled out the whole interior of the tooth, and eventually showed me a 1cm length of wire, which was the end of a Dental probe, which she estimated had been there between 10-15 years, so was the work of my English Dentist, this had caused all my problems, as the tooth had grown around it, and it had infected the gum.

Now the tooth has been temporarily filled until next week. Today I was back, and had the two permanent Crowns fitted, they look and feel great, I just hope they last.

From the Dentist, we made our way to the Shopping Centre, where we joined yet another queue to pay the annual car tax, which was about the same rate as in Cadiar, much cheaper than the UK, but here everyone seems to want to pay it, possibly because if paid before mid March you get a 10% discount!

From there we went into the Centre, to do some food shopping, and then to Home Centre, where I bought my first piece of workshop machinery, a Band Saw, not that it will be used for a while, but if I start now, then I will have a few bits to get me going, and maybe do some woodwork in the room we use for storage, whilst Marcela is working, the next piece will be a scrollsaw, when I know how finances stand.

That's it for today, time for feet up, as Marcela has to be out early in the morning!