We went to Santa Fe De Antioquia yesterday, and it was as described, the humidity was horrendous, and I know that I am the odd one out, but I didn't rate the place much, it looked as it it could do with a lick of paint. although what I saw of the surrounding countryside and mountains on the approach were lovely.

The area is covered in holiday fincas and parks, and I think for this reason, there were a lot of Tuk-Tuk type taxis, good fun! but I still haven't worked out how they have the cheek to come up with a Sports version!!! 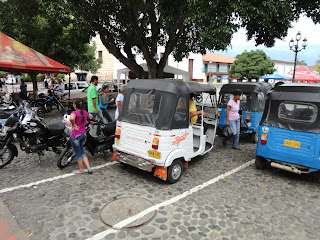 We were stopped on the way, by the Police doing routine checks, the Officer was politeness itself, and wanted to look in the back of the car, so as conversation was obviously the order of the day, Marcela decided she would get out with him, but when she was some time, I went to see what was up, and there was a minor problem, although the car, has seats for five, for some reason the registration card states four, however as the fifth person was my mate Sebastian, he overlooked it.

Back home, I went for a siesta, and zonked, every time I came to, I went flat-out again, I haven't a clue why. However at 10pm we decided to watch a film, so watched, 'I am number four', not usually my type of film, but I have to say I enjoyed it.

By the time we had finished reading it was 2am before lights out! But that did not mean sleep. I kept waking, to find another Mosi bite, I wish I could have got my hands on it. Then at 5am there was someone nearby starting their DIY, I could hear the hammer knocking...at 5.45am I had to fly to the bathroom, and had a repeat of last week-ends problems, whether it was the heat, or something I ate, I have no idea, but as a result, I have taken it easy today.