Funny how Mother's Day  seems to vary from Country to Country, but Father's Day is held on the same date!

Anyway, we had a rough night, it is another fiesta week-end, and the Neighbours had music going until 3.15am, after breakfast which was rather late this morning, Marcela prepared for the family to arrive, as we have to biggest property, it makes more sense to gather here, today, to celebrate Father's Day for Oscar (Sebastian's Dad!), fortunately the meal was to be a Chinese delivered. Firstly Maria Elena arrived with Sebastian and a friend, and they went with Marcela to the swimming pool, whilst I did some tidying, and took some photos of the new wind damage to the roof. 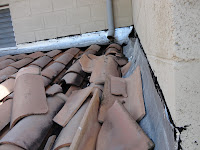 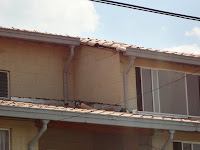 Apparently the Owner is not paying the Agent for work done, so up until this afternoon, I said they could just suffer the damage, but we had a heavy thunder storm, and rain came in, so it looks as if I will have to fork out, if I do not want our property damaged, and  end up suffering from damp inside.

Later we were joined by Oscar and Sandra, and had a nice afternoon, and ended up playing with our new Dominos, which, now having 91 tiles instead of 28 caused a few frustrating moments. Everyone eventually left about 8.15pm, and I am ready to have a shower and crash out. Just another day as far as I am concerned, because I heard nothing from my 'step-daughter' in the U.K. so I have now accepted that I have been cast adrift.