Unfortunately we have made the decision, that Charlie is not suitable for, apartment living, he needs outside space, because he has too many issues that need resolving.


He goes crackers even when he hears another dog barking, which is not going to go down well with the neighbours. He does not like being left alone, which again will cause us many problems, especially as we have not even got a balcony, which he can use as outside space. He will not sleep on his own at night, however hard I tried last night, he was having none of it, and in the end I had to give in, because trying to shut the door was a waste of time, he would have ended up coming through it. As a result Marcela was worried, and kept waking me to make sure Charlie was behaving... I think he was the only one that had a good nights sleep!


Walking him is no problem, I need the exercise, and he is good, until he sees another dog, then it is a fight to control him. However this afternoon, I took him for his third walk of the day, and we saw a young dog on a lead on the other side of the road, he went loco as usual, but then the woman walked her dog straight over to us, I was ready to do battle, but suddenly Charlie relaxed, and the two of them had a good sniff at each other before we parted company. A few minutes later we met another small dog, this time unattended, and he was fine, so there is hope... However again a short time later we met an enormous Pitbull, on a lead, it even made my hackles stand up, and Charlie went loco again.


If we had the Finca with outside space, I think this might have worked, but not here, as you can see from the photo, he is 'slightly' bigger than your average Terrier, I had tried unsuccessfully to guage his size from the floor tiles in the original photos, must have been big tiles!. 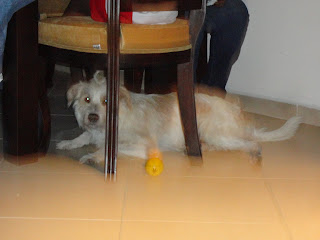 This was my mistake, now we have got arrange for his return, I know that he has not been with us for two days, but I can see where this is leading, and I do not want matters to escalate. It is a shame, and I take the blame, I should have waited.
By Phil Sale at June 10, 2012