Trip to Santa Elena prior to Festival of Flowers


Prior to the main Parade of flowers which takes place tomorrow, they advertise a week-end where you can travel up to Santa Elena, either for half a day on a coach, or a full day on a Chiva (ornamental rustic Bus), and see the preparations for the main Parade. For me this sounded far more interesting, so we had tried to book for the half day, only to be told that due to lack of interest the only option was for the full day, which at 70,000 COP ($40) a ticket, for Colombia is not cheap, however we decided to go for it, none of us had done the trip before.

Yesterday morning I set off with Marcela and Maria Elena, and we arrived in Medellin, in plenty of time to catch our Chiva at 9am, whilst being herded onto the chivas, we were all given a sombrero and poncho, whether it fit on not, did not seem to matter!

The Chiva is definitely not a comfortable vehicle to travel on, the seats have next to no padding, there are no windows or doors for the Passengers, which on a fine day is lovely, but as you will see... Also what surprised me is that there is a sort of reverence towards these vehicles, whether it is because the population knows that it is an important income from Tourists and locals alike, or the decoration of the vehicles, I have no idea, but people stop as you go past, smile and wave, both in the city and outside, other vehicles beep their horns, and the Chiva drivers answer with their air-horns, it is a great experience. 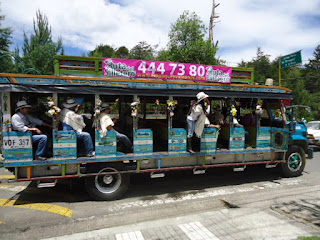 The drive up to Santa Elena was pleasant in the sun, however we were then dumped in the 'village' centre for an hour, why?... to get people to spend money locally, there was no other logical reason. We were then herded back onto the Chivas, for the ride to the Finca five minutes away. 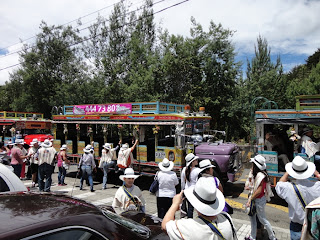 On our arrival at the Finca, it immediately became obvious that the day was not what we were expecting. rather than being shown their flower production, and preparations for the Flower Festival, we were put in the garden of the owner, where tents had been erected, for the expected change in weather!!

There were two examples of what would be carried during the festival: 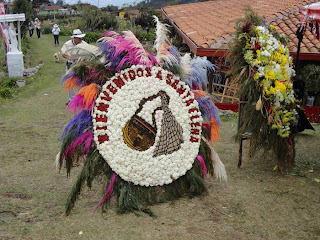 We were welcomed by the 78year old owner and his son, then given a short talk on the preparations, before the son gave a demonstration on making a small display, which people were then allowed to carry. Certainly not a job for the infirm or unfit, you need a strong back and neck muscles to be a Sillitero, because the wooden frame rests on your back, with no padding, and there is a loop of material that sits around your forehead, the rest is down to strength and balance, and to think they used to carry their flowers down the mountains in this fashion!! 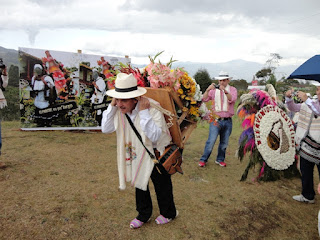 After this we were given a lunch of typical Colombian Banda Paisa (frijoles, rice, salad, chicharone, churizo and platano). Then the weather changed, and it chucked it down, fortunately we had gone prepared, but many hadn't, and they were Colombians! We were then left to our own devices for a few hours, by which time, I had changed my mind about the whole venture!! In between the showers we were able to look around the garden: 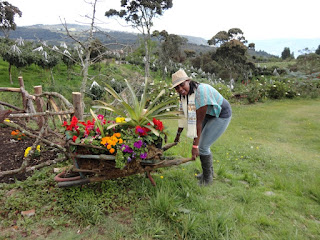 Back to the chiva, and off to another Finca, we thought to see more of the flower arrangements, however not a bit of it... we were taken to La Palma, a village even higher and colder, where we were... there is no other description for it... dumped! there was a stage where occasionally a Colombian group played some music, the rest were stalls selling tourist bits and pieces, and food and drink stalls, again just a money spinner, nothing else, however the Girls did buy gloves!!. We were then given more food of a typical arepa with cheese, platano and churizo with hot chocolate (not as you would know it!). Due to the Logistics, this last event was far from well organised, and resulted in us not being able to leave until 7pm, by which time we were frozen.

Now I know why the Chiva is only great during warm weather, the trip down the mountain was freezing, and it was not until we reached Medellin again, and the warm, that I started to get any feeling in my fingers.

Well, I think you can guess my feelings on this event... If we had just gone for the morning trip, I would have probably recommended it, however this was a way of ripping people off, there was nothing to do, unless you wanted to dance in the pouring rain, and yes, a few did! and not much in the way of flowers, I was certainly disappointed, I now wish I had decided to go to the Parade itself, but I will do that next year.
By Phil Sale at August 06, 2012