Thursday we went into Town, and I bought a small Christmas Cake, not iced, so back home, I prepared the Royal Icing, and iced the cake, there was some left over, so having added colourant, decided to try my hand at decorating, using a plastic sandwich bag and cutting the corner off. As I started Marcela's eye lit up, and she asked if she could have a go... What could I say!! 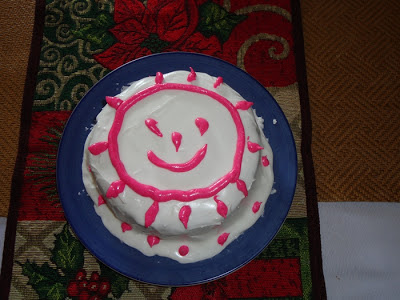 Having sought advice from the Christmas Cake Expert (Thanks Jo! xx) I think I will have to cut back on the amount of egg white, as although it set, it did not go hard. However having eaten over half of it... :) it is still very tasty. I have bought another one to trial, couldn't wait for next year!

Will this week-end ever end?!!!  On Friday evening the whole family, minus Oscar (Sebastian's Dad) walked up into Bello to see the Christmas lights, they had certainly gone to town on them:


Also celebrated on Friday was ' Dia de las Velitas' (Day of the Candles) in preparation for the Feast of the Immaculate Conception on the Saturday, apparently this is something peculiar to Colombia, an excuse for another Fiesta, and the official start of the Christmas Celebrations. If you are out and about, you end up having to walk on the road, because outside every house, a line of candles are placed and lit on the footpath, across the entrance to the property, to celebrate the Virgin Mary.

On arriving home, we found the neighbours were obviously going to celebrate this big style, the canopy was up in case of rain, the BBQ was going, and the Industrial size speakers were outside ready to get going...It did not take long, and the walls of the apartment were shaking. At three in the morning we gave up and went on the inflatable mattresses in the back room, with the door shut, but that was not a lot better, as it was then too hot.

I ended up getting up again at 6.30am, the music eventually stopped at 7am. Marcela eventually woke properly just after 9am, and about 10am I was going out, Marcela was not feeling well, so she was going back to bed, when the Party Goers re-emerged, and the music fired up again!

When I got back, I took Marcela out for lunch, and we pottered about at the shopping mall, anything was better than being at home.

Last night they set up again, I and thought we were in for a second night with no sleep, but they must have had hang-overs, because the music was at an acceptable level, and it went off before midnight!

I am told that Christmas Eve, and New Years Eve are even worse than Friday, so if things do not get sorted out in Cadiar before the end of January, someone will be hanging from a high tree, and it won't be me.

I have learned this week, that our Christmas celebrations are entirely different here, in that there is no Christmas dinner mid-day on Christmas Day, it is at midnight Christmas Eve / Day, I hope the family enjoy it, I will never stay awake to eat it, there again with all the music, I might!!

Today we have been too knackered to do anything, so we have not been out, I have cleaned the house and Marcela has been busy cooking, and sorting out her closet.
By Phil Sale at December 09, 2012