On Saturday we had our second English Class, and the 'Students' are all doing well, and taking it more seriously than I thought, so I have some more lesson planning to do before this Saturday.

Sunday, we had a family day out, to Parque Creativa, in Rionegro, it is a cross between a Country Park and a Theme Park, for those of you who knew it, it is like Alton Towers was when it started out! (Without the house).


This was one ride I was glad that I could not go on, and I had a genuine reason, due to the problems with my back, I was not allowed on!

Other than Marcela, who I have come to the conclusion is a total 'Nutcase', albeit a lovely one, the others did not look that keen on this. But we waved Marcela, Maria Elena and Sandra Good-bye (I offered to look after Sebastian, but Oscar was looking for a reason to get out of this as well!

It was a good job they were all wearing trousers or leggings, otherwise we might have got a shower!! ha!ha!

I think this last picture says it all! :)

There was also a simple Cable car system, which took you around the Lake:

It was just a shame, they didn't have something more secure, so that Children could go on it, instead of a ski-lift affair, Kids would have loved this.

Then there was the train, which Sebastian loved, pity it was pink! 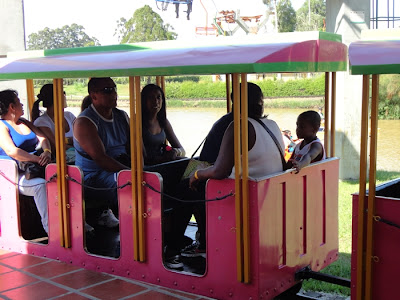 Why didn't I go?... Well, someone had to be the official photographer ha!ha!

Then finally, we walked through the woods, where they had reconstructed an old Village, there were Actors in costume wandering about everywhere, interacting with the Visitors. Other than being very hot, and the lack of consideration for an 'old man'! it was worth seeing:

All in all, it was a great day out, even if we were totally knackered on our return!

The summer has returned to Antioquia, after ten days of cloud, it is hotter than ever, and very humid, registering 98% on many days. Apparently we have got this until the end of February.

Yesterday, Marcela was out at a meeting all afternoon, so having cleaned the apartment in the morning, I just pottered.  Then in the evening I sent an email to the Gestor in Spain, to see if we could bribe the Court Official to speed things up with the new escritura, but I had a reply this morning stating that it would not be a good idea even to suggest it... I now wonder why I ever sent the email, bribery is something, I have never condoned, and in a way I am glad it has gone nowhere, still if it had worked!

The end of this week, we go to see if my refund on my spectacles is ready for collection, I hope so! then next week back to the Docs for my BP check-up, after my daily exercise on the elliptical machine, I hope the Doc appreciates all the work I am doing, I have had to go out this morning and buy new jeans!
Posted by Phil Sale at 14:40