Trip to Bogota for my Visa!


Well yesterday was interesting! we were up at 2am, caught the 5.30am flight from Rionegro (Medellin) and arrived in Bogota at 6.45am. I had not visited Bogota before, only stopping at the Airport in transit, so yesterday was an eye-opener for me. Having been used to the balmy climate of Medellin, to approach Bogota in Fog, and where we could see, a hard frost, made me shiver before we had even landed! Fortunately we had gone dressed for the occasion, I still reckon it was colder than the UK in winter, and it was summer here!


We picked up a Taxi, as we had to head to the Northern end of the City, the Driver was an amiable soul, and liked to give a running commentary, which was nice, although he spoke so fast, I didn't understand a lot. The approach to the Airport is all new, with Industrial Estates and Shops, a modern and welcoming advertisement for both Bogota and Colombia.

For a Country Bumpkin like myself, I thought Medellin was big, but in comparison Bogota is vaste, there is no way I would want to drive there.


We arrived at the Ministerio De Relaciones Exteriores at 7am, and were in the first dozen waiting outside.
The Doors opened dead on 7.30am, by which time there was a queue behind us, but not all for Visas! I then had to pay $50 US for the papers to be vetted, they have a Bank in the Office.

We were No.6, Marcela and I went in together, and the young man, obviously wanted to assert his authority, no smile, curt but polite, however that changed later! We explained that I wanted to renew my Visa, but change it from a Pensioners Visa to a Spousal Visa, he then updated us on the latest info!

The Officer then informed us that he had the right to give me a visa for any length of time he wished from 3 months up to 3 years, but stated it would not be for the latter ( No... because they want more money in the coffers!).

Marcela was then asked to leave the room, and I had a 10 minute interview, how did we meet? what were my circumstances? what were our plans? etc. I was asked if I wanted the interview in English, but I stuck to Spanish, and he spoke slowly for me, so there were no problems, and his attitude changed completely, he was very affable!

I was then sent out, and Marcela was interviewed, fortunately our stories matched without any rehearsals! I was then informed I had been granted a Visa for two years, I was given the option of nipping back out to the Bank in Reception to pay the $160 US for my Visa, at the Bank in cash, or now they have a card machine on their desk, as I had taken the cash I did the former, whilst he chatted with Marcela.

On returning to the Booth, I was informed that Marcela was 'responsible' for my actions in Colombia...wrong move! She won't let me forget it, however I have warned her, that if she tries to get Bossy, I will get my own back in three years time, if we don't have a family in the mean time!

Visa Mission Complete within an hour!

We then went to another Government Building (about two Blocks away) as I had read, I could renew my Contraseña / Cedula, there and then, that might have been the case in the past, and again in the future, but not at the moment, because they said they are still having problems getting the Cedula Cards for Extranjeros, and it will be February before they are issued.

I was told that I could apply for a Contraseña (Temp Cedula) there, it would take 8 days, and I would have to collect it from Bogota, so that ruled that out, we will go to their Office in Medellin tomorrow.


After we had concluded our business, we left the building, when in the direct sun it was baking hot, but as soon as you stepped out of it into a little bit of shade, it was freezing, with a biting wind, it must be difficult to decide what to wear if living there.

Marcela in her wisdom and at the time unbeknown to me, had decided that Bogota City Centre was too dangerous even for her, (again Media hype on the internet) and when we got into a Taxi, she immediately asked him to take us to El Parque on Calle 93, why there other than the internet, I have no idea, there is a small but lovely Park, a few Cafes and Restaurants dotted about, but otherwise it was like wandering around Envigado or El Poblado...boring, next time it is the City Centre! 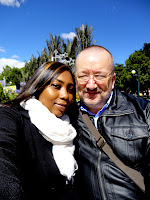 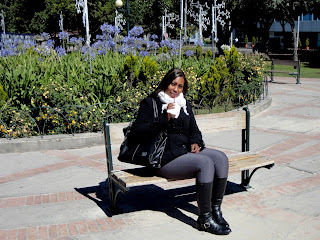 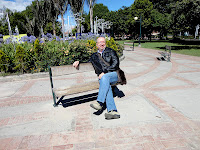 We had pàssed a Restaurant called 'London Calling, and walked back  to it for lunch, but it was closed, so Marcela had to make do with a Photo! 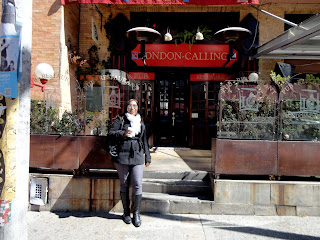 After lunch, we decided we would head back to the Airport, I had had enough of wandering around looking at Embassies and high priced houses.

We were lucky enough (sarcasm!) to stop a young Taxi driver, 'Danny' who hadn't a clue, and his Sat Nav kept closing down on him! He took us on a tour, of parts of Bogota I don't think they want the Tourists to see, we went via Chile (No we were not quite that lost, it is a zone of the city) and I have never seen potholes that big or deep in a road, unless there had been a disaster, the areas were run down, and it was a total contrast to what we had seen on our arrival. However Marcela says that even this was good compared with the south of the City.

He eventually returned us to the Airport, but despite repeated requests he took us to the International Terminal, saying it was the only drop off point, which we knew to be untrue, as we had seen the area on arrival, however we were too tired to argue, and asked in the Terminal, where the nice Policeman told us that we should walk the length of the Terminal, down the stairs, through a scary tunnel, which fortunately had numerous Police along it's length, and up into the Domestic Departures.

Bogota is definately not the place to go, if you are looking for a warm climate, it is certainly spending a lot of money, on improving the parts the Tourists and Wealthy frequent, but it needs to spend a lot more on the areas it local Residents live in.