Addition to the Family! 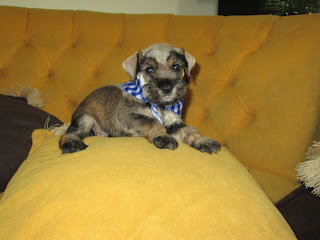 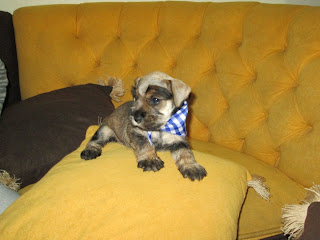 Pépe is six weeks old on Sunday, and he is joining us this Sunday, he is a standard Schnauzer. We went to meet him and his family (brother and sister) yesterday, and decided he was the one for us, whether he will agree remains to be seen.

Anyway after making the decision, we had to go on a buying spree to ensure we have everything ready for his arrival, hence the delay in him joining us.

There is only one problem that I can foresee  and that is Marcela!  There is a fad over here, dressing up your dog in human clothes, fortunately mostly fashion  wear for bitches, but there is a male wardrobe as well, including shoes, there are also false nails, marketed as  furniture protectors, but in glaring colours, it is going to be a hard job to persuade Marcela not to go down this route, so far I have given in to the bandana, but I won't be happy if everything else follows. I am hoping the threat of her having to clean up after Pépe and take him out for his early morning walk, will be enough to dissuade her!!

Anyway once he has joined us, we will add some more photos!