The Good and The Bad, or in this case the other way around!

Yesterday lunchtime, Marcela had a phone call from her Sister, who was at work, she had been out at lunchtime to the local Centro Comercial (Mall) to use the ATM, and been the victim of an armed robbery, whilst there she was approached by a man and woman, and the man threatened her with a pistol, demanded that she withdraw the maximum on her Card, and the woman took her purse.

After withdrawing the money, her Sister saw Security walking passed, and shouted for help, the woman looked round, at which her Sister grabbed her purse back, and the woman ran with the money,followed by Security, and the man in the other direction.

It turned out that she was the second person from her Office that day to be robbed, and now they know that that particular Mall is a regular crime hot spot. Security took her details, but in Colombia if you want to report it to the Police you have to go to an Office and queue for 4 - 6 hours, and then nothing happens, so she didn't bother, it is a sad indictment of the system.

Fortunately Marcel's sister was not injured, but the money taken was a considerable sum, bearing in mind the wages over here. As a result I have ordered Pepper Sprays for Marcela, her Sister and her Mother, I think especially for Marcela's Mum because she was talking about buying a flick knife, I told her that her tongue was sharp enough, and that seemed to do the trick!

Today, was another day, and has been great, it is Marcela's Birthday, so we went out for lunch to a new Restaurant for us, and it was perfection, I have done a write up with a couple of photos on the Restaurant Review page if you are interested 'La Bolsa'. It was the perfect atmosphere, the Staff were great and the food excellent, you can't ask for more than that.

From there we went back to our favourite Ice-Cream Parlour in Bello, however full we were, we just had to call, because on your Birthday it is 2 for 1, and they wouldn't have forgiven us had we not visited! 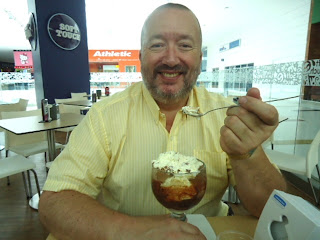 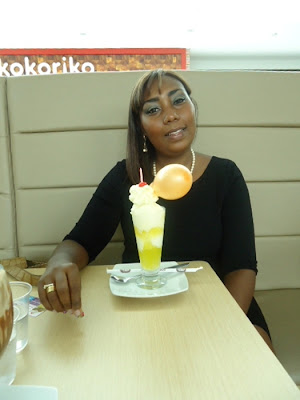 I have just about had it with diets, and I am ready to tell the Doctor what I think of his ideas, today made it all the more likely I might just do that, I really enjoyed myself. However I think that had more to do with the beautiful woman keeping me company, as the food!