Not much to report, we went to the F-Air 2013 Air show yesterday, Marcela, her Mum, Sister, Sebastian and myself, we had gone prepared, because Rionegro is reknowned for being a bit chilly to say the least! however I found it quite warm, and my body warmer was used by other members of the family.

The were an excellent display of planes and helicopters, both Military and Civilian, although we tended to stick with the Military. 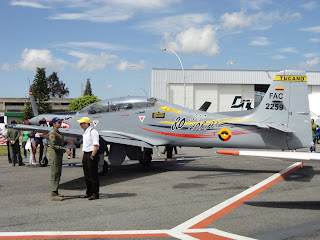 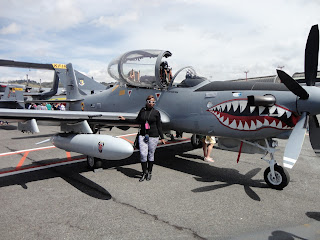 Left, is one of the Tucanos used to give support to ground Troops, used a lot over the jungles of Colombia.

We then went to watch the Air Show, but this was a bit of a disappointment, I think because they were using the International Airport, and they couldn't keep it closed for too long, so we only had a 35 minute display, two lots of Parachutists, one Fighter Jet doing a display, and four Ground support planes. Here is an even shorter Video, to show what was on offer!


After watching the 'Display', Sebastian then met up with the Military Dog Handler and his dog, who had parachuted in!

After this we went off for something to eat, before heading home, to Pépe, who had been great while we were out!

Last night the music started about 8pm, and went on until after 4am, and it was wall banging! I went out at 6am with Pépe, and Security said they had phoned the house every half hour, but the occupants had ignored him.

This afternoon, neighbours on our side of the estate decided to get their own back, and brought out a speaker the size of a fridge, and had it going at max volume, it was obviously in retaliation, because the music was distorted, again wall banging, and no respect for other neighbours, who might have been trying to catch up on missed sleep.