I decided that Pépe deserved a Post to himself, so here goes!

I have had a number of dogs over the years, and all have been different, but Pépe is probably the most demanding of all, he is growing at a rate of knots, and now weighs 8.4Kg, he is always active, and has become a good guard, probably the best I have had, any unusual noises and he barks, and thank goodness he has a proper bark, not one of those squeaks some have. He has taken to the platform I erected for him, he jumps on the sofa, and then onto the platform, and watches what is going on outside, when he feels like it he joins in, and barks at other dogs, who are chatting around the estate!

Pépe still gets over excited when I try to put his lead on to go out, he loves going, but wants to be free, and does his best to stop me clipping the lead on, then once on, he proceeds to chew the lead... maybe one day he will calm down.

I have to laugh at him, he now cocks his leg all the time, but he has not quite got the hang of this, and often cocks the wrong leg, so instead of spraying the tree he is standing by, he sprays away from it, then loses his balance and props himself against the tree! :)  I just wish that when he is in the house, he wouldn't cock his leg when using his tray, as a result he tends to miss!

How Pépe manages to continue biting us, I have no idea, about six or seven of his baby teeth have snapped off, including those directly at the front, top and bottom, which makes feeding time a bit interesting. He now has a nickname, 'Gummy', and he answers to it, which is a bit worrying, hopefully over the next couple of weeks, his adult teeth will start to appear.

This evening, we had our first real encounter with the wildlife, and I came away with my first injury... We were walking along the verge, when I say verge, it is probably about 20m wide, and came across two of his friends, the horses we had met previously, when they had rubbed noses, but tonight, the horses spooked, we discreetly withdrew, but then I heard a noise and turned, the horses were cantering towards us, I don't think we were the target, but we were certainly in the way.

Pépe being Pépe, decided to stand his ground, so I had to haul him sharply out of their path, intending to seek sanctuary behind a nearby tree, unfortunately there was a low hanging branch, and now I don't have enough hair to protect my head, it caused an injury, when I put my hand up, it came away covered in blood, but as with all head injuries, a tiny scratch, produces a lot of blood!

The horses continued passed us, scattering people in all directions, but on our return home, I didn't see any one having suffered an encounter with them, so all was well.

Pépe's other interest when we are out, are the black Vultures, horrible birds, much like seagulls in the UK, they gather where there is carrion and rubbish, and unfortunately people here, dump their rubbish anywhere. 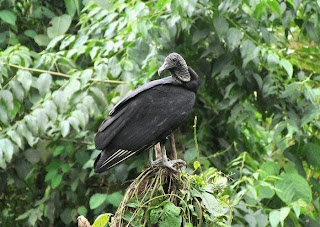 They are prolific along the river bank, mainly because this is where rubbish gets dumped, along with the raw sewerage in the river, something else that needs to be resolved. Pépe spends his time putting the Vultures to flight, he would love to chase them, but his lead soon puts a stop to that.

On the whole, Pépe is a very healthy dog, he loves fruit and raw vegetables, and as yet, there has been nothing he won't eat, banana, papaya, pineapple, carrot, onion, mushroom, you name it, he'll eat it, but he does line up for a the corner, cut off my daily morning toast!

Email ThisBlogThis!Share to TwitterShare to FacebookShare to Pinterest
Labels: Pépe