What a god awful day!  It started off all right, I was up at 5am to take Pépe out for his walk, and from there it went downhill.

I was in the Office, when I heard Pépe retching, he had brought up his breakfast, I just cleaned up, I wasn't overly worried, this happens sometimes when he pigs, and swallows his food instead of chewing it.

Marcela rang the Garage and demanded to speak with the Boss, regarding the length of time they were taking with our car, and he made the mistake of not getting his facts right before criticising, he thought we had been the owners of the car for some time, and failed to maintain it, unfortunately he said so, however when he realised that we had only had it a week, he told Marcela that there were numerous small faults, all down to lack of regular maintenance, and he would try to get the car on the road later today... he failed!

We then prepared to go out for what we envisaged would be a long morning, Maria Elena said she would have Pépe while we were out, so I took him, his toilet, and his bits and pieces and walked round with him. On my return the phone was ringing, Pépe had gone off his back legs, they were going in every direction, by the time I was back round, so suspecting poison, although his gums hadn't changed colour, I asked Maria Elena to ring Marcela and get her to find an Emergency Vet, as ours only works shop hours. I carried Pépe home, and we collected his papers, jumped in a Taxi and headed for the Vets.

On arrival, there was a queue, and Pépe showed no interest in other dogs or cats in the waiting area, this was not him at all.

When it came to his turn, we went in to the Emergency room, and it was like I had a new dog, Pépe was back to his old self, The Vet checked everything, and could find nothing wrong, and to be honest I felt a total fraud, so £6 lighter, we jumped in a taxi and back home. Once there, we decided he was fine, and back to Maria Elena's he went, where he has spent the day being spoiled rotten.

We then started off again, firstly I had to pay the balance on my trailer, because of the emergency with Pépe, we did not have the time to go over and inspect it, but I have been sent photos, we have agreed that any problem we will iron them out once we have the car back.

We then went to the house, as I needed to confirm some points with John, on arrival, a neighbour had parked across our drive, so I parked on the road outside a neighbour, and in we went. John was looking harassed, there had been a problem with the delivery, and there were eight boxes of tiles short, but it had been John's fault' it was listed as two on the order, and I had only paid for two, so he phoned the store, and as they were going to collect some over purchase, they agreed not to charge transport, and deliver first thing in the morning, if I called in the pay.

We were then taken into to see the work done, the shower room tiling is nearly completed, up and down, the wooden ceilings upstairs have been coated in preservative, the Kitchen ceiling has been plaster-boarded, cables for electric lights installed, and they were preparing to plasterboard the old kitchenette. The Kitchen had been tiled, and the Pantry built, but there was the problem, they had put the door in the wrong place, and they had my plan, John said it would be fine the door would open inwards, and not cause a problem in the kitchen, wrong!... if it opened inwards it would take up valuable space. His workman Carmelo who was listening to all this, and was doing the building, said not to worry, he would change it, problem solved. They have also come up with another good idea, and that was to raise the floor in the pantry, so if we wash the kitchen floor, no water will find it's way into the pantry and spoil food stored in there.

Please excuse the photo quality, they were taken on my mobile! 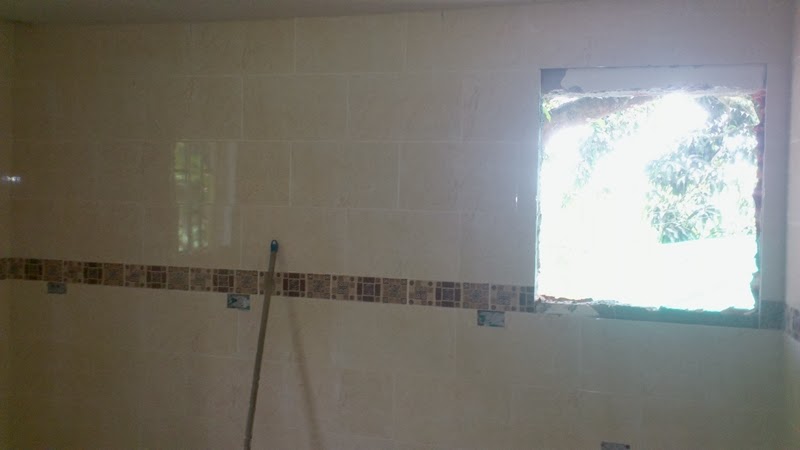 People have asked me what an earth I want with a Pantry/Larder, well, it is something I always wanted, but the houses either didn't have one or didn't lend itself to putting one in. My Parents had a larder, and it was indispensable, all the food was stored in there,  it remained a constant temperature, whereas in the kitchen , with cooking etc. temperatures are always fluctuating, and for a space of 2m x 1m, I would have to have a massive kitchen to have the same amount of storage, so a  larder I have got.

John then double checked my measurements for the metal doors, it was just as well he did! We discussed some other points, including getting rid of the old mattresses, John said that if it was all right, his workman, Carmelo, would have them, as he didn't have much, they certainly know how to humble you! Then John asked if we wanted the bunk-beds, personally I didn't like them at all, they are metal, extremely heavy and ugly, John said again Carmelo was looking for some beds, and as these has originated from the prison, maybe we didn't want them...that explained a lot, and made up Marcela's mind, we wanted one set for a friend of Marcela's, but said Carmelo could have the other, then we went to leave.

I had to three point turn the bike, on a steep incline, and it didn't work, over I went, fortunately Marcela was waiting for me to complete the turn, before mounting pillion, as I had been taught, never try to stop a heavy bike going over, so I just laid it down and stepped away. Marcela was all over me checking for broken bones, I think it had frightened her, well I know it had, because she told me later. The only thing injured was my pride. The annoying part, was that the only thing damaged was the new indicator arm I had bought last week, it was smashed, however everything else was saved by the protection bars.

Back upright, me and the bike! the ignition came on, but it wouldn't start, I couldn't understand this, because it had not had any impact, however I checked everything I could think off, and John came out and did the same, but nothing, the ignition came on, but that was it. I tried bump starting it in second gear, and we were away, before we reached the bottom of the hill, I tried it again, nothing, so our first port of call was a motorcycle electrician, Alejandro, who had a look, loosened a nut, nowhere near where I thought the problem would be, and she fired up straight away, I have no idea what it was, but the problem was solved, we had a great chat whilst he was working on it,and once his Mates next door realised I was a Brit and not from the States, they came round pumping questions, I think I was a curiosity, more than anything else. At the end I was only charged £4, and gave him £6, for me that was a bargain.

By this time, time was marching on, so we headed straight to the Builders Merchants, and ordered the missing tiles, which will be delivered in the morning. We then went across to the Commercial Centre, where we went to the Medical Centre and collected my next months medication, and then had a bite to eat, by this time it was nearly 3pm, before moving on.

Our final call of the day was to the Metal Fabricators, to order the exterior door and windows, but here we started off with a communication problem, and that included with Marcela, so my Spanish was not to blame. The doors here come with a standard lock, key on both sides, inside there is a slide to open the door, but outside you can only access with a key. We wanted a mechanism that could be unlocked, and then use handles to open the doors during the day, and not have to carry keys about all the time. After much discussion, we finally got the message across, and theirs came back, after a phone call  or two, for the mechanism we wanted it would be an extra 70,000 Pesos a door (£21), Marcela nearly climbed the wall. After some negotiation, they suggested we went and if we could find them cheaper, buy them, and they would weld them on at no extra cost, so that's the next challenge. Deposit paid, we returned home.

I then went round to collect Pépe, and he was right as rain, and had been allowed on Maria Elena's sofa, which I was not happy about, but what can you say?

That sums up today, will tomorrow be any better?