Yesterday, I headed off with Henri and John to Medellin, where John took us to an Electrical Supplier, which supposedly would save me a lot of cash, I am not sure it did, but there was some excitement, John had said this was one of the most dangerous areas of Medellin, and never to stray there at night, he had learned the area in the days he had been a Taxi Driver, we heard a loud cheer followed by a scuffle in the street, Henri, being Henri (he is a year older than me!) went running out into the street, four Policemen had been chasing a Thief, and he had been tackled to the ground. You would have thought it was a football match to see the number of people who appeared to gawp!

Anyway, supplies purchased we first headed home to collect John's motorbike, then headed for the Finca, where Henri and I started replacing all the light switches and sockets, and installing a few more. This was the part I didn't like much, because when I asked Henri whether I should turn the electric off, he laughed and said if I did that we would not know if the replacements worked or not, so we were playing with live cables, even though it is only 110v I was not happy, and took my time, as a result, the only person to get a shock, was Henri, and other than doing a little jig in the middle of the room, he didn't seem to suffer any ill effects.

We stopped for lunch, which we had at a restaurant down on the autopista, John came with us, then we continued, until all we could do downstairs was done, we came home about 3.30pm. When Marcela returned later we all trooped to Homecenter to buy some more electrics, and even then forgot some, so have got to go back this morning, after which we did the food shopping, getting home about 7pm.

Today is a later start, and if they have finished painting upstairs we will start there. I will update later!

Later!!!---  Henri and I left to go to Homecenter for more electrical fittings, whilst there Marcela rang me to say that my Makita Bench Planer had arrived in Medellin, if I did the transfer, it would be delivered, so I went to the ATM and transferred the funds, and early afternoon it arrived. However in the mean time, Henri and I had been to the Finca and finished the electrics upstairs and out in the Kiosk, we have now just got one room downstairs to finish and to lay the cables down the garden ready for the workshop, that might now be going by air!... the mains cable comes down the garden from the pylon and just hangs in the tree outside the house, before coming down and disappearing through the groundfloor wall, not that safe you would think, but it was put there by the Electric Company, so the idea is that we will attach the new cables and run them along the mains cable with cable ties, and drop them to the workshop, there is no way this would be acceptable in the EU, but it is something else I have to adjust to.

I have got to buy a 5m pole similar to a telegraph pole, and somehow get it delivered, John suggested we get it delivered by Chiva, one of the old style Buses that runs between the town and the Veredas, apparently they often deliver items strapped to their roof, and drop them, off as they go passed, this should be interesting.

The one thing I was slightly miffed at was Marcela's secret arrangement with one of the workmen, Dorian, he is going to help Marcela get the garden straight, and has been doing some of the work in his breaks, he had cut back the Platano (cooking banana) and it was looking great, in fact Platanos normally are not nice to eat raw, but this variety is just like a banana with a firmer texture, or I should say it was... 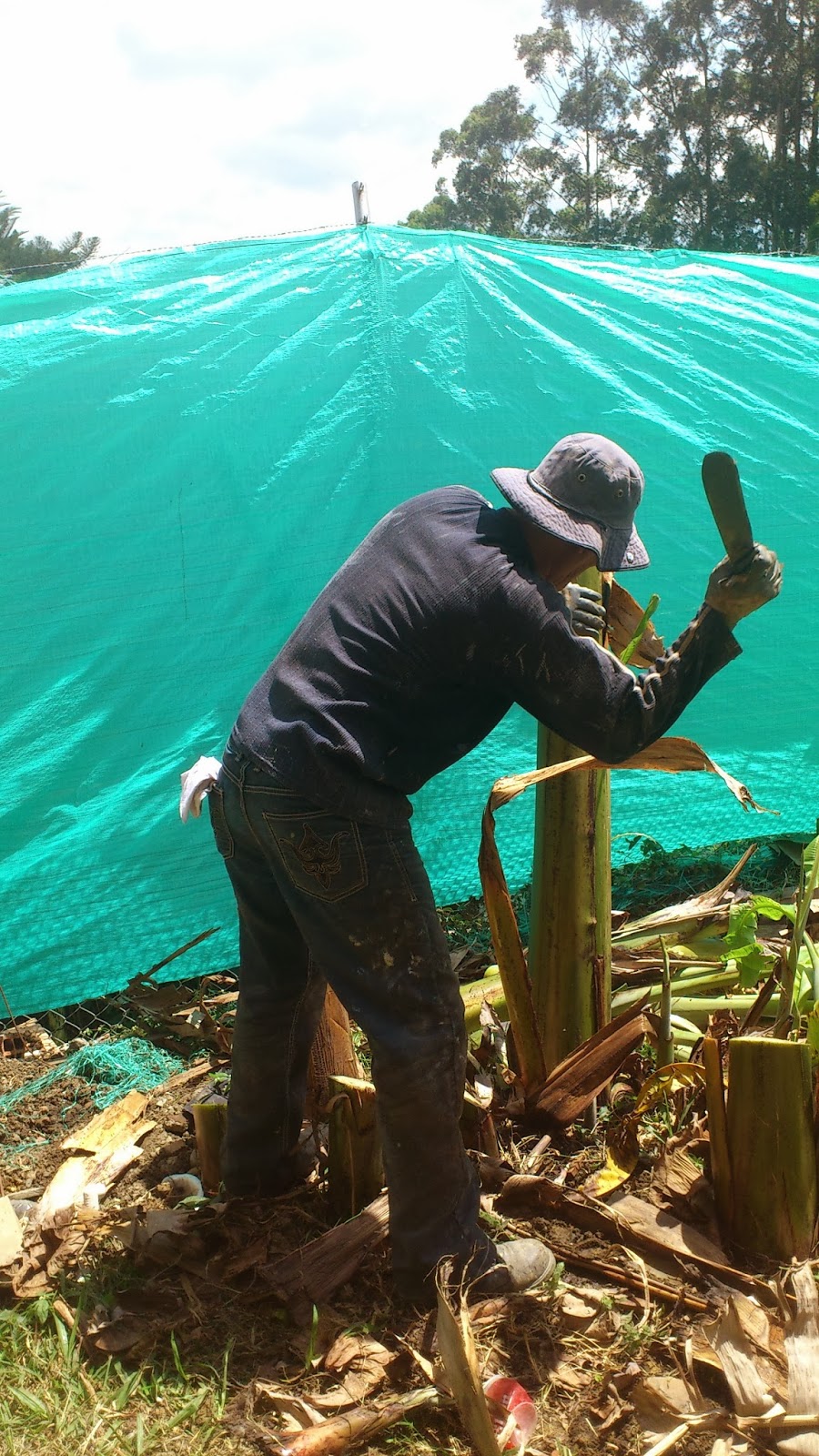 As you can see, Dorian made short work of making the Platano disappear.

The only thing in it's favour, is that it has opened the garden up, as you can see below. 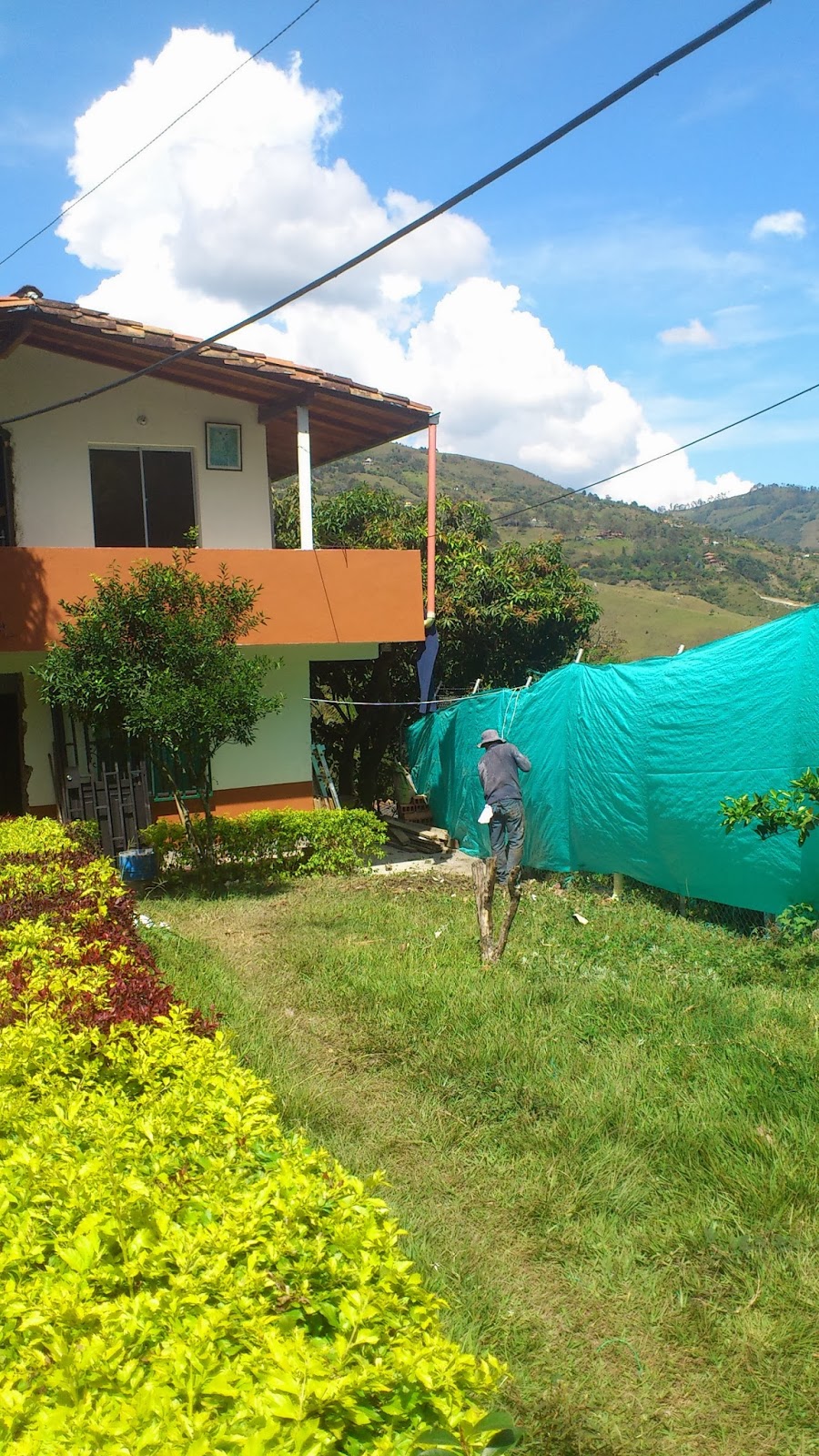 Eventually the privacy screen will come down, and be replaced by a hedge of Limoncillo otherwise known as Limon Swinglea.

At 2pm we packed up and headed home, where Marcela had lunch waiting for us, don't cheer too loudly, Henri prepared it before we left!  After lunch, Marcela and I went out, to price up more items required, and didn't get back until 6.30pm, so not to put too fine a point on it, I am ready for bed.
By Phil Sale at February 12, 2014