I am not sure of our plans today, we had planned to go up to the Finca, as the new kitchen is being fitted, but Henri announced yesterday that he will return to Caucasia tomorrow (Sunday), and come back when the workshop is built if I need help. It is sad, he has been good company, and has mucked in with all the work, I have enjoyed having him here, even if I didn't understand every word he said, I certainly understand more of what he says than I used to, he has been a good laugh!

As he is going, it was decided that he would go out with his 'Girls' for the evening, I was invited, but they didn't leave until 7.45pm and as those of you that know me, will be aware, I am not a night person, so I kept Pépe company!  They eventually returned at 3.15am, I thought a herd of elephants had arrived, what time they will surface is anybodies guess.

Pépe still woke me at 5.30am for his morning walk, which was another event,  I was so tired, I opened the front door walked out to put my boots on, to see Pépe scampering down the steps... I had forgotten to put on his lead, and he is not in any way, shape, or form, an obedient dog, he thought he had found his freedom, and was in no frame of mind to surrender it, fortunately he needed to stop for a scratch, so I collared him and off we went!

It is now 6.30am so until we have a family conference later, I will twiddle my thumbs :-)

Update:  We left late morning, calling in town, then went up to the Finca, and saw that all the wood had arrived, including the telegraph pole,

unfortunately now the rear of the house has been cleared, it has been established that there has been some erosion, over what period of time we don't know, but to ensure there is no further problem there needs to be a retaining wall,

and therefore my budget has gone out of the window, it has meant I have had to cancel some of the other work, they are jobs I can do over a period of time, it will just take a bit longer, it is disappointing but necessary.

Work on my workshop is due to start next week, they have already started digging out for the foundations 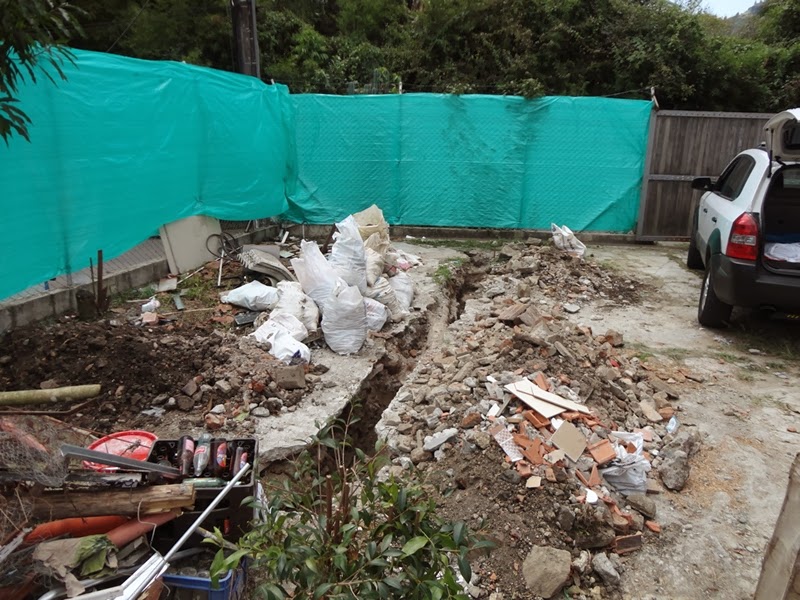 As part of my budget cuts, I will now go out and source my own doors and windows for the project.

I have to say that I am more than a little upset with the Surveyor we hired before making the purchase, but it seems here that there is little regulation, and no come back, I might as well have saved the money and had a harder look myself!
By Phil Sale at February 15, 2014