What a day... Marcela left early, to attend to bits and pieces, before the important appointment... her nails! and then handing in the key to the apartment.

I was left with Pépe, and the workmen. A lorry arrived to take away our rubbish, and at the same time Mauricio (the Mayordomo) arrived from the estate at the back, to take anything that resembled wood, he was telling me that every Saturday, when the Villa is rented out  for parties, he leaves them a barrow load of wood for cooking their sancocho, al fresco, and charges them 100,000 pesos (£30) they always complain it is expensive, but as he says, he does not have an unlimited supply, and has to buy it in, unless, he can get some freebies, such as from us.

I then had a conflab with John, over more plumbing problems, and told him about our latest problem with the kitchen, nothing to do with him, but he has been following the saga, of the stainless steel worktop/mezon, which it turns out is not so stainless after all. Last night Marcela was clearing up, when she discovered what look like rust marks coming through the stainless steel.
As you can imagine. she is not a happy bunny, I have to admit, to not being that thrilled myself, it looks as if the whole top will have to be cut out and replaced, if that is the case, certainly not with stainless steel again.

There were then shouts from Mauricio, it turned out that Pépe, had decided to make his way down the bank at the back of the house, and explore the Estate, and he was having great fun, however Mauricio, said it was not a problem, he was just concerned, because he was using an axe, and there are access points to the underground river, which if Pépe fell in, he probably wouldn't survive. So everyone was calling him, and he appeared, as if to say, "What's the fuss about?" and as soon as anyone got near him, off he went, like a rocket, it was great fun...for him! Eventually one of my workmen grabbed him, and clambered up the bank, with Pépe wriggling for all his worth, which considering most of the bank has now been dug out only leaving a one foot ledge, was damn dangerous.

The workmen are putting in supporting pillars, then a concrete beam the full length of the boundary, and infilling with rubble, to be topped with concrete, we are told there is no danger of the house going down into the neighbours garden, but it gives me peace of mind to know as least it will be solid for a metre, before dropping down to the estate below.

Later this morning Pépe did it again, but after much calling back he came under his own steam, and he went on his chain, I then told Ramillo, that in future, he must either put Pépe on his chain, or call me to do it, when the rear access is open.

I then finally managed to get some work done, I put up the wall bracket for the TV in the lounge,     prepared and ate lunch, by which time the sun was cracking the flags, and the two workmen were still preparing concrete by hand, filling paint buckets, heaving them onto their shoulders, and carrying them to the back of the house, to prepare the pillar bases., how they did it, in that heat I have no idea, I take my hat off to them, however just after 2.30pm, they packed up, saying there was nothing more to be done until tomorrow.

At this time, I was fitting and cabling up the security light for the workshop, when I eventually get some power.

The workshop is just about complete now, it just needs painting and the wood preserving and staining, Ruben came back with Marcela this evening, regarding the problem with the window, he had the last laugh, Ramillo had put the frame in upside down, once it was rectified, both window panels slotted in nicely. Ramillo will have to make good the render tomorrow. 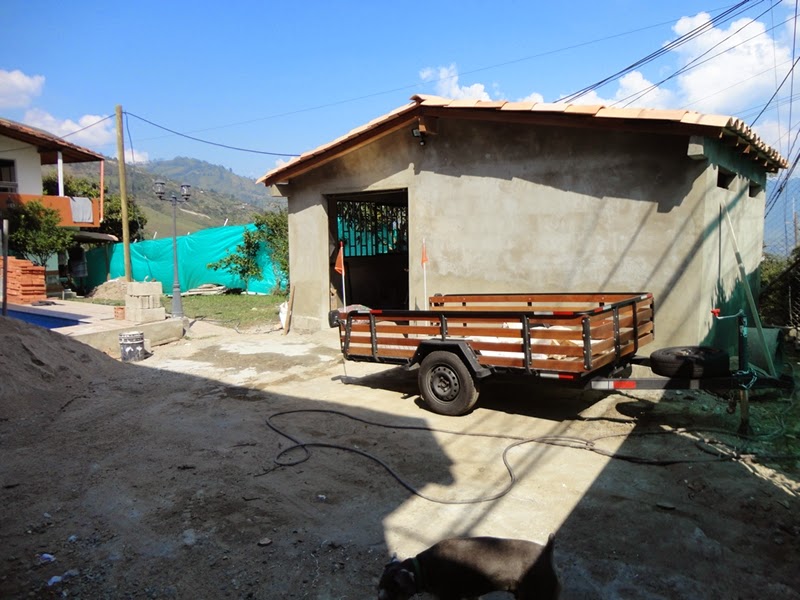 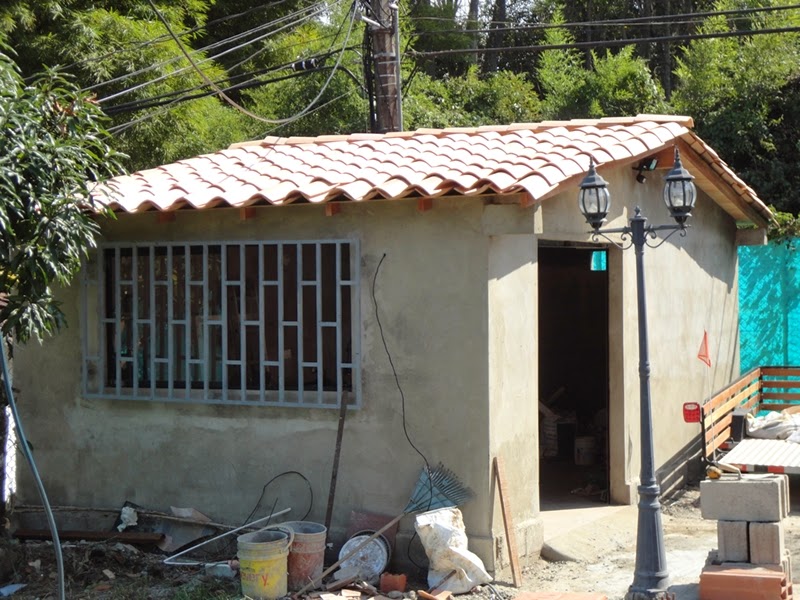 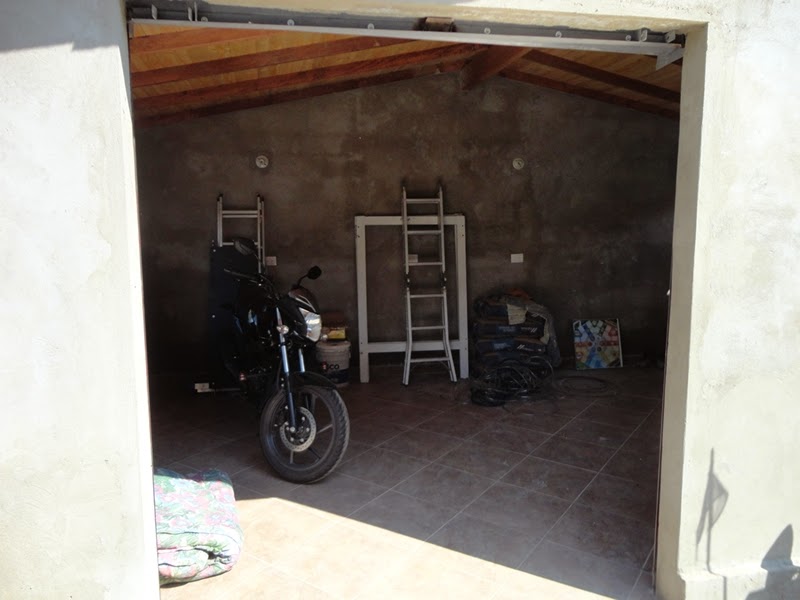 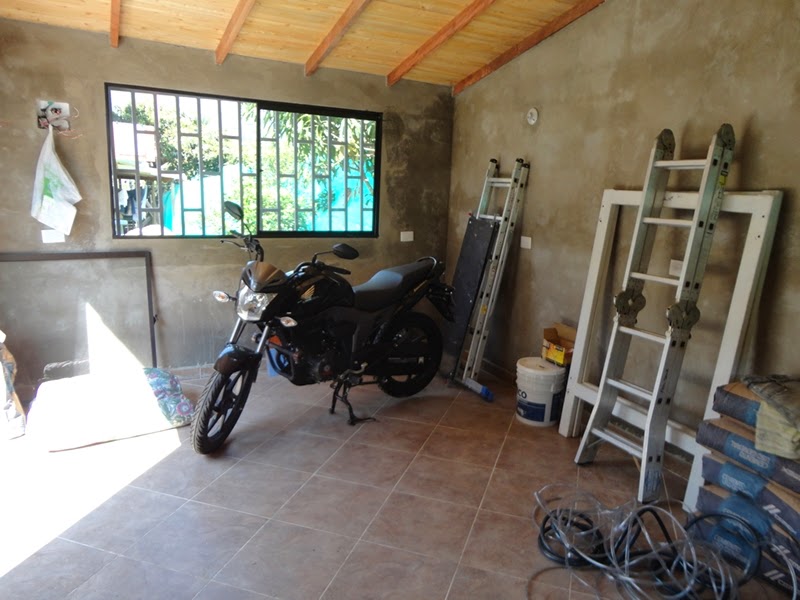 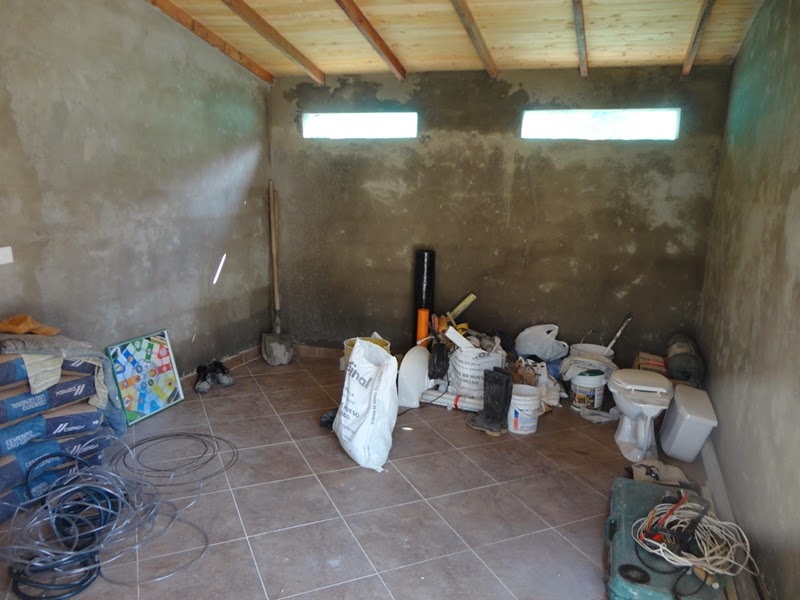 As you can see, once I get rid of all the Builders possessions, I will have a nice little workshop, well little in comparison to Spain that is. I will probably keep a space for the bike, it makes sense to protect it both from the rain and villains, by keeping it inside, with a cover on to protect it from dust.

The two air vents at the rear of the workshop, installed both for ventilation, and a natural dust extractor, will at some stage have wooden hinged shutters, installed, for security, in addition to an alarm.

Once I had installed the security light, I started some work on the main gates, I greased the runners, to help Marcela, who was struggling to heave it open and shut, it is certainly better now as my fingers will attest, I was doing a trial shut, and it took me by surprise, trapping my fingers, between the gate and metal post...ouch!

That done, I then stained the outside of the gate, after which the light was fading, and I called it a day, shortly afterwards, Marcela arrived with Ruben, the result of which you already know.

Marcela, informed me this evening, that the Company who supplied the toilet combos, is sending someone out tomorrow afternoon to see what is the problem with the toilet, hopefully we will get a result.

Marcela handed in the keys for the apartment to the Letting Agent, and we received a refund, for what I am not exactly sure, but she told Marcela, that she was sad to see good Tenants go, I bet she says that to everyone, saying that, we have always paid on the day, and never caused a problem, so maybe she was genuine.

That's it then, another day, done and dusted!