I have top admit to not having done much today... I just couldn't summon up much enthusiasm!

Mauricio arrived fairly early to cut down the part of the Mango tree, causing problems with the kiosk 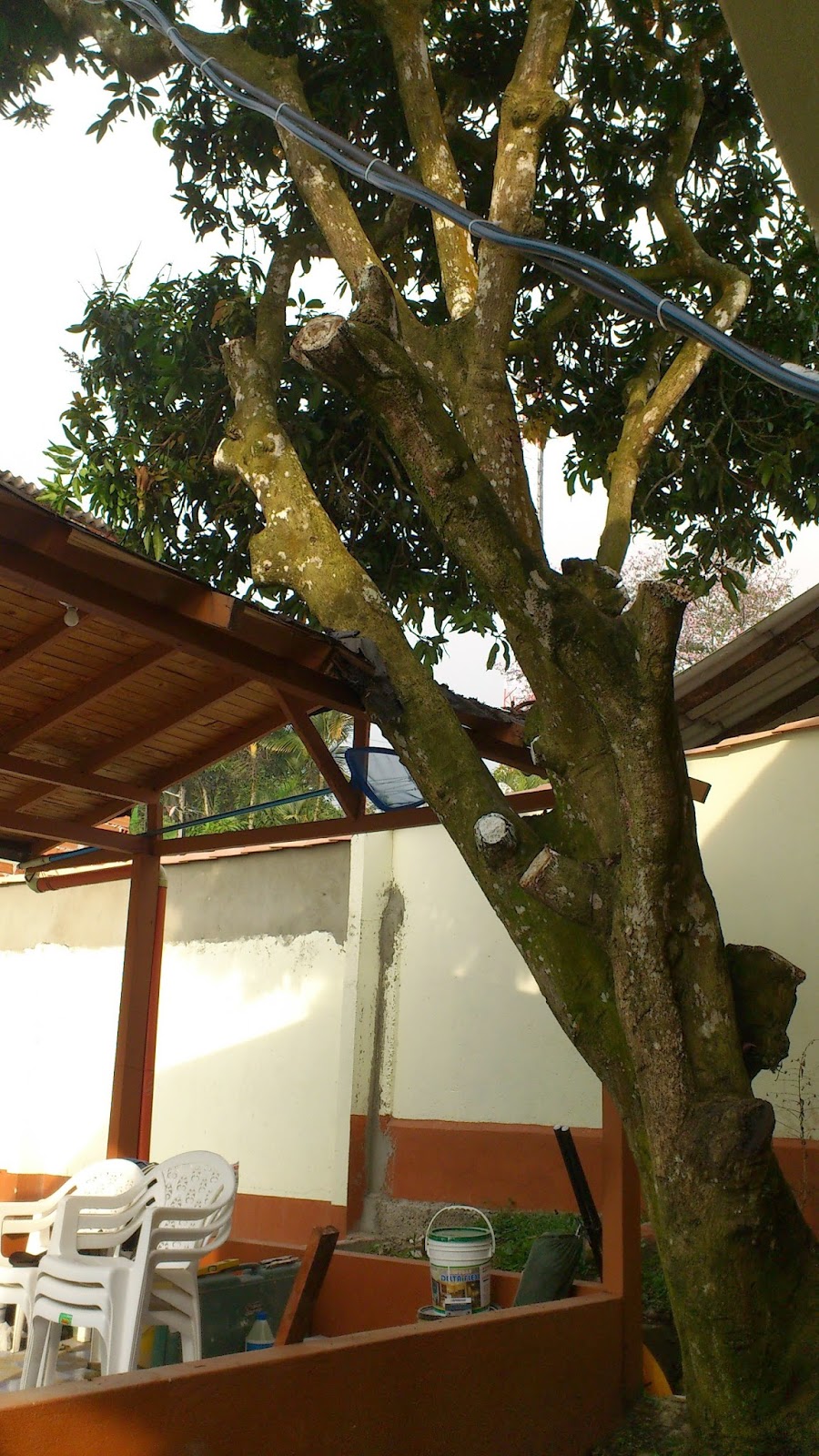 As you can see, the tree was causing a problem for the kiosk, I suspect from the roof timbers, that the roof was originally built around the branch, but didn't allow for future expansion.

The problem then became one, of do something with the tree, or pull down the kiosk, as the tree no longer provides much fruit, and there is no where else to site a kiosk, there wasn't really an option. The tree was slowly cracking the supporting beam, so Maurico clambered up into the tree, and using his machete, started cutting back the smaller branches, unfortunately, I have no photos of the event, because I had to take an active part.

Then it was time to set to work with the Axe, I have to say that although he obviously keeps it very sharp, it is probably the most dangerous axe I have ever see, the original handle having broken years ago, there was a well oiled piece of timber, crudely shaped, and wedged in place with 3" nails, I made sure I kept out of the firing line!, I wasn't that happy that Mauricio was not taking the main branch down in sections, he had it well tied off, to stop it dropping, but it could easily have swung into the house.

As it turned out, it came down...slowly on the edge of the kiosk roof, breaking the supporting beam, but that was not entirely unexpected. Mauricio then lowered the branch to the ground, and we carted everything off to throw down onto their estate for fire wood, as a result, he would only accept four quid for doing the job! 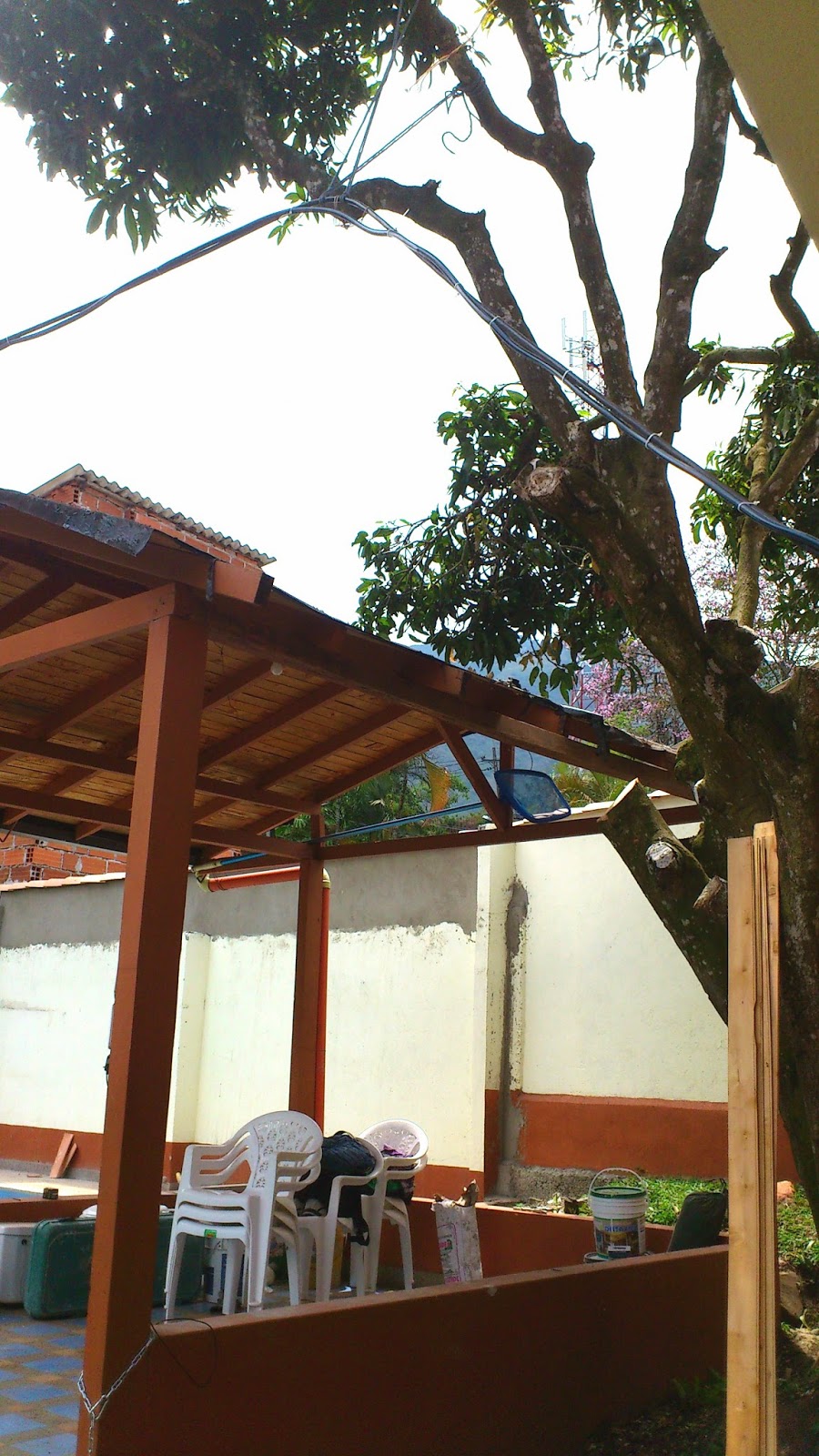 Now the Kiosk roof is clear, I am going to have to do something in the future regarding the mains cable, also now the workshop cable, that go from the house, via the mango tree, if that branch breaks there are going to be a few sparks flying, maybe another telegraph pole, I really don't know at this stage.

Fortunately, we had a couple of old beams lying around, so I cut one to size, and sanded it, then using another timber to jack up the roof, I was able to get the beam in behind the broken one, after which I clamped the two together, whilst I screwed through the broken beam into the replacement.

This afternoon, I put up the ladder, to clean up the space where the tree had been resting, so I could cut and replace sections of the roofing boards. I found that the local population of cockroaches were living under the old roof felt, so down I went for the spray, and they went flying in every direction...now I know Marcela can run!!!! Anyway after the distraction, the job was completed.

Finally today, I went out in the road again, and cut down the 12' cactus, that had made it's home on the boundary, I had to use my saw, as there was no other way of dealing with this, it was so big, I am now left with a 1' stump, and I am hoping that some kind soul will remove the cactus pillars that are now lying on the verge, every other bit of rubbish has been taken, so maybe this as well.

Whilst I was doing that, the workmen, have all but finished the work at the rear of the house, the final concreting was done today, they have just got some bits to finish off, and then they are moving on to the next and final project, that is the parking area, and ramp from the road, they reckon another week should see that done, but as it is a Public Holiday on Monday, it will probably be nearer two.

Tomorrow morning, we are going to catch the bus to Niquia, and then the Metro to Medellin, to collect the car, and buy some more stain, and paint, so I won't be doing much work here.