It rained all night, which helped fill the swimming pool, it was nearly full by the time we got up, no walk this morning, even Pépe poked his nose out of the door and wandered back to his bed!

When the family eventually arose, we found that their first night had been something of a disaster, one of the big inflatable beds, and the single left by Don Pedro, had deflated, leaving the occupants on the floor. Marcela suggested going to buy two more, but I didn't see the point in wasting money, we needed bunk beds for one of the rooms, so why not get them now. The problem was that it is a Religious holiday, and many shops are shut, but we decided to give it a shot, and off we went, at this point I have to say, I had no problems with the gear box, but I know there is a problem, Hernan thinks it is just related to 4th gear, and he can fix it next week, we are taking the car on Saturday for him to assess.

The first shop we went to, was shut, shame, they had a lovely set of bunk beds, we had seen before, anyway, on we went and found one open, yes, they had bunk-beds, so we followed them upstairs, and the one they showed us looked nice, wood veneer, although he tried to pass it off as oak, but at the price, we said we would take it. They offered us transport if we could wait 20 minutes for the man to return from his previous trip, so we did.

When the Transport arrived back at the shop, it was a pickup, and when the owner told him where he was going next, he said he couldn't go, when Marcela asked why, he said he hadn't got a driving licence, and wasn't going on the Autopista, he must have been in his 60's, so he has been lucky up until now! Anyway Marcela assured him there were no Police about, despite us having passed a few on the way, so he loaded up and off we went.

We arrived home without incident, they unloaded and off they went, and I started to put the beds together, with Marcela's help, but it wasn't a case of just building them, it was a rebuild job, all the holes had been drilled by hand, and were somewhere near right, but not spot on, so some alterations had to be done. As for the ladder, he had supplied two drywall screws to attach it to the bed frame, I wouldn't let anyone try to climb it with screws, so I adapted and bolted it together. Then we came to the two bundles of slats to support the mattresses, I cut one open, and Sebastian immediately noticed it was crawling with ants, so I scooped them up and chucked them outside, having just had the house fumigated, I wasn't about to put us back to square one, here they don't usually use proper bed slats, they use pallet boards, which are all shapes.

Marcela sprayed them all with Raid, and then I started assembly, only to find that although they fitted the top bunk, they were 1cm too wide for the bottom, so I had to trim them all to size, once fitted, I screwed them all in place, and job done, but by this time it was late afternoon.

I started carting my tools back to the workshop, only to find a load of mad souls in the Pool, it was freezing! 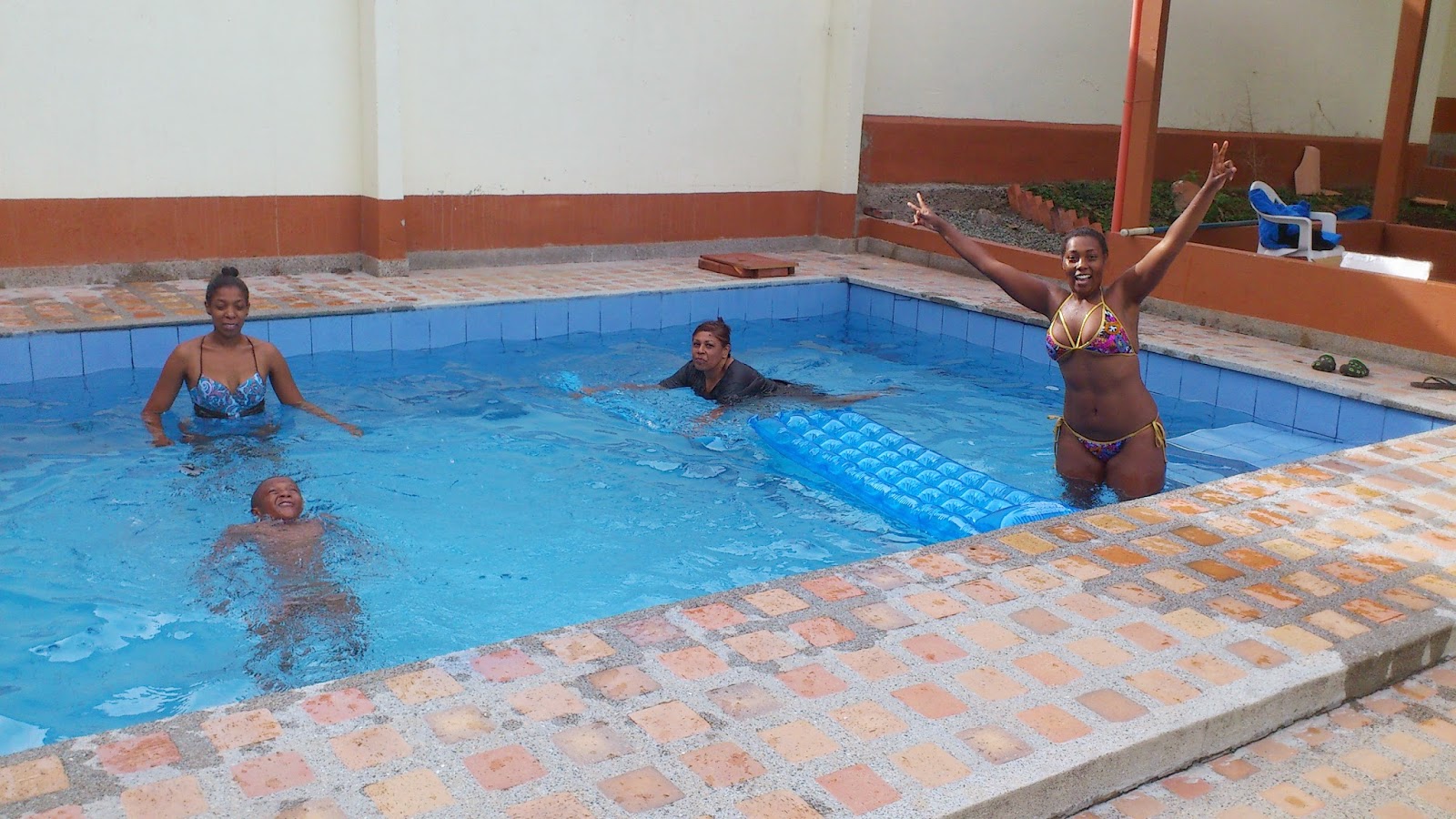 One of those poor souls should have known better!

Anyway, I let them get on with it, I will need a weeks worth of sun, before you will tempt me into that.

Next was helping Marcela try to get the pump and filter we bought to work, and up until now, we have not had much success, so will try again tomorrow.

Lastly, we had to fit the new cover, we unrolled the cover, and pulled it across the pool, I then drilled holes to match those in the cover, and fitted removable hooks, using bungee cord to make loops from the cover to the hooks, job done... well Pépe thought so, he was chasing a moth, and ran straight out into the middle of the cover, and panicked, fortunately coming off when called, but I wont say he has learned his lesson, because I am sure it will happen again.