0530hrs rise, and after the usual morning commitments we were out of the door just after 6.30am, and outside the Medical Center in plenty of time for my appointment, but the place was late opening, and the Doctor didn't turn up until 7.20am, they can hardly complain if Patients are late. when they can't make the effort themselves.

That said, Doctor Ana  was very pleased with my blood pressure test results, all well within limits, I have lost another 2kg, and my BP was fine, that was a good start to the day. The Doc then went on to say that we could both have our eyes checked through the Health Service, cheaper than going to a High Street Optician, so we will do that on our return from the UK.

It was then time to join the Dentist queue again, first appointment was with the Hygienist, she was pretty gentle in comparison with some I have met in the past!  Following that it was the Gum Specialist, who said I need a full mouth X-ray, then an operation, as there is a problem with the bone, one tooth is loose as a result,  something else to look forward to after our holiday. Finally in to see the third Dentist, for two fillings, fifteen minutes later, job done, and out for breakfast.

Leaving Copacabana, we picked up Maria Elena (Mother in law), who is staying for the week-end, and went off to the commercial center, I needed some new trainer type shoes for working about the house, mine had just about rotted off my feet, working in wet and humid conditions, so I went off by myself, and found what I was looking for quite quickly, which was a surprise, because I have trouble finding size 44 here, they all seem to have small feet, and I thought they were relatively cheap at £24, Marcela and Maria Elena nearly had a dickie fit, they said I should have paid between £6 -10 maximum, I'm not sure how long they would have lasted, or how comfortable they would have been, but maybe next time!

We then did a food shop, and on the way home, stopped to have lunch at Mi Gallo Tuerto, at £15 for three of us, including drinks, I think even I am in for a shock when we return to the UK!!!

Back home, Maria Elena had a brainwave, why not use some of the tiles we took off the zona de ropa, to tile Pépe's kennel...Yes, why not, and why hadn't we thought of that?

That is one project totally completed, now it is back to painting, and I decided to continue by painting the perimeter wall alongside the swimming pool, you can see the difference, in the following photo, I will finish painting the white tomorrow, hopefully. 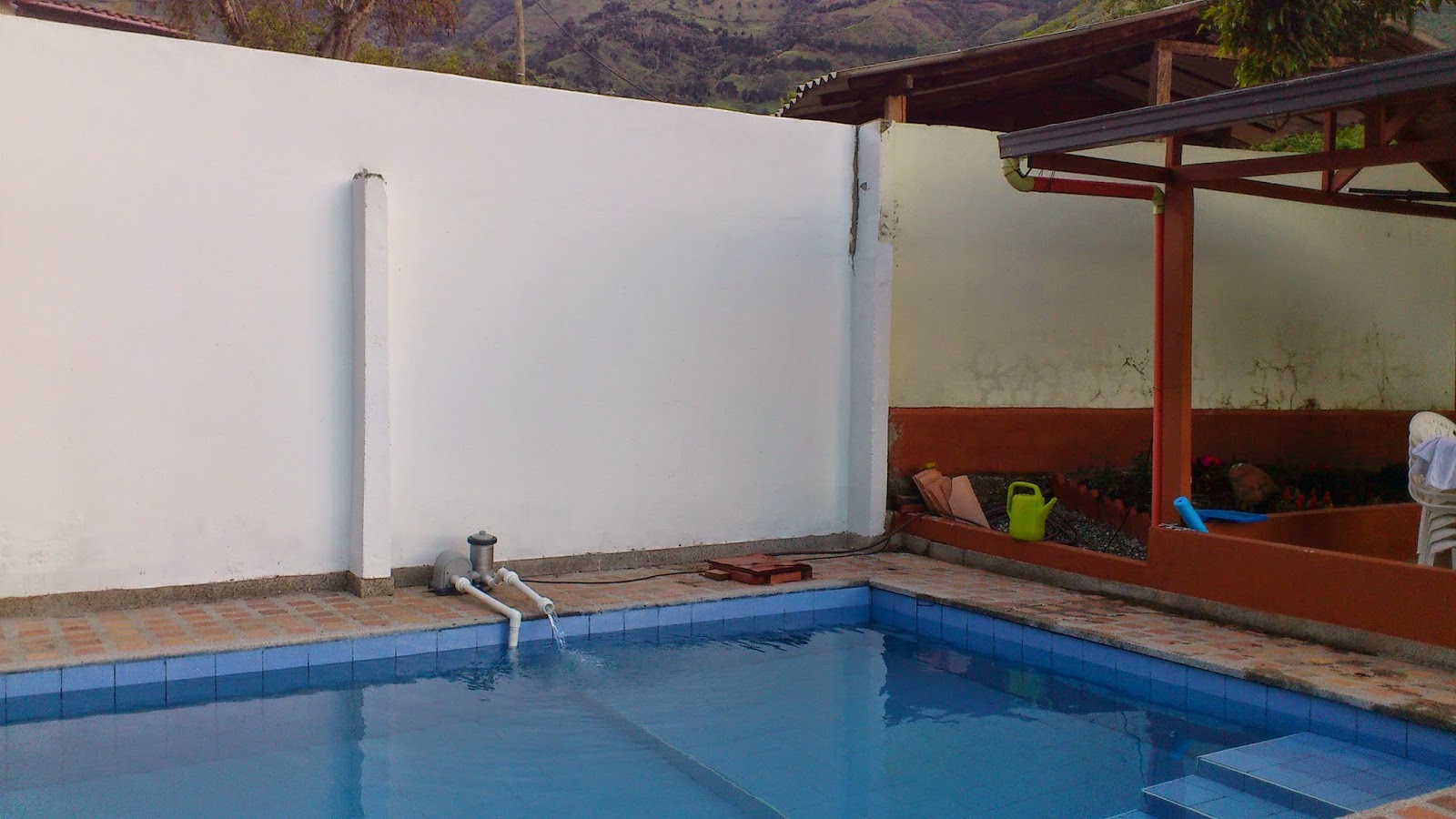 The Father in law, Henry, was supposed to be arriving on Monday, but he phoned to say he will be delayed a day, as he has some work he must finish, I hope it is only a day, otherwise we will have to think about kennels for Pépe, and that is a bit short notice.