Not much else to talk about today, we left home at 10.30am, it was already baking hot, what a contrast to yesterday. We arrived at the Show in Medellin, there were already quite a crowd in the event, which was held in six different Halls, all interconnected, and an outside Demonstration area.

Marcela appeared pre-occupied by the number of scantily clad women, but as I told her, it is the same the world over at Motorcycle and Car Shows, and to be honest, not many of them were up to the job anyway.

There were loads of Motorcycle manufacturers I had not even heard of, most of the bikes were 650cc or under, for some reason, probably the cost, Colombians don't seem to go for the higher powered bikes, but that did not detract from the interest, there were many new models on show, including a number with two front wheels. 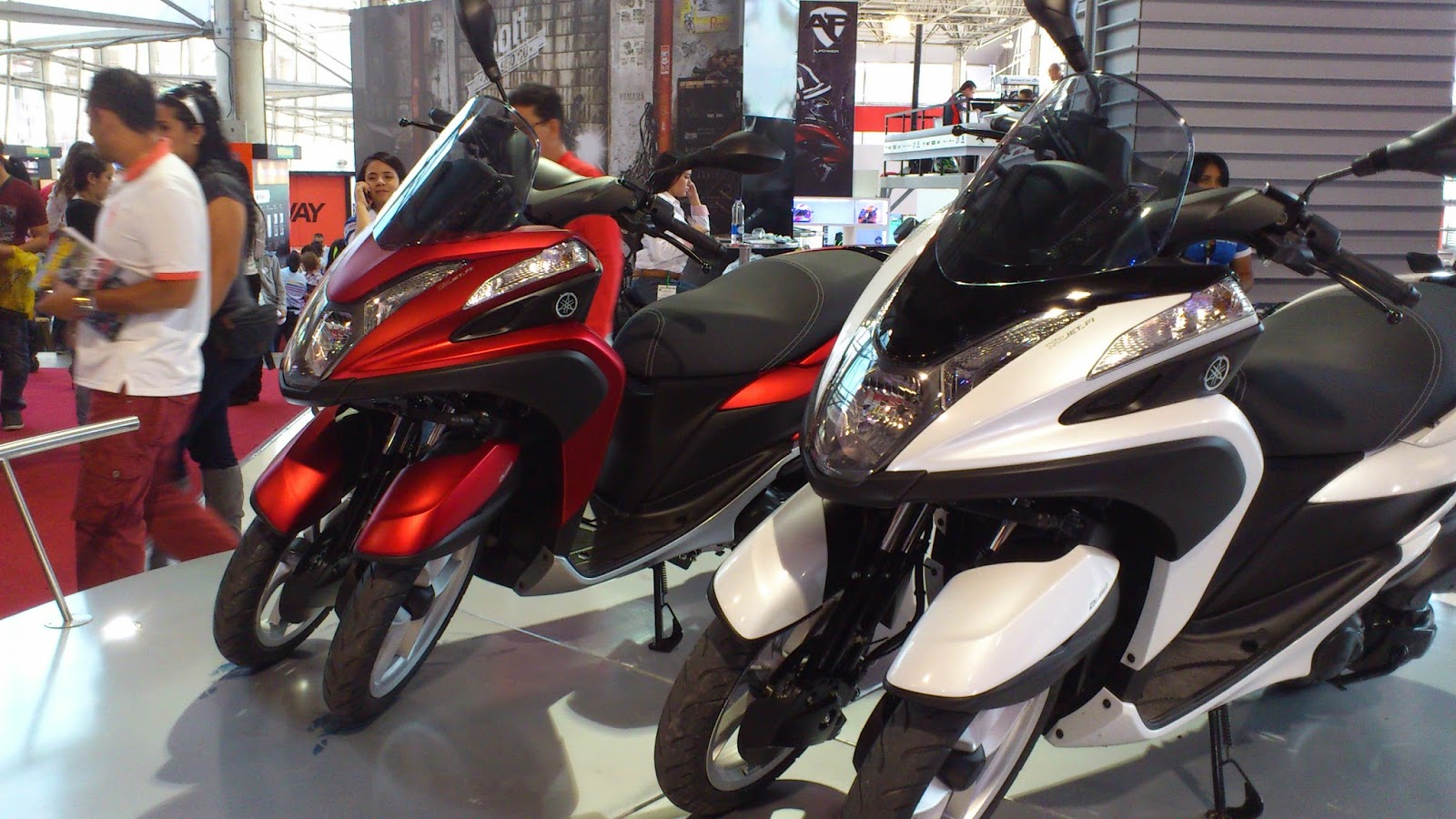 Such as these, which to be honest although a novelty, look highly dangerous, I would think if you hit a pothole with one wheel, it would throw the whole bike off balance.

They also had Scooter type flooring setup, so I am not sure if they  are classed as bikes or not.

Talking of scooters, Marcela was besotted with the things, as you will see in a minute, what the attraction is to scooters I have no idea, I had a Lambretta 150cc Scooter in my younger days, I had only been out on it 20 minutes, when I banked into a corner, caught the floorboard on the road, and went flying, I couldn't wait to see the back of it, but it served a purpose!

From there we looked around the accessories, and went outside for lunch, and waited for the demonstrations /shows to start... and waited...and waited, then a procession, of Harleys and other big privately owned Bikes came into the arena, I think that all the Clubs had come on their bikes and had free entry as long as they took part, but there was no end to it, and we were frying, so in the end, we gave up and left.

However it was still an interesting Event, it certainly firmed up something in my own mind, I now know that I have lost the passion for biking,  I had no longings to own any of those on display, and I am happy with my little bike, it serves it's purpose of getting me around.

On the way home we stopped off to buy a sack of dog food, and then went to a Couriers in Copacabana, they had contacted us in the morning to say my parcel had arrived from Bogota, it was the two Riddex Units, to try and stop the insect life in our house, whether they will work is another matter, they are both plugged in, one upstairs, the other downstairs, now we will just have to wait and see.

I apologise for the photo layout, for some reason the site isn't playing ball tonight, however, if you click on any of the photos you will see an enlarged version.