Pépe tried to get me up at 5.30am, but I played dead, and he went back to bed...for half an hour!!  we went for our walk, an  this brought something to mind, someone asked me how we ever get our mail, if properties don't display their house name, which we do,  but this is the answer:
If you look under the name plate, to the left, are a series of numbers showing  'from' (de) ´to' (a) these are the meter numbers of the houses further down the road, ours is the same, the meter number is scribbled on your gate post, and bills come to that number, it works even if not very efficient, because only Utility bills come to that number, everything else goes astray, we are having more luck now we have a name plate, the only problem is that there is another 'La Palma' in El Zarzal, and it is bigger and better known than ours, so we have to extend our address to include, Sector La Chosca, which limits where we could be, it is one of the downsides of living in the countryside.

After coffee, and a look on the internet, I headed off for HomeCenter, I bought an electric stapler yesterday, and it didn't work, there was no problem, I was given a credit note, and just went into the store and picked up another Stapler. On the way home, I stopped and picked up our breakfast, Pastel de Pollo, which we had with a coffee, and then it was back to the workshop, I couldn't believe it, the second stapler didn't work either, I had thought of asking them to test it before I left, but there was a queue!

I decided to return later, but first I wanted to get the kennel tiled,  this is where I was up to: 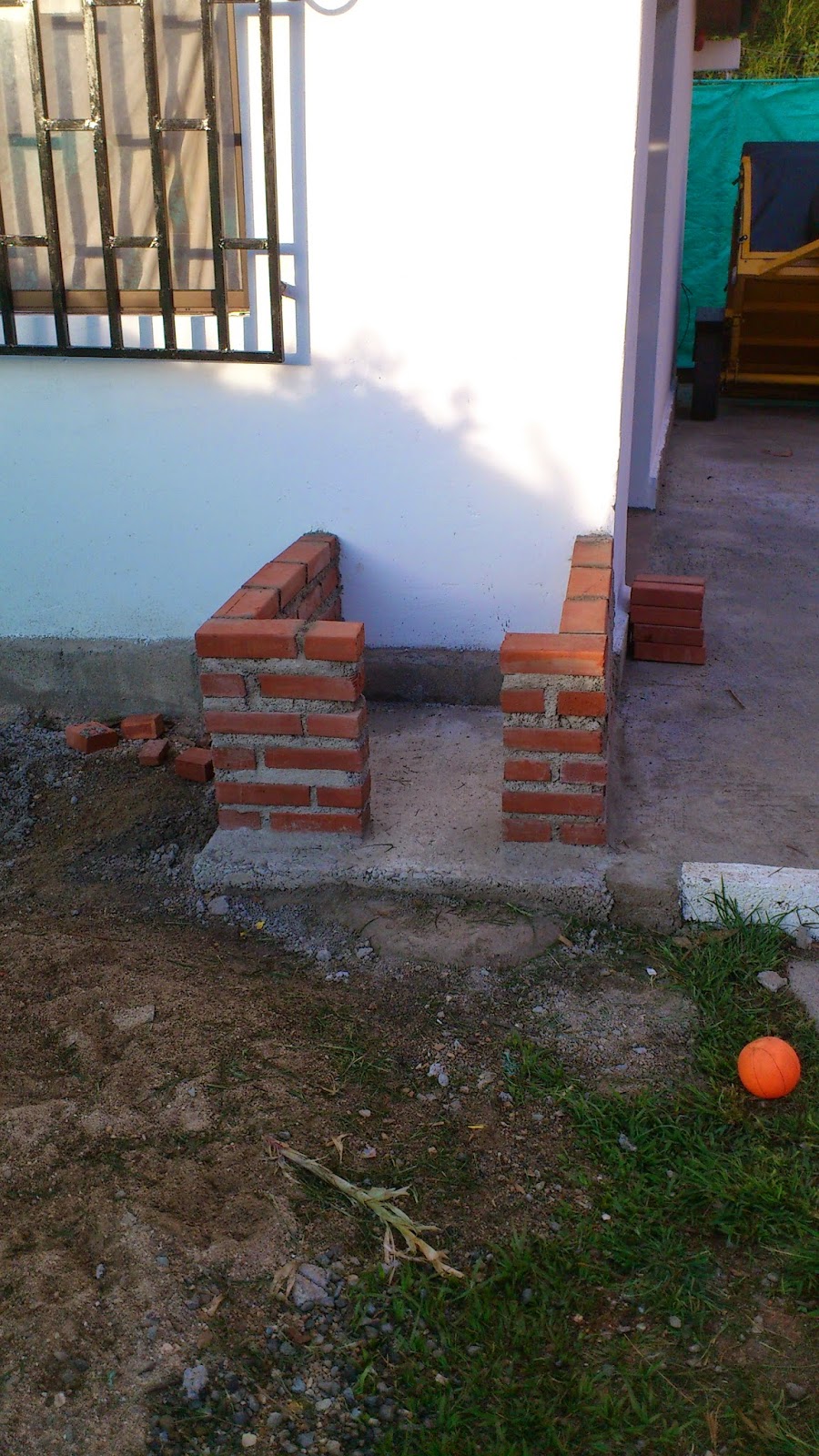 rather than put a concrete and tile roof, I decided that it would be of timber construction, but the tiling had to be done first, and to be honest it is not my forté!


At least I got a slope towards the entrance, so if any rain gets in, it wont leave Pépe lying in the wet... and No Peter! the slope is not so steep Pépe will slide out, ha!ha!

Then it was time for the woodwork, I enjoyed this part, back in the workshop, using the old adage, 'measure twice cut once', we got there. I didn't have to buy any timber, it was all offcuts, from work I had done or had done on the house.

Then it was back to HomeCenter again, the toll road charges were adding up, and I was not happy, different person on the 'Returns' desk, but very helpful, he called for a lad from that department, who came, and they went in the back with the Stapler, I could hear it banging away, and I cringed at every staple I heard firing.
Out they came, "It is working fine Sir", he then proceeded to demonstrate, and yep! it was working, he then told me that the one I had returned this morning was fine as well, I started to apologise... well it was more of a grovel really, but he told me not to worry, and back home I went.

Back in the workshop, no, the stapler was not working, what could be wrong, as I had done earlier, I tried it in every plug socket in the workshop, nothing!!!! then I had a brainwave, we have three pin and two pin plugs here, the three pin being earthed, so there is only one way it can be plugged in, but the two pin, normally have one flat pin wider than the other, and the pug socket will only accept it the right way, however some plugs, have two pins the same size, as did the Stapler, so I turned it round and 'bang' it fired a staple, yep, that was the problem. So back to work.

Finally I got all the wood frame fitted, and only one screw used in the whole process, and no nails, which brings me to how it was constructed, I didn't want Pépe getting injured by a stray nail or screw, so I used 'No Nails', and it appears to have done the job. The roof is OSB which I have attached to the frame using my air-nailer, but these are embedded in the frame, so no danger to man nor beast!, that done it was then felted, which is where the stapler came in. The felt itself is self-sticking, you peel off the backing paper, and the sun does the rest, but I wanted it to fold over and under the board, to make it weather tight, so that was where the staples came in.

It is weather tight, but as and when we see some seconds roof tiles, I will probably put them on top, just to make it look better, but that is not urgent. Pépe has been in, but he still hasn't worked out that this is his domain, it may take a day or two. As you can see, Marcela has put his towel in, and we keep throwing his toys in, so he gets the idea.

I will know in the morning for certain if it is weather tight, because it is bucketing down with rain at the moment!  So hopefully, Pépe now has his own 100% shelter if it is sheeting down whilst we are out, and he is in the garden.

Whilst I was doing this, Marcela has been working her socks off, she has been weeding her borders around the Kiosk, and landscaping it, it looks really nice now, unfortunately it was going dark by the time she had finished, so I will take a photo tomorrow.