Time for a Holiday!!

We both had a broken night, all to do with nature, I ended up, out and walking with Pépe at 5.45am, then after a coffee, it was time to work, today, I decided to make a start on Pépe's Kennel, it will only be for use during the day, unless he decides otherwise. It will be brick or block built, I haven't made a final decision on that yet, there are not quite enough bricks left over from the BBQ to build it, but I might just buy a few more, buying blocks is the easy option, as they are bigger and it would take less time, but the bricks would look better, and I think do the same job. Pépe can often be found lying under the BBQ, so it must be fairly cool.

Today was construction of the base, I decided it would go alongside my workshop, it will get the morning sun, but be protected from the heat of the day, and give him a good vantage point both of the comings and going at the house, and also to his favourite spot, watching people passing on the road.

I had a number of lengths of 1/4" rebar, which was to be used for the septic tank covers, I had already made the form out of wood planks, so I cut the rebar to fit, and wired them together, then came the concrete mixing, no mixer here yet, so back to the mattock and a wheelbarrow: 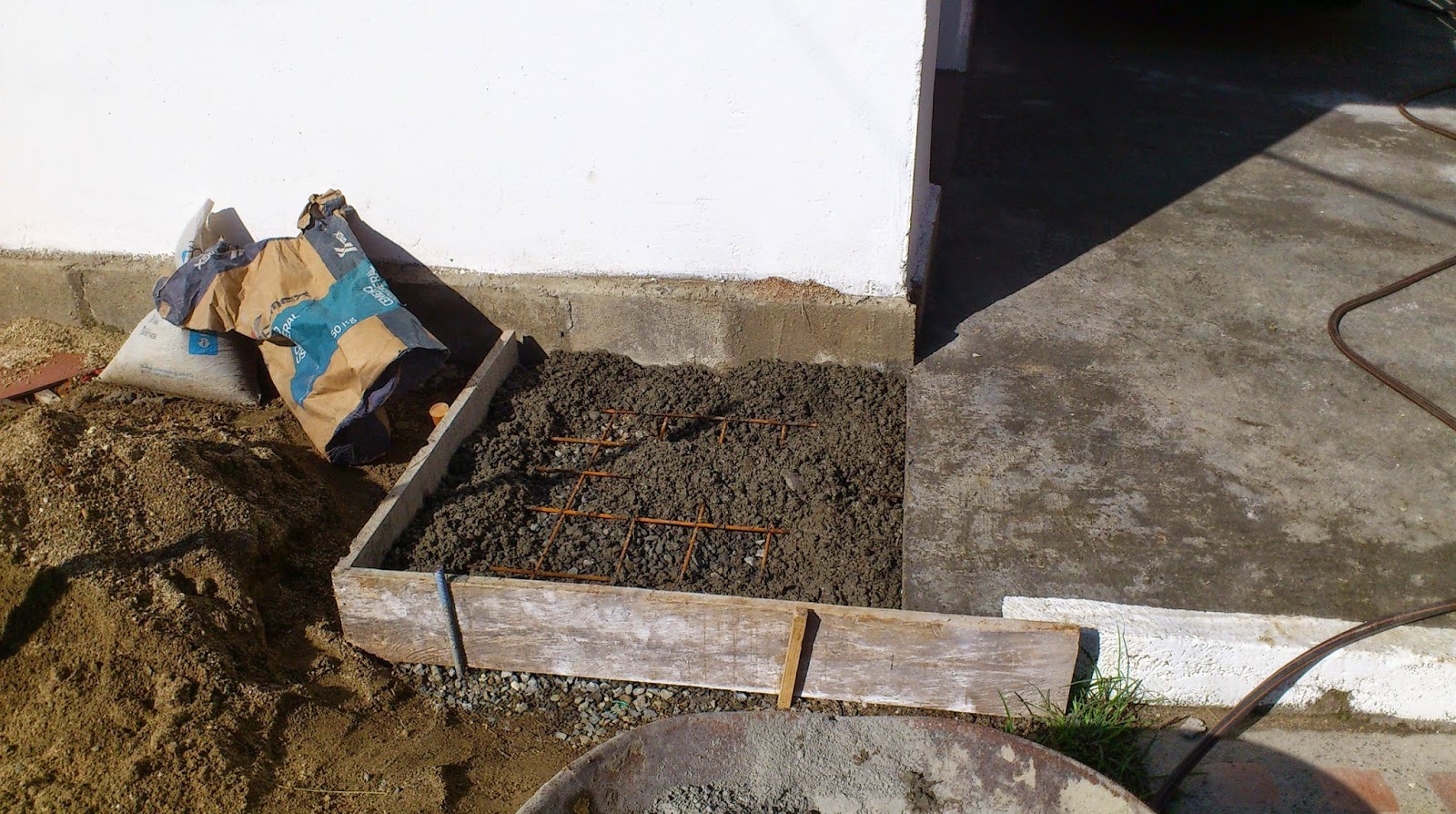 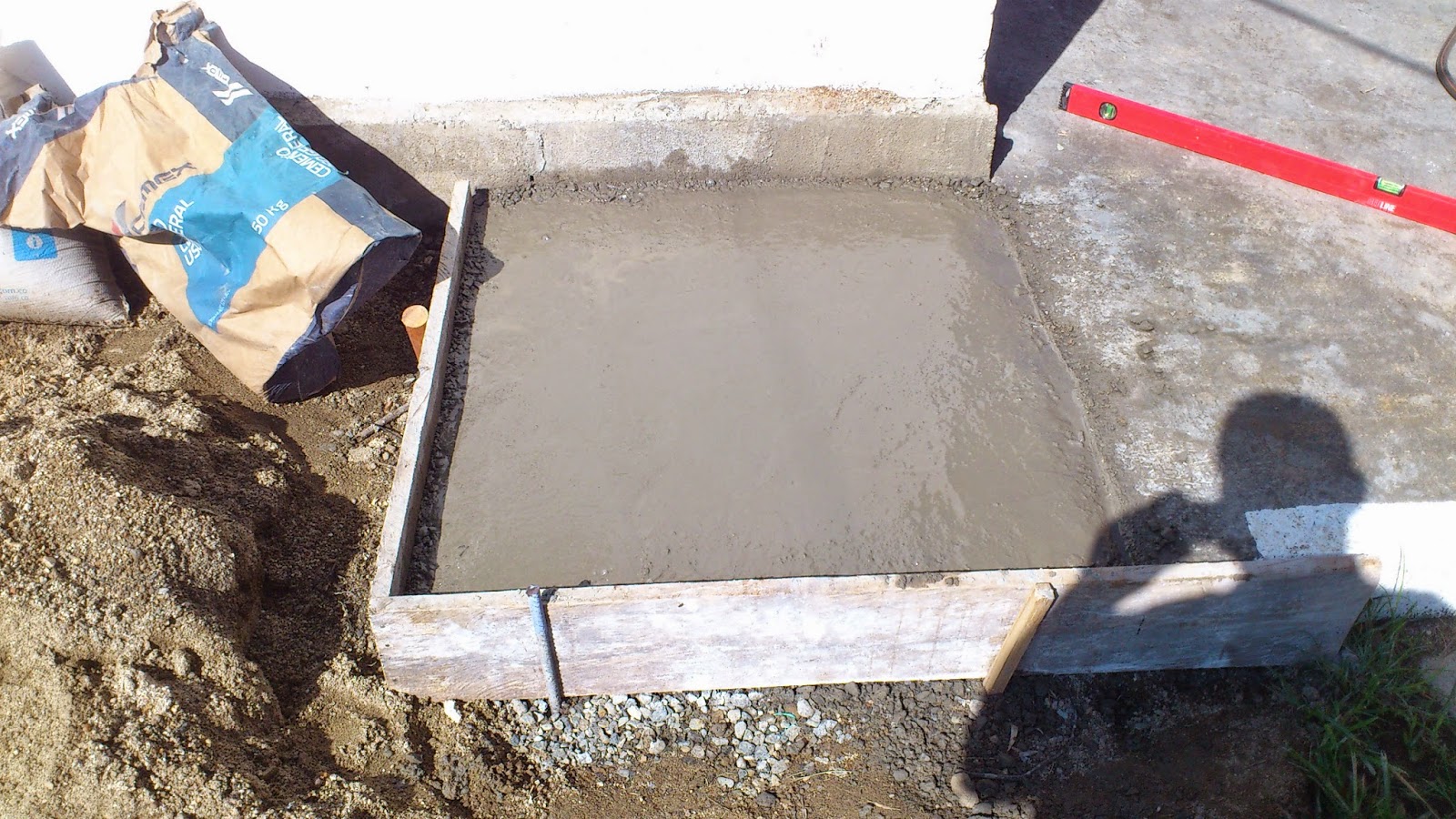 It didn't take that long, I had a good mentor, when I was in Cadiar! (Thanks Pete!)  I was going to make it higher than the existing drive, but decided, that might be a danger to foot traffic, instead I created a ridge, so any water will run off to the front, there is also a slight slope, so that if water does get into the Kennel, Pépe wont be lying in it.

That done it was all covered up, before it was covered in paw marks.

Then it was computer time, for some reason my computer would not connect to the internet, so I ran my virus checker and also a malware program, eventually it sprang back into life, just as we were due to go out.

We were going for a meeting with the Boss Lady from SURA the Health Service Provider, to reapply for the complementary health plan, it gets me to see Specialists quicker, and a private room if I am hospitalised, the Specialist side is more important to me, the private room more important for Marcela, because she says then she can stay with me! Anyway I broke one of my cardinal rules when Biking today, I rode without full protection, I won't normally go near a bike, without my protective jacket and trousers, but it was baking, and just thinking of it brought me out in a sweat, so it was helmet, boots, T-shirt and jeans, fortunately there were no incidents.

We had our meeting at 1pm, and it seemed to go well, the woman agreed with Marcela that I didn't look overweight, I now think I was lucky we left without an incident, Marcela says that at one point the woman put her hand on my arm, I don't recollect the incident, but Marcela was ready to put her lights out if she did it a second time...ha!ha! We will know the result (of my application) sometime next week.

Eating out was supposed to have been curtailed when we moved, but we have been so busy rushing here and there, we are often out at lunchtime, so yet again we had to force ourselves to go to one of our favourite haunts. As we left, Marcela received a message from the car showroom asking her to contact urgently, there had been a cock-up, and the Registering Authority had listed our car as a Public Vehicle, in other words a Taxi or something similar, so we had two options, either to apply  for a modification, which would take a few days, or go to another area and register it, but with a new number, we went for the latter, so it is now HZL---, no chance of remembering that, I just had to shout Marcela to get it right! This brought about another problem , because we had arranged insurance, under the old number, fortunately Marcela's former Colleague was able to change it.

Then it was back home, and it was still cracking the flags, we can't say the same now, it is nearly 10.30pm, hot but thunder lightening, and just started to rain, so what will it be like in the morning when again we go by bike to collect the car? I have no idea.

Marcela has shown some concern tonight at the ceiling in our bedroom, the roofs here are very basic, they put up wood pirlins, then board them with 1/4" T&G, top that with felt, and then lay the tiles on top, there is one row of boards that for some reason are bowed, it is not letting in water, that is on the other side of the room, I think they were just badly laid, and what Marcela thinks is a problem, is just the boards moving with the extreme changes in temperature (I live in hope!). 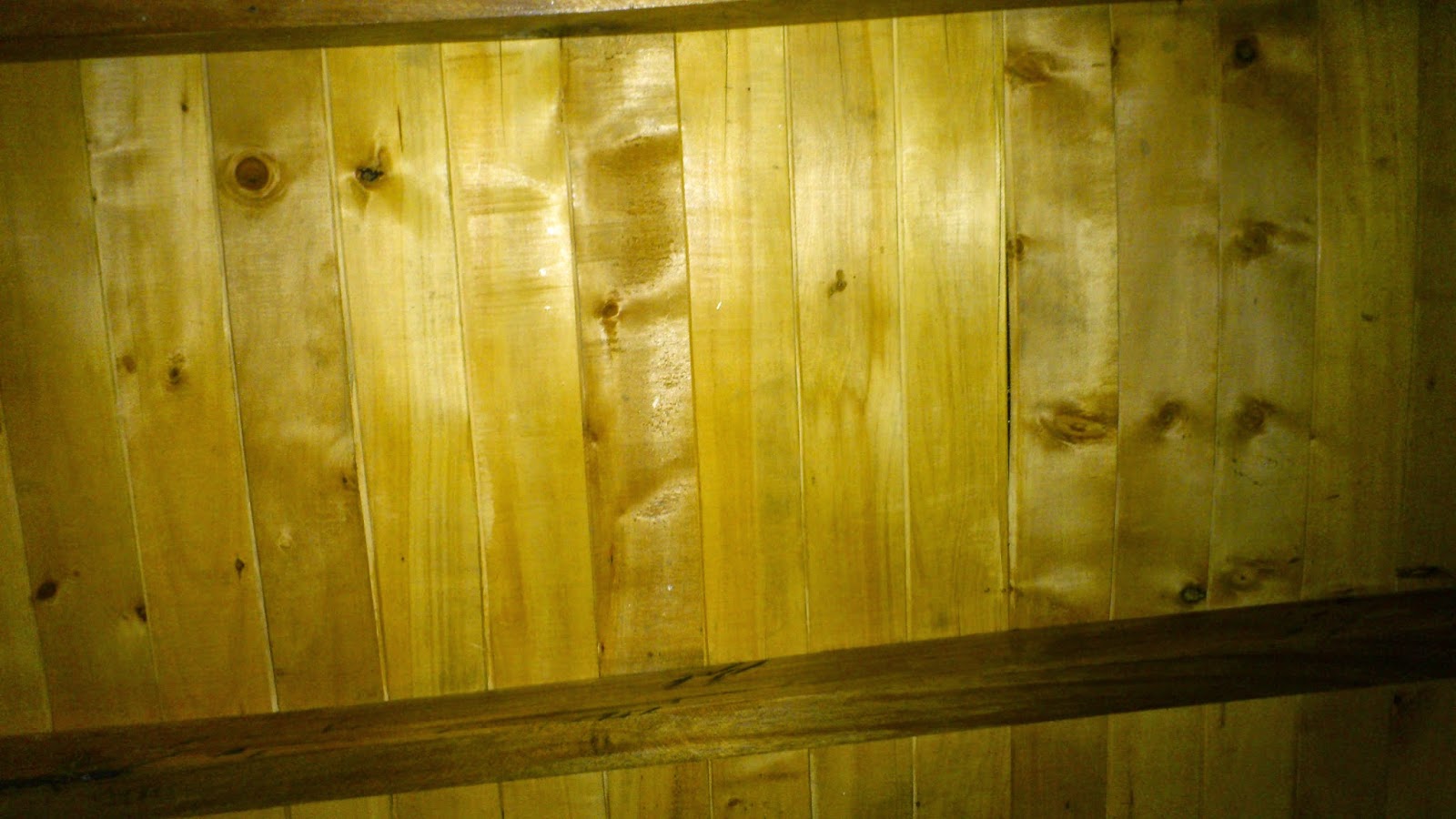 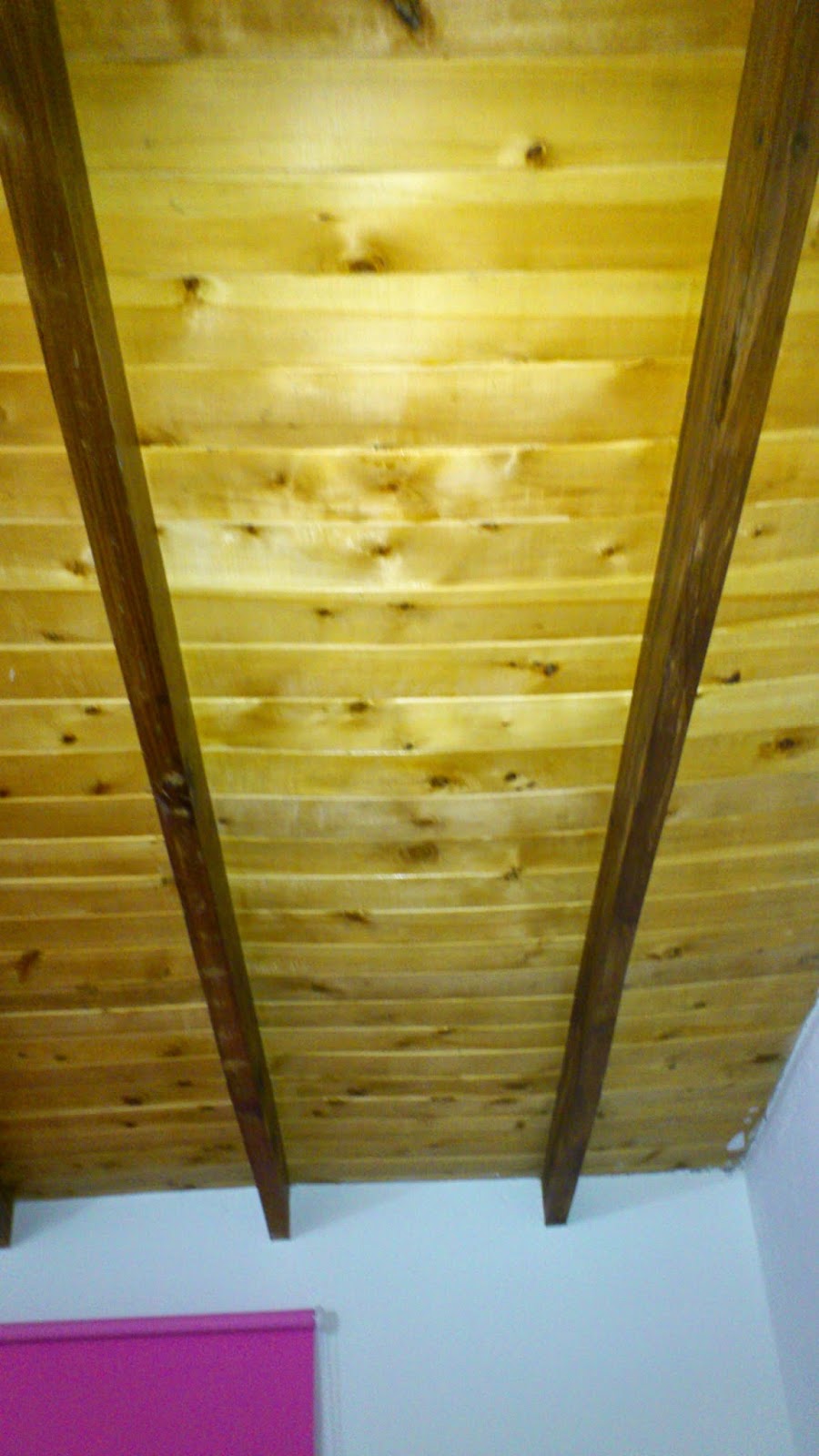 In the photo above, you can just make out where the T&G has parted, to the right of the centre of the photo.

The photo on the right, shows the bow in the T&G, why only this strip I have no idea, unless there is a join on one or other of the pirlins, in which case, maybe they were not secured that well. Whatever the reason, I hope it doesn't change, because it is in the centre of the roof, and would be an expensive job to put right.

Right, now I am off to read for a while, before we start again tomorrow!
Posted by Phil Sale at 22:49