Well, at least we finally went on the right day, we arrived at the Medical Centre at 8am for the 8.15 appointment to hear them calling my name, not correctly, as usual it was "Philip Richard", Colombians can not understand people who only have one surname, here they all take the name of their Father and Mother, and don't change them even on marriage, so because I have three Christian names and one surname, they naturally think my last forename is my first surname, if you don't follow that, don't worry, it's not important, I have been called worse!

In I went...on my own! a very pleasant Nurse, fixed me up for an ECG, it is amazing how people change, once they know you love their country, she produced a lovely smile, and we talked throughout the procedure. That done I joined Marcela in the waiting room for my blood test, again I went in alone, and immediately saw why all the Kids had been screaming their heads off, the Technician must have run out of regular syringes, and borrowed a batch from the Vet, they were huge!!!!! anyway, I just closed my eyes and let her get on with it, I hope I don't see her again any time soon, it was like being with the Butcher of Copacabana
I couldn't wait to get out of the place, they send the results direct to the Doc.

Because I hadn't been able to eat or drink anything, it was straight to the Café for a pastel de pollo and a tinto (black coffee), before doing anything else.

From there we called at the Alcaldia (Town Hall) to change Marcela's name, they had it registered incorrectly but it only took two minutes and it was done.

Then came the trailer, we were supposed to go to the workshop of the man, Umberto, Marcela had spoken with, both to have a look at his trailers, and for him to accompany him back to collect ours, however after a lot of traipsing around we eventually found him, and there was no way I was going to let him take the trailer to sell, it was in the back of beyond, in part of a car park.

After a chat, he said he might be interested in exchanging the trailer, because we had mentioned we also needed a towbar, and he fits them, so he made a provisional offer subject to inspecting our trailer, it was a very good offer, so he took us back to the car, dropped me off, and Marcela went with him.

On my arrival, Umberto was in the middle to giving the trailer a once over, and he made some valid points, so the offer was changed, but not acceptable, Marcela let me do the dealing, and we came to an arrangement that suits us all. We get a smaller trailer, a tow bar and electrics fitted, and he gets the bigger trailer and a small cash top up. Marcela then followed Umberto and our trailer back to Copacabana to measure up for the tow bar, which he hopes to have for Saturday. While she was at his yard, a customer went over and said that our trailer was just what he was looking for, Marcela rang me to ask what she should do, I said I had made a deal with Umberto and shaken on it, so she wasn't to lose the sale. Anyway on her return she said that Umberto doesn't think he'll buy it, but if he does, everyone is happy.

Whilst Marcela was away, I decided not to wait for her help, and to try and fit the septic tank covers, using the sack truck, I took them one by one and got them in position, one that has to go under the BBQ needed the corner cutting off, which I did after Marcela's return, so now they are in position, and just need levelling. 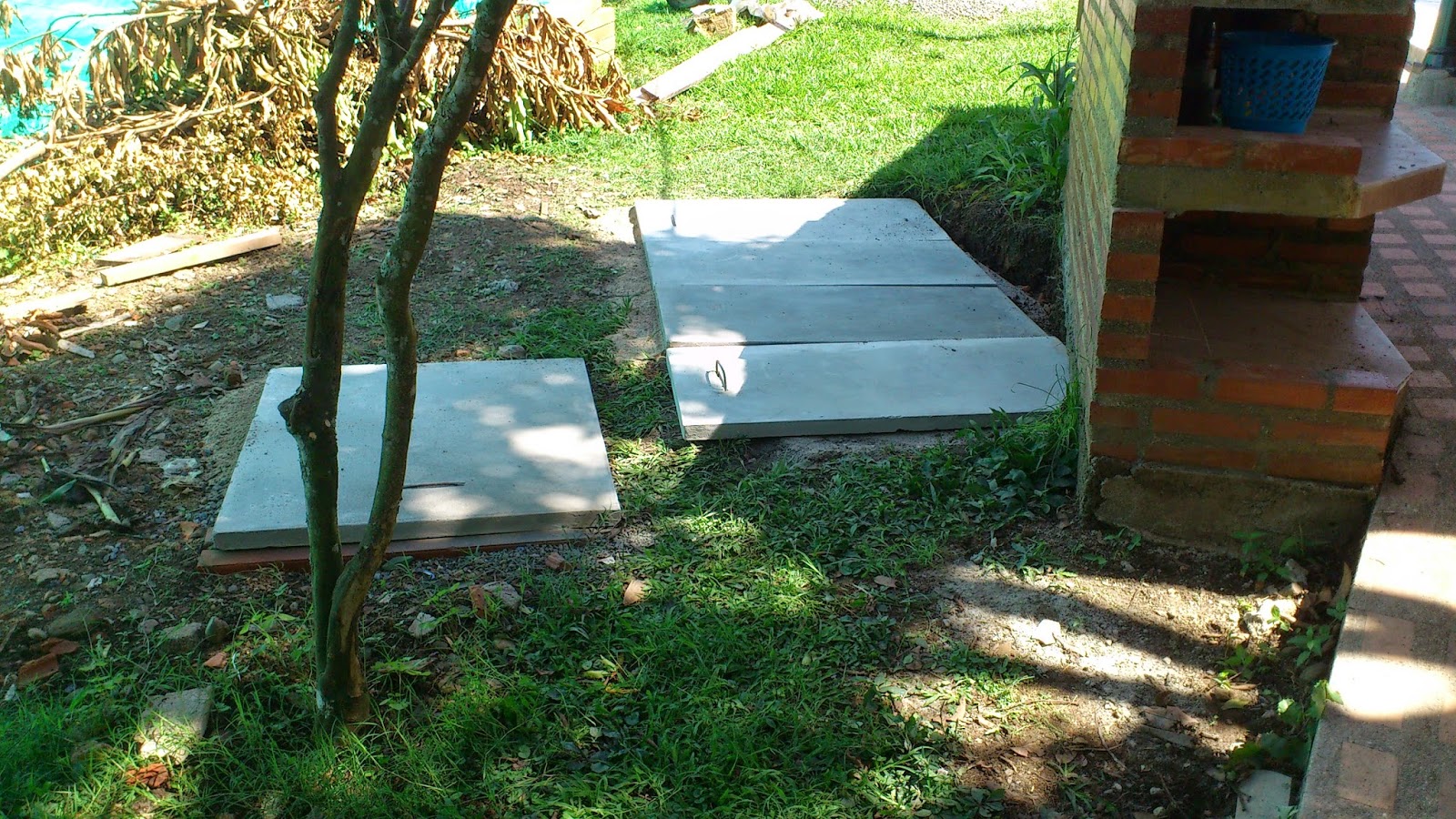 They certainly aren't pretty, but with some gravel around them, and pots with flowers on top, they shouldn't look too bad. We are certainly going to have to get the tank emptied, with everything removed, I saw what was down there, and you can tell the house was rented out previously, enough said!

That done, I cut up some of the branches from the trees I had previously cut down, they are ready to use on the sancocho fire, once they have dried out. I used a  japanese saw, I had recently bought from the U.S. which cuts on the pull stroke not the push, and it was so fast!

Marcela then came out, and we started gardening, digging, and digging deep to dig out the platano roots from the suckers that were growing, doing this I realised that the Platano was going to cause us some problems, so reluctantly, I asked Marcela if she  wanted me to take out my previously precious platano, that brought a smile,  and we kept digging until most of the roots had been found. Then my back told me that I had done enough for one day, so in I came for a shower. Marcela continued de stoning the ground, and has only just packed up.