Yesterday, I must have had my energy pill, after walking Pépe, after doing the watering, I decided as Marcela was out for the morning, and had said she would prepare lunch on her return, I would do my bit, so first order of the day was to make a Shepherds Pie, and I was looking forward to this, because we have some Bisto gravy powder, we brought a box back from the UK with us, (As well as Bird's instant custard powder!), Marcela has become partial to gravy, and I wanted to make this before we run out!

Then it was out into the garden, firstly out came the brushcutter and I trimmed the weeds/grass, to make the area look more like a lawn, I have given it a good dose of fertilizer, hopefully it will green up and start to look like a lawn, even if most of it is weeds!

Still no sign of Marcela, so I decided that I would install the treated timber I had bought to edge the borders, while I was doing this her Ladyship appeared. By this time it was getting hot, and the job wasn't helped by a certain little friend who thought he would help, by jumping all over me, and sending my pot of nails flying, the trouble is, you just can't get angry with him.

Finally after Marcela had gone, I finished the woodwork, and tidied up, although I say it myself, I am pleased with the outcome. 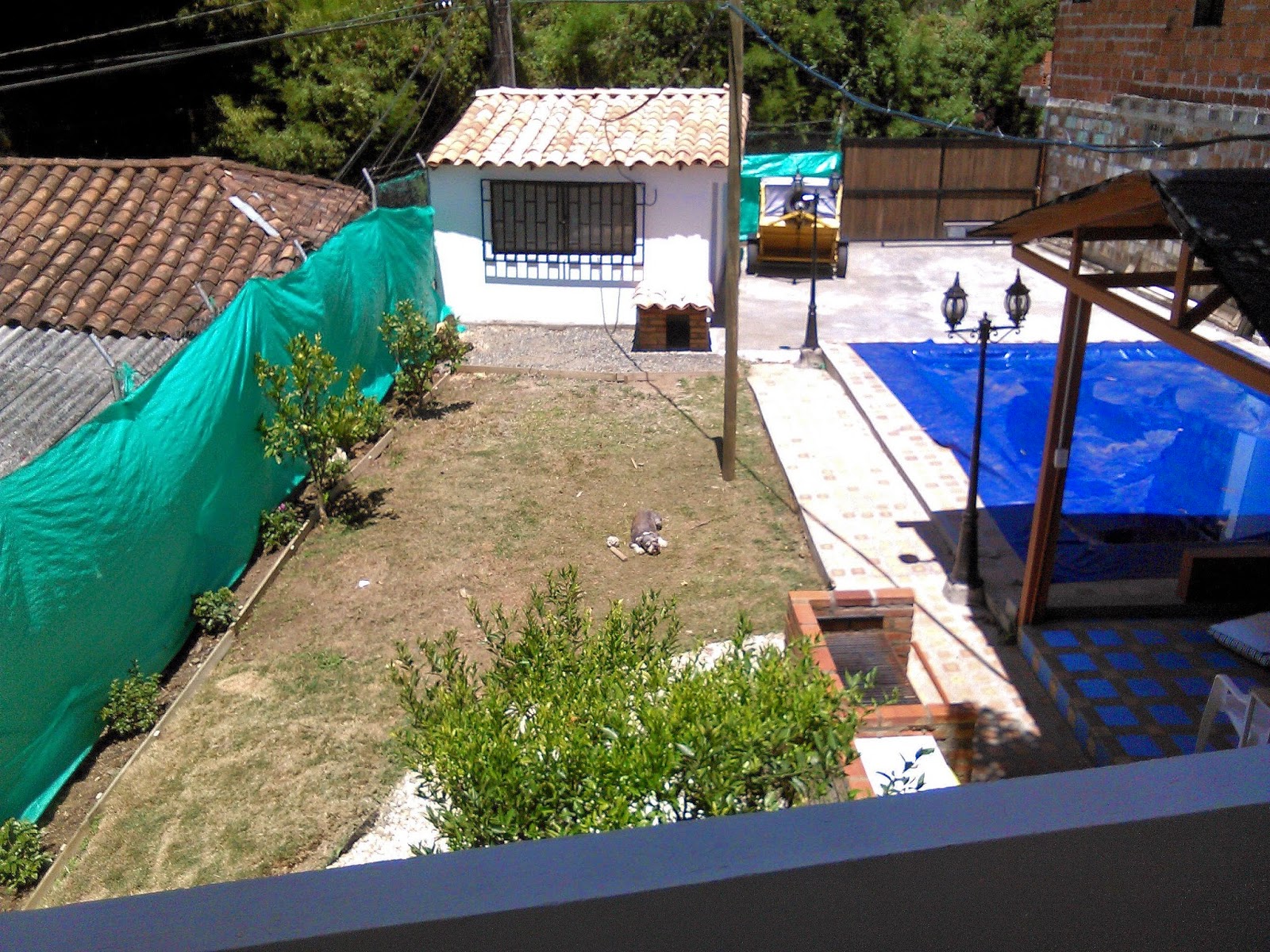 After I had finished and showered, I had a visitor, from an elderly Gent, who said he was a neighbour, albeit, I had never seen him before, he stated that he wanted to talk with me first, because he is having a problem with the communal black water pipe, which takes the waste water down to the river, apparently it is leaking somewhere near to him, and he has a problem, both with rats and mosquitos, which isn't doing either him or his wife any good. I thought this problem had been resolved, obviously not. I told him that if all those who use the pipe were prepared to contribute, I would pay my share, however just because I am a Gringo, he wasn't to expect that I was going to pay more than my share. He informed me that he was going to call in the Health Dept. to do an inspection, and ask for their advise, to his surprise I told him that we had recently had a full inspection of our septic tank etc and passed, which I think is more than any of the neighbours have had done. Anyway Señor Lopez, then started speaking in fluent American ( they don't speak English despite what they may say!) it turned out that in his younger days he went to school in the States. He gave us an open invitation to go down and see his problem.

Marcela returned and I told her about my visitor, so late afternoon, we went to visit, unfortunately, Sr.Lopez did not live where I thought he did, and it took a few enquiries to find out, but then as we shouted from his gate, we received no reply, in the end we gave up.

This morning I decided that the turf out on the road banking, had knitted sufficiently, for me to remove the security tape and metal rebar. 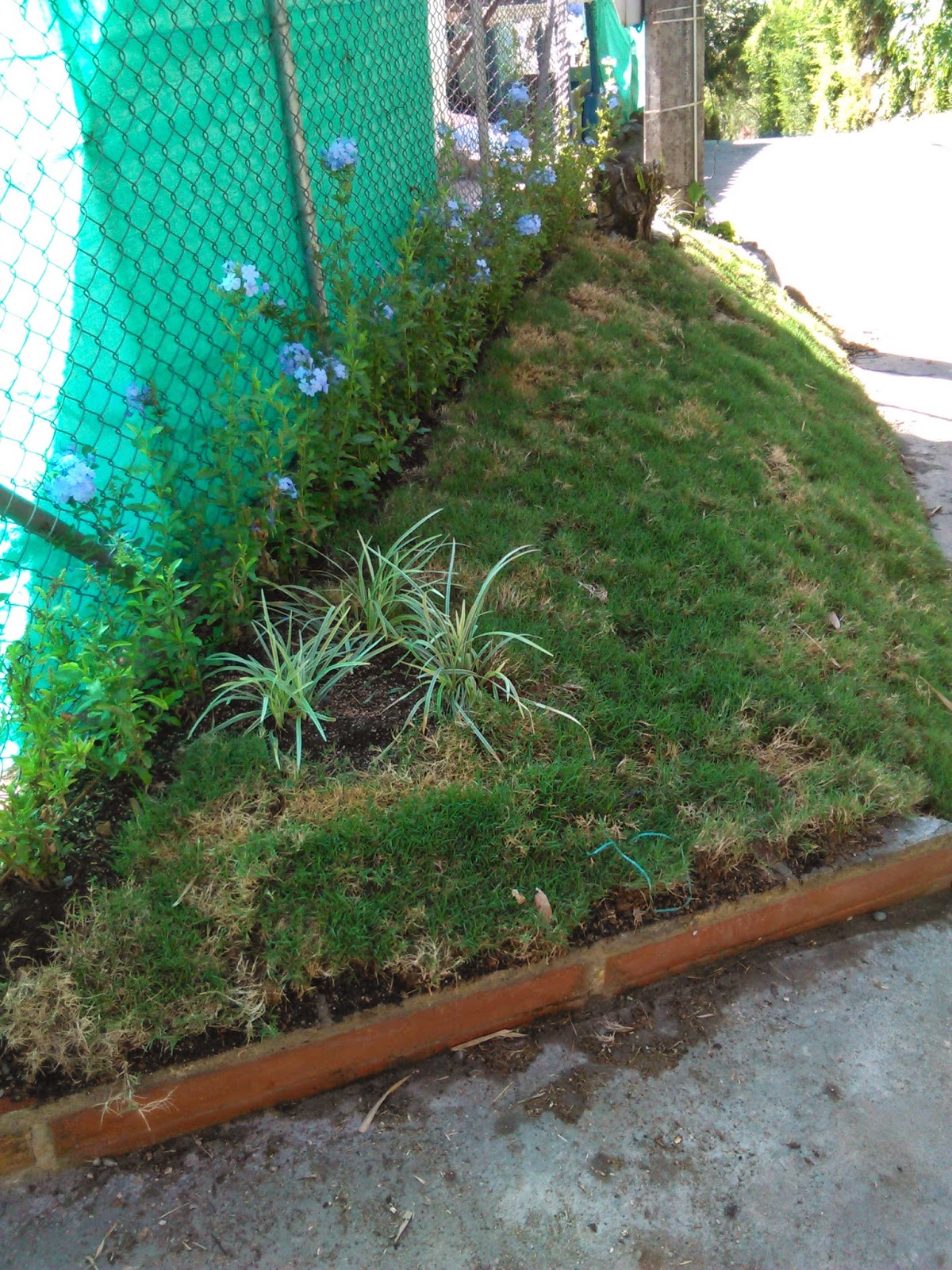 The problem I forsee is kids climbing the bank to chat with Pépe through the fence, hopefully the removal wont be seen as an open invitation, we shall just have to wait and see.

After lunch, it will be time to take Pépe to the peluquería for a 'shampoo and set' ha!ha! he is getting a bit whiffy, and suffering from the heat, so hopefully we will all benefit from his appointment. It will also give me an excuse for a super macedonia!

So much for a sweet smelling little dog! We arrived in Copacabana about twenty minutes early, upon getting Pépe out of the car, Pépe was immediately molested by a rather large Golden Labrador, that would not take no for an answer, it followed us all the way to the Vets, and inside, where we were asked if it was our dog! bloody cheek, and when the woman tried to shoo it off, it took no notice, so she got a sprayer and tried spraying it with water, at which it started to turn nasty, so she beat a hasty retreat behind her screen leaving us to its mercy.

Marcela then explained we were early for the Peluquaría appointment, at which there was a lot of mumbling, and the woman who 'Does' came out and said our appointment was for 2pm tomorrow, well I knew that was not the case I had heard Marcela book it, and say it would fit in with an appointment she had at the Town Hall, it turned out the woman had written it down on a bit of paper, and mislaid it as she transferred it into her diary... 2pm tomorrow then?  GET STUFFED!!! I wouldn't trust my dog to her, if she can't even get the details right,(never use 'ESPECIES' Vets and Peluquaría in Copacabana town)  and I walked off, for us to be immediately accosted by the Labrador again, it followed us back to the car.

Whilst I was putting Pépe back in the car, Marcela was talking to the Parking Attendant, who told us where there was another Doggy Peluquaría, I then went to take Pépe home, whilst Marcela had her appointment, and was chased all the way out of town by the Labrador, I fully expected to find it on our doorstep when I got back! People were shouting at me as I drove through town, thinking that the dog was mine, and I had left it, it didn't stop until I approached the motorway slip road, it certainly had spirit.

After taking Pépe home, and making sure he was OK, I returned to Copacabana, met up with Marcela, and we found the other Peluquaría, they were lovely, but they are not combined with a Vet, however, after we explained what had happened they told us where there was a local Vet with an excellent reputation. We later rang them back, and booked Pépe in for Friday morning. Second time Lucky!

From there it was time for a Super Macedonia, I think we had earned it, then back home.