From there we went for breakfast in our usual haunt, because we were not returning home, we were off on another Garden Centre hunt, but this time Marcela was confident she knew where we were going...

When we arrived at the location given there was no garden centre,  as we had just driven onto a toll road, I asked Marcela to recontact the garden centre for directions, they hadn't a clue where they were, and Marcela was getting more and more confused, and was put onto the Boss, who said we had been sent up the wrong road, we would have to turn back, pay to go in the other direction, take the next left onto another toll road, pay again, and again when we left... GET STUFFED!  I wasn't paying nearly 40,000 pesos before I had even bought a plant.

So we continued, and called at a garden centre we had seen the other day, they had some great quality plants, but not the quantity we needed, so they gave us directions to their other branch in Llanogrande, on the way we passed some very palatial Fincas, obviously loads of money, they even had their own Police Sub-station, and there were armed Police and Army on almost every corner, no Burglars there then, has no one informed them, I have moved to Copacabana, I haven't seen a Policeman yet... more on that later.

We arrived at 'Vivero de Eden', they were helpfulness itself, and we ended up buying twenty Azulinas, or as we better know them, Plumbago, these are for along the outside of our fence, where the raised garden used to be, hopefully these will give us some privacy, at the same time some colour. We also bought a dark red leafed ground cover plant with  bright red flowers for behind the Kiosko, I don't know their name, but hopefully they will take off. When the man was loading the car for us, he let on that he had added four extras of each, and they were not expensive to start with, we will definitely be calling there again.

By this time, it was getting on, and we hadn't even thought of lunch, so we headed back and stoped at Mi Gallo Tuerto at the bottom of the road, had a quick lunch, and returned home, got changed, and work started, I got going on the Azulinas, outside the fence, and Marcela the others behind the kiosko.

The Azulinas are in bloom, apparently because of the climate, other than dead heading they will always be in bloom, this leads to the problem that plants in bloom get stolen, so thinking cap on, I planted all the shrubs, then laid rebar behind them, and wired the plants loosely to the rebar, then the rebar to the fence, hopefully that will suffice, but would I be surprised if all the plants, rebar and all went...No! The people around here are worse than Scousers, if it isn't nailed down, forget it, it's gone. 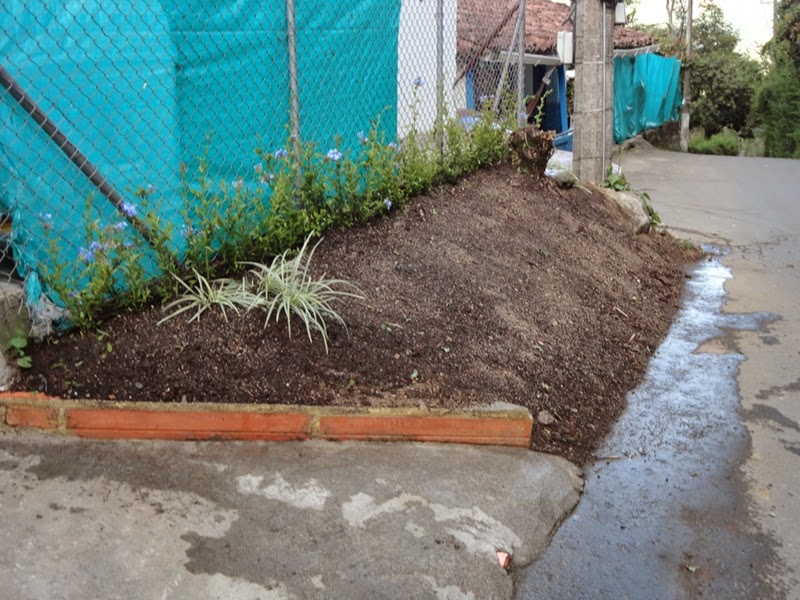 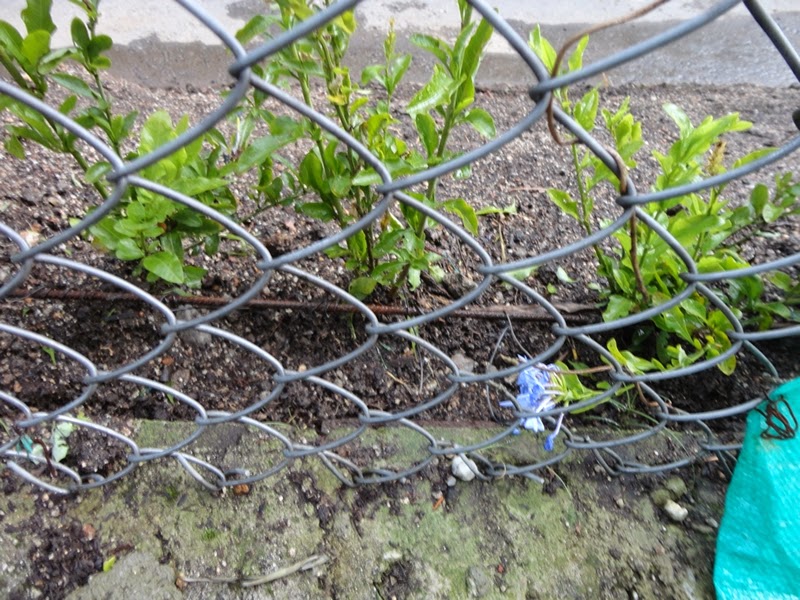 In the mean time, Marcela has been working hard planting her shrubs, but it has been a little more hard going, because the gardening she has done on this patch previously was obviously surface only, because she has found it full of stone and rubble...oh dear he!he!
But give her due, she has been persistent and got there in the end, albeit it is now dark and 7.30pm.

Going back to the subject of Police, while I was planting out in the road, an INPEC  bus came up passed, this is the Department that runs the Prison Service, for some reason it got those passing at the time very agitated, why should this bus be going up a road that leads to nowhere? unless they were going to collect Prisoners who have been working for either a Politician, or a Prison Boss, with a big estate further up the mountain, which is entirely possible, I have no idea who lives up beyond us, but there are some big with a capital 'B' properties worth a fortune up there, much like Llanogrande without the official protection.