Not a brilliant start, Pépe woke me at 3.45am wanting to go out, so I left the door open and crawled back into bed, I saw 4.30am tick around, then nothing until 5.30, when Pépe was pawing at me again!

We had to be at the Dentists by 8 o'clock this morning, I seemed to be with her for ages, whilst she filed and fine tuned my dentures, I was a little disappointed, because the 'practise' ones last week, had been a perfect fit, and comfortable, but as she explained they would never have lasted, they were purely to see the teeth in situ. I think it will be a day or two, before I am used to them, they are not uncomfortable, they just feel odd, but it is nice to have a full set of teeth again! 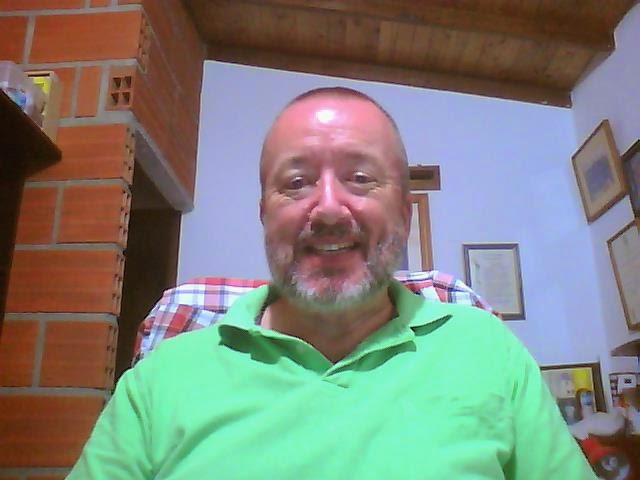 From there we went to the stone merchant, and ordered 30 bags of chippings, he gave us discount which more than covered the transport costs, and we went off for breakfast at Mi Gallo Tuerto...I know, yet again, well, I had to introduce Marcela to the menu! also there was a cash point there, so I withdrew the money, and went back to pay for the chippings, by which time they had loaded up the pickup, and they followed us home, I have to say, I am glad I didn't try it with the trailer, not in one trip anyway, a couple of times, they had to stop for other vehicles, and couldn't get traction to get going again, having to reverse down to the flat and take a run at it.

Marcela and I then spent the day gardening, she worked on clearing old bushes and weeds, then on the rear of the kiosko, I prepared another part of the garden, and laid the remainder of the turf, I had kept it well watered, so it was fine, but it is nothing like the grass we already have, so even if it takes, it is going to be like a patchwork quilt...Oh well, at least it's green!

We had a call from the balustrade man, to ask if he could come at 4.30pm instead of tomorrow, which suited us, he eventually turned up an hour or so late, but gave us a quote to 'fence' off the pool, that was less than I expected, although cheaper would have been nice. I have to pay 50% next week, and it will be about a month before the job is done, I will be a lot happier when it is complete, the only downside is that they are fabricated out of ordinary grey cement, so there will be a lot of painting, Marcela has said she will muck in with this, so hopefully a couple of coats should see it done. I just need to get the Kiosk roof done first.

I had a look at the alarm instructions this afternoon, not quite, 'Out of the Box' as I thought, due to my early morning, I was falling asleep reading, so it may be a day or two before I get round to that.

Tomorrow we are having an easy day, we will have to go food shopping at some stage,  so I am going to call at the DIY store and price a cheap chainsaw, because the mango trees are driving us potty, and are going to have more than a haircut this time.
By Phil Sale at July 19, 2014