What a couple of days!

Yesterday, we took the car for it's first service at 9am, only to be told it wouldn't be ready until 3pm...six hours for a service!!!!!! it turns out they have lunch from 12-2pm, had we changed the day and gone for 8am, it would have been ready for midday.

Off we went, we visited Hernan, Marcela's Uncle, at his workshop, and then went for breakfast.What... no pastel de carne y huevo, the day was ruined, maybe an exaggeration, that was to come later.

I think we then went in every store we came across, just to pass time, even lunch didn't stretch to fill in much time, in the end we returned at 2.10pm, and it was a good job we did, he hadn't even started the Service, apparently the Garage Boss kept dragging him off to do other things, and as he is the only Mechanic, that set things back. The car was eventually ready at 4pm, and we made our way home, but due to a couple of accidents that took some time.

This morning, I set off with the trailer at 7.45am, to go to Homecenter in San Juan, we were going to go to a Garden Centre out at Llanogrande, but had seen better quality Bougainvilleas and cheaper in the store garden centre. I also wanted the chainsaw, and some lumber to line the flower borders for Marcela. Traffic was horrendous, both due to roadworks and accidents, but I got there in the end, and firstly went for the shrubs and chainsaw, those bought and loaded up, I then went to the Builders side, where I bought the remainder of my shopping list, again loaded up, and set off for home.  I stopped at a little garden centre on route, because a week or so ago, we had been there, and they had one of my favourite Shrubs, in  Spain we called it Dame de la Noche, here they call it Galan de la Noche, it is nothing much to look at, green leaves,  with the same coloured flowers, but the scent on a warm evening is something else, I love it, so I bought one.

I was making good time, until I was 300m from home, when everything came to a halt, literally, I wasn't sure what the problem was at first, being a Gringo, I was being ignored, but eventually, I found out that a lorry delivering to a building site, further up the mountain, had run out of diesel, and was completely blocking the road.

It was amusing at first, all the men gathered around giving advice, the Driver's Mate, got hold of a container, and headed off down towards the motorway to get a couple of gallons, eventually he returned 3/4 of an hour later, they siphoned it into the tank, and then flattened the battery, trying to start it, I think they thought turning it over like a petrol engine would do the trick, they didn't realise they would have to bleed the system. They then took the battery from the local bus, I cringed, I could see we were going to have a line of dead batteries, fortunately they gave up, and called a mechanic, but not local, from their Company, the other side of Medellin.

I had sat back in the car, by which time over two hours had passed, Marcela had been down with a bottle of cold pop for me, however I suddenly realised all the locals had gone, so decided I to, would walk home.

On my way, I started to hear popping like fire crackers, as I rounded the bend, I saw two school kids, sit in the road, laughing, they had started a fire in the bamboo hedge lining the road. I made my way home fast, as the wind was fanning the fire, and it was heading uphill. I shouted Marcela, but their was no point ringing the Fire Brigade / Bomberos, they couldn't get near, for the broken down lorry and the queue of traffic behind it.

The Estate Caretaker, came running out, and was going to call the Bomberos, until I told him about the lorry, he then ran back and came out with a very long hose, but had no access to water, I helped uncoil the hose down to the scene, and Marcela, got our hose, which was fed into the long one,  but the pressure was rubbish. I left Marcela helping out, and jogged (I don't run!) back to the lorry, and asked how long they would be, the Mechanic was on scene, but no sign of much being done, until I told them about the fire, as which panic set in, because if access is blocked for the Bomberos, or Police, there is hell to pay.

Quarter of an hour later I heard that the fire had been put out, five minutes after that, they lorry fired up, and I made it home, about three hours after stopping, I was not impressed.

However, that just meant, my working day was starting late, so after unloading the trailer, I laid the remainder of the weed suppressant material, and then finished spreading the chippings, there is still a lot of work to do, but what a difference: 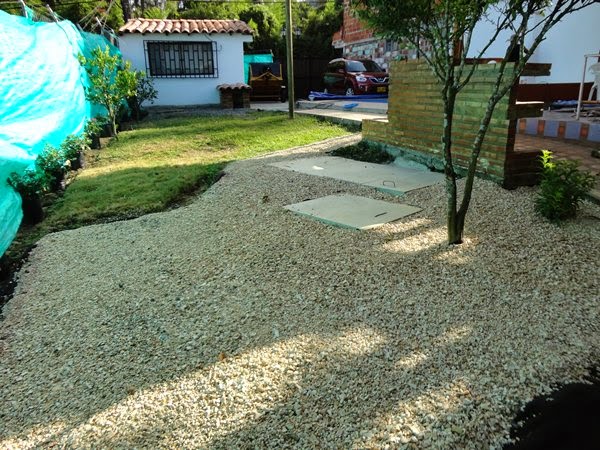 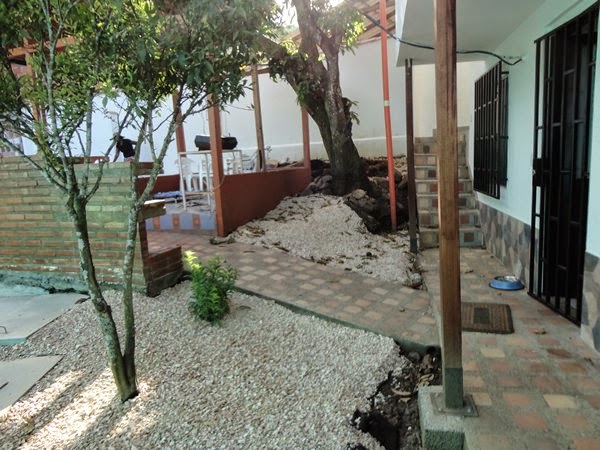 And there is my Galan de la Noche set in the gravel, next to the BBQ.

The top picture shows the Bougainvilleas lined up on the left, waiting to be planted, Which they  now have been, but not without incident. I will be glad when they Bougainvilleas have grown enough to give us privacy, then the green privacy screening can come down.

As I said, this was completed, but not without incident,  the green material is attached to a mesh security fence, other other side of which is an seven foot drop to a track below, I was working close to the fence, because I didn't want to get soil on the new chippings, when suddenly the ground gave from under me, and down I went, to be honest I thought I was going under the fence, and there was little I could do about it, because as I went down, I did the splits, and my hands were positioned in such a way, that if I moved them, I was going to split my kipper! Marcela who was cleaning the pool, dropped everything, and ran over, then ran off like a headless chicken, if anyone had been filming, they would have made a few, bob, I am sure it looked funny. I realised that Marcela wasn't sure whether to grab me, or run round and down the track, to stop me falling. Fortunately I was able to stop her, and she got behind me, and supported the leg that had disappeared, whilst I hauled myself back, and had a breather! We both needed one, it was a bit hairy to say the least.

I then continued planting, as I did so, I realised that my new piece of turf, which was a left over from the banking outside, had attracted some attention. 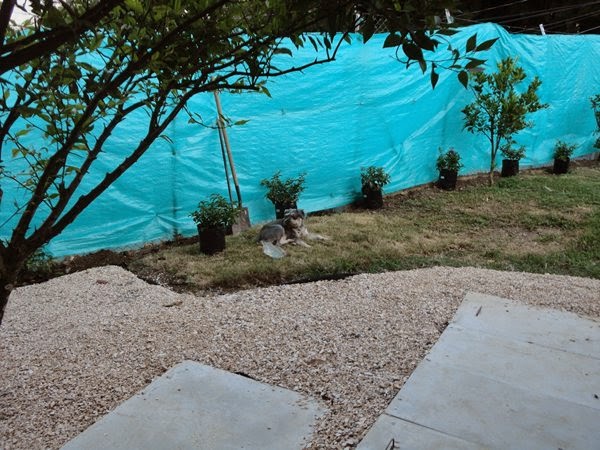 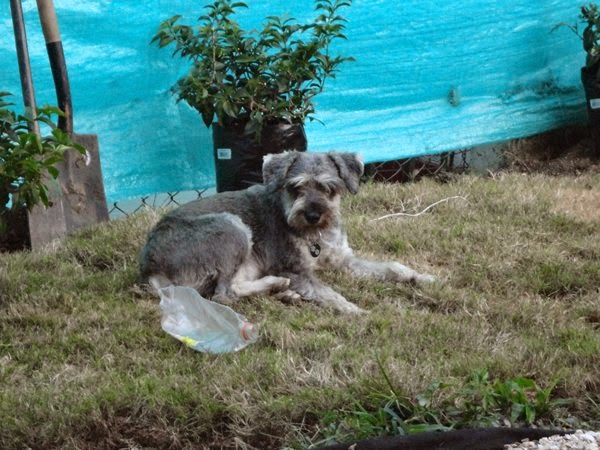 I think Pépe thought it was nice and soft, and would make a lovely personal cushioned area, there was no way he was moving, he loved it, he wasn't doing any harm, so it looks as if that is now his spot!

By the time I had finished planting, it was getting dusk, and I still had the watering to do, so back to work!

Tomorrow, we have to be down in Copacabana for 9am, for Marcela to try out a new Nail parlor, no one does their own nails here, if she didn't try one here, it meant travelling back to Bello every other week, which with toll charges, made it a dear do!!

So now it is time to unwind, and for Firewoman Marcela to shower, so I don't have to call her 'Sooty' ha!ha!
Posted by Phil Sale at 21:40