Fortunately the weather picked up yesterday, we were joined by the mother in law, Maria Elena, the sister in law, Sandra, and nephew, Sebastian, not forgetting their dog, 'Princesa'.

Pépe had a great day with Princesa, they never left each other alone, she certainly made herself at home, and was as good as gold, it was my first encounter with her, and although at first a bit timid, she soon discovered who supplied the treats!

We made good use of the pool, in between time, Maria Elena prepared a sancocho for lunch (details on food and drink page) I got the fire going, the one problem with sancocho, is that it seems to take for ever to cook, and my wood pile was rapidly depleting!

Sebastian has come on leaps and bounds with his swimming, to think two years ago he was very timid near water, he has been having lessons, and for a six year old he can now swim well, confidently, and also under water, so we had a competition, I threw coins in the shallow end, and he duck-dived to retrieve them, and got them all.

True to form late afternoon the clouds rolled in, and it started raining, I was on BBQ duty, Marcela had made some lovely beef burgers, she offered to cook them indoors, but I was having none of that, and managed to get them cooked between showers, after which, I went for a shower, and shortly afterwards, I left the girls to natter, and went up to read.

Today was different altogether, I don't think I was that popular first thing, I went downstairs, and had to go in, to get my walking shoes, as well as Pépe's lead and my stick, Princesa is a good guard dog, she heard the door, from in their bedroom, and barked like crazy, waking everyone up, and yes, it was my usual time of 5.30am!

The sun was cracking the flags from early on, so I decided that work had to be the order of the day. I drilled the concrete in the 'zona de ropa' for the bolts to hold down the fence post bases, the concrete mix was certainly a good one, it took ages to drill the twenty four holes needed, but it got done, and I managed to get the bases attached and the posts in.

I then took a break, because Sebastian had been pestering me to go in the pool, or rather to throw more money in for him, so I moved the goalposts a tad, and told him that I would also be in the pool diving for the money, if I got it, it was mine... you should have seen his face ha!ha! but he was as good as gold, and said nothing. I gave the money to Marcela, and went in the pool, it was freezing, but only because it was so hot out, and once in it was lovely and refreshing.

Marcela, threw the first coin, I went down and got it, but when Sebastian surfaced, I made out I couldn't find it, and down again he went, as did the coin, and up he came with a big grin, clutching the coin, as he did with the other three, but he was as happy as larry, and I was able to get out, and carry on work, suitably refreshed.

Before and after lunch, I was cutting and fitting the rails to the fence, by late afternoon it was finished, but my back was killing me.

As you can see here, I have been able to remove about 6m of the green material, I am glad to see it go, unfortunately the rest can't be taken down until the bougainvilleas have grown. 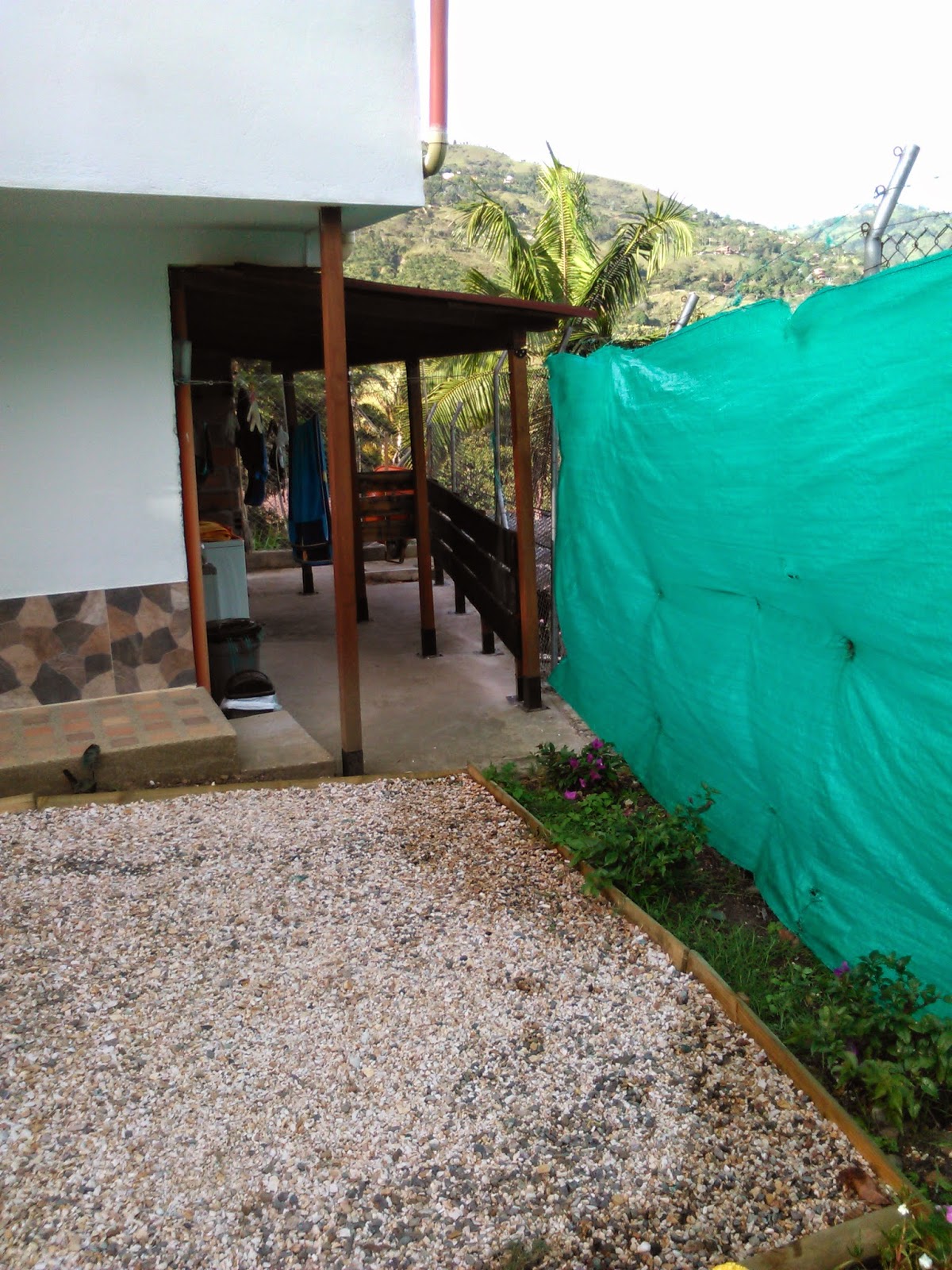 The reason for the fencing, is that behind the green material is only a mesh, and we would have no privacy,
by putting up the fencing, people walking past, at a lower level, and those who live in the Fincas below and beyond us, only have a limited view, and it offers us a degree of privacy, without making it seem like a prison, as you can see in the next photo. 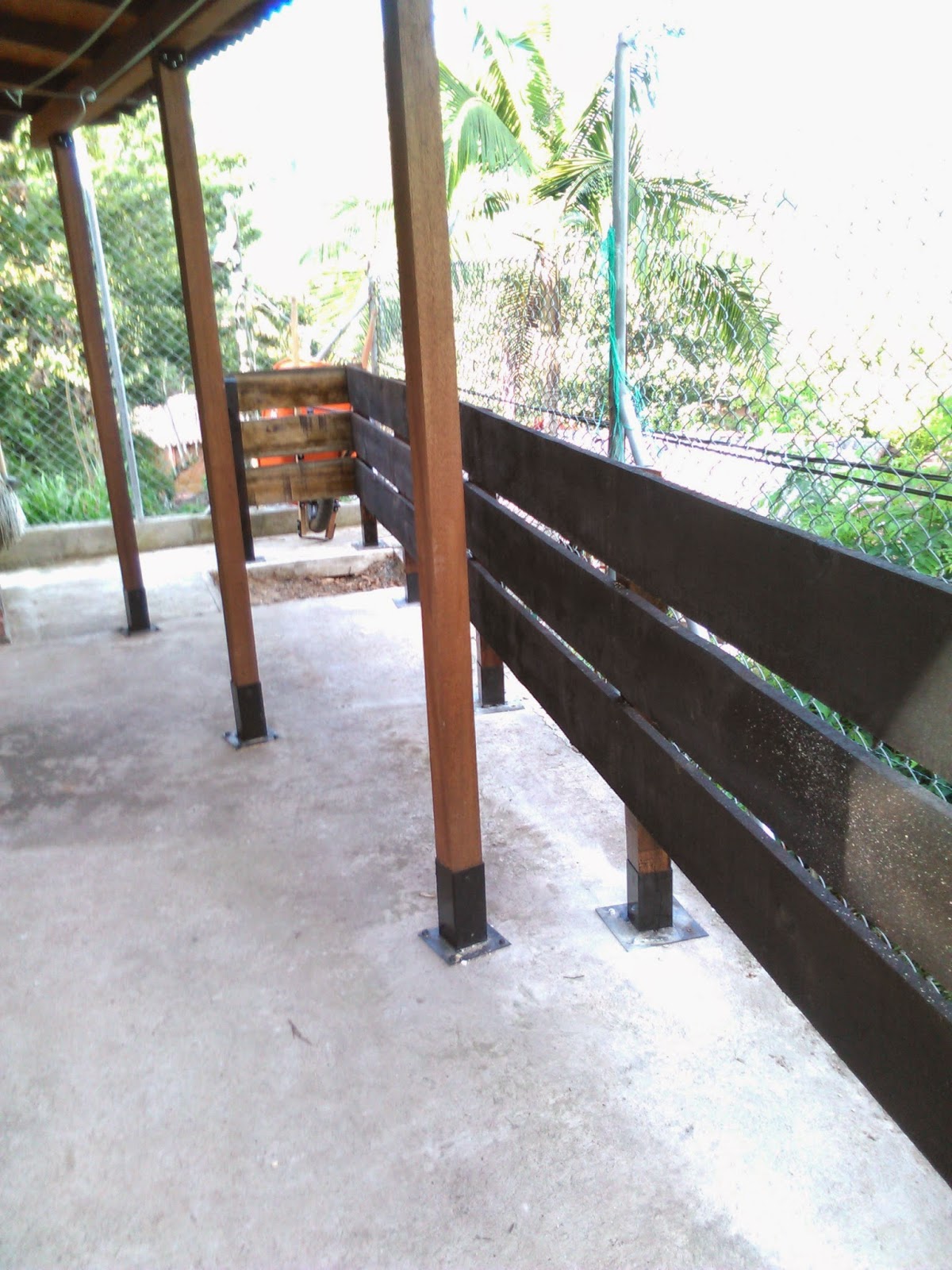 It also now gives us a view across the mountains, both from the 'zona de ropa' ( washing lines and washing machine), but also from the kitchen window, where before all we could see was green!

As I finished, Marcela left to take the family home, Pépe was quite upset at losing his playmate.

I tidied up, then did a few jobs about the house, before Marcela returned with a Pizza for tea.

That is another day, crossed off the calendar!
By Phil Sale at August 24, 2014