Before I forget, I will just wish my Brother David a very Happy Birthday, I did phone but he was at work, it will now be over, due to the six hour time difference, but the thought was there.

Tuesday, I went for my early medical test, we left on time, but it took longer than usual because there was a serious accident (another one...!) on the Autopista, a motorcylist trapped under a lorry, it has got to the stage that I worry if I do not see less than two or three accidents a day, the standard of driving here is so bad.

You are driving along, and a driver to your right (bear in mind we drive on the right here) wriggles his/her hand out of the window, what are you supposed to think, maybe he/she had a bogey stuck on the end of his finger, or an insect had just bitten him/her, no they are indicating that they intend to pull in front of you, whether you like it or not, they haven't a clue that the vehicle has built in indicators, I think many vehicles here, end their days at the scrap yard, without the indicators ever having been used.

As for lane discipline, what's that? bear in mind that the Autopistas (motorways) here are the equivalent of Dual carriageways in Europe, there are no restrictions on types of vehicle, there can't be, because most are the only way of getting about town, they go through them, traffic lights every few hundred yards, sleeping policemen put in the most obscure places to catch you unawares. People don't think that when there are three lanes, there is a reason for that, it is a case, of which lane, shall I drive or pedal in today, well... I was in the right hand lane (we would call the slow lane) yesterday, I think I'll try the left one today and the middle one tomorrow! Motorcyclists are a law unto themselves, there are many responsible motorcyclists, but unfortunately there are many more who are not, a three lane motorway, can easily become a six lane, three being motorcyclists, I have no objection to motorcyclists weaving through queues of slow moving traffic, I do it myself, but when they do it as a matter of course, and hoot and give you a dirty look if you so much as drift across your own lane at their expense, I do get frustrated to say the least.

I have found out that property law here is very different from the UK, a neighbour at the back of the family home, has turned his house into apartments, but in doing so, he has created two new kitchens against the Mother in Law's bedrooms, one upstairs and one down, as she has to leave for work in the middle of the night she goes to bed early, but can't sleep, because of people using the kitchens. This is illegal, you can move a room about, as long as it does not have contact with a neighbour's house, otherwise you have to submit plans which have to be approved by the neighbour, this hasn't been the case, and unusually the Police here deal with these matters, they have a specific department set up. So having finished in Medellin we went to the Office, and Marcela filed a complaint, having previously spoken to the neighbours, whoes only comment was, 'Why don't you sell us the house then?' as I said to Marcela, inflate the price and tell them to buy it! As a result they are sending an Inspector around in two weeks, so we then had to take the form to the neighbour, so they will be in.

From there, we went to pick up the Security Camera, the cheeky buggers had only sent it back, postage to be paid by me, and it was their faulty equipment, I was not happy. Marcela has since spoken to the company, and the matter is still ongoing, but at least this one works!

It was then back to Medellin, where I bought some more paint, to do the balustrades, we had lunch, then called at the workshop to pick up the milled brass part for my table saw, before heading home.

Back home, I fitted the part to my saw, why I never thought of having a part made before I have no idea, but it is a different saw now...brilliant!

I then started painting the balustrade, it is certainly not a quick job, and not one of my favourites either, but it has to be done. 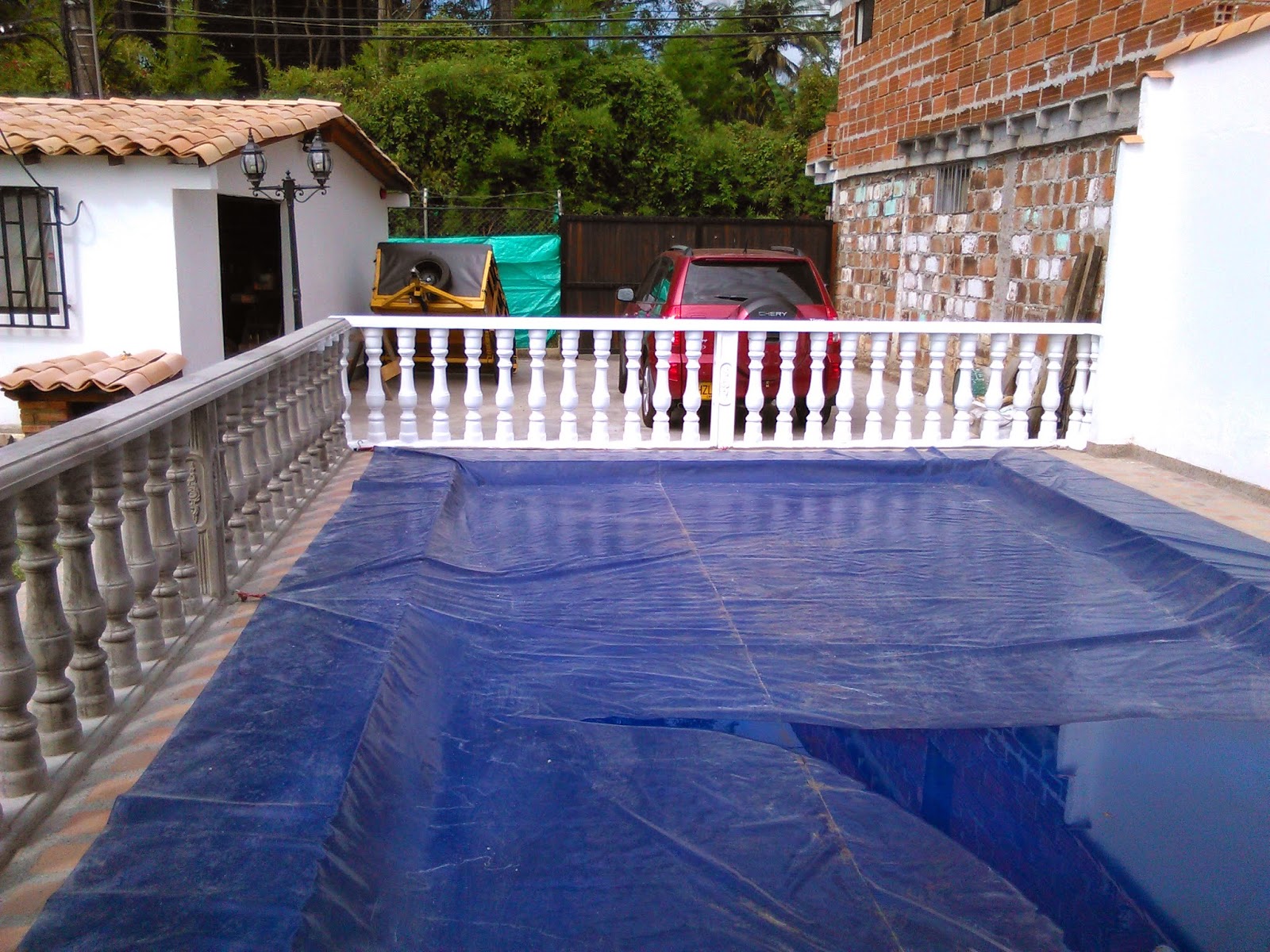 This morning, I continued painting, until Marcela showed her face. After breakfast, I did a bit more, then we hitched up the trailer, and went to buy two mattresses for the bunk-beds, they are only cheap occasional mattresses, but far more comfortable than the straw ones that came with the beds, and no one likes! The straw ones have been stored in case there is a party and extras are needed.

Back home it was scorching, if we waited for Marcela to prepare lunch it would have been mid afternoon, so instead, we jumped on the motorbike, and nipped down to Mi Gallo Tuerto for a cheapie.

Back home, the balustrade I had previously painted had moved into the shade, so Marcela who has never painted before, started on the second coat. 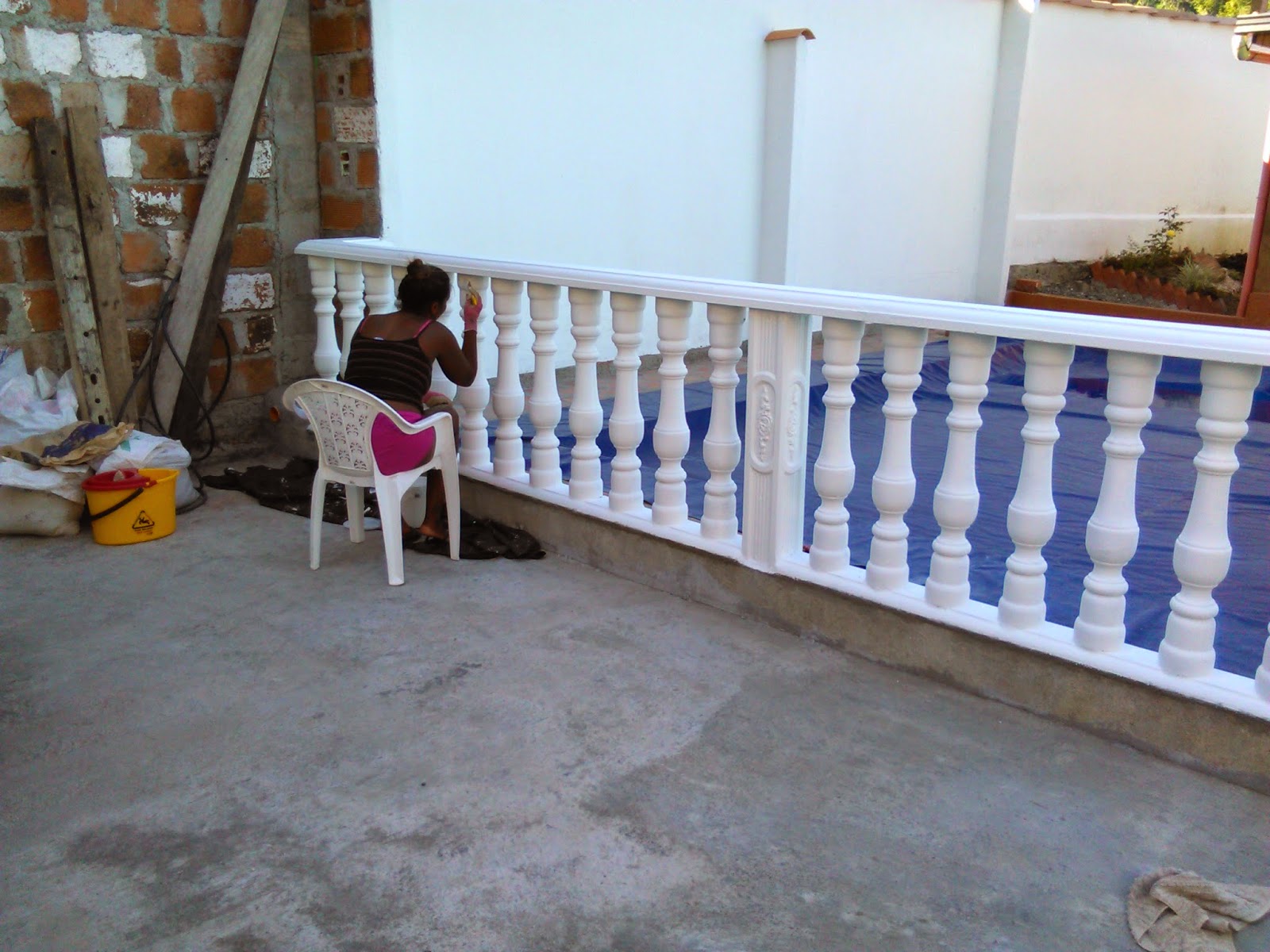 I have to say that she is doing an excellent job, although I do take the mickey about her sitting down on the job! :)

At this rate we should have it finished before the week-end, which will be nice with the family coming.

I didn't do any more painting today, I started on the fencing, and prepared all the posts, they were too big for the bases (Timber yards fault!) so I had to plane each one down until they fit into the bases, and then paint them all with 'imunizante' (wood preserver).

I then bolted the two bases to the parking area, where I intend to put fencing from the workshop across, to the start of the gate to give privacy, then that horrid green material can come down, on one side of the house at least. I have just got to fit some tracking I bought to the workshop wall, to slot the wood into, and then the fence can go up, hopefully tomorrow, in between painting sessions.