Marcela was due to go off to the City this morning, so after walking Pépe, I decided it was time for another curry, I got underway, and went upstairs to wake madam, only to find that she was feeling under the weather, and had decided she wasn't going...ummmmph! Oh well we were still going to have curry!

I spent some of this morning, paint stripping the kiosko again, I am getting there slowly, it doesn't help when Pépe wants to play.

Marcela rang the company who sold me the security camera, we would have to speak with their support, they would get them to ring back, however after putting down the phone, I found that Support was only available 2 - 8pm, so we had a wait.

I was reading the Daily Mail Online, and saw a reference to my old school, Bromsgrove School, in Worcestershire, a new Head Master is due to start after the Summer break, he has been head hunted, from New Zealand, only it appears his start is not going to be that brilliant, his ex-wife has taken out a private prosecution for Domestic Violence in 2010, not a great start for someone at a £31000pa per student school, he is contesting the case, but it's not what you want to see. Later this morning I received a letter from the Board of Governors, stating they were aware of the situation, before appointing him, and had complete confidence in him as a man, well they would say that wouldn't they, it wouldn't look good otherwise, I seem to remember David Cameron saying the same about a few of his Ministers, who then departed!

After a rather splendid curry (Yes, OK... I know, but it was tasty!) I decided to head off to Homecenter, it was nearly 2.30pm and no phone call. I went straight there and back, no ice-cream today, still no call, so Marcela rang the support line, and they were on for ages, trying different things, with little or no success, the Technician asked us to ring the Telephone Service Provider and ask them to ensure the camera was not being blocked. After putting down the phone, Marcela rang UNE the phone company, and I was messing about, don't ask me how, but I got the camera working.

The camera would pan left and right, but not up and down, so it was back onto Support, it appears that we have a mechanically duff camera, and it will have to be replaced, unfortunately that will mean us having to go through the whole set up process again, but before closing everything down, I have taken screen prints of all the settings. 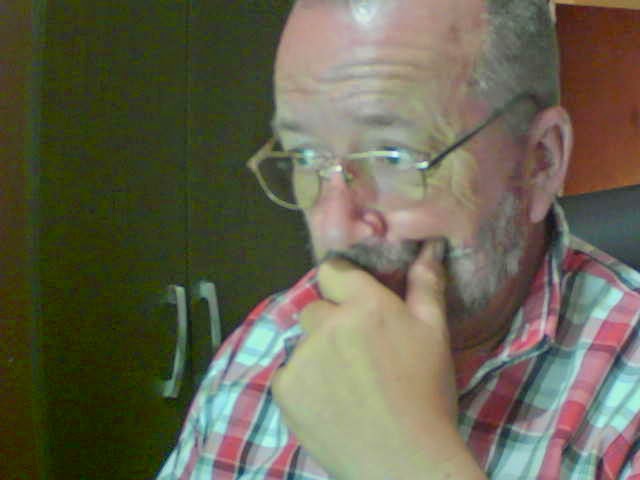 If I look a bit anxious, that is because I was, I don't like not being able to resolve a problem myself, this photo was grabbed from the security camera.

Marcela will ring the Sales Dept., in the morning to try and sort that out. However it is nice to know that it can be done, and the picture isn't that bad either.

The swimming pool has not noticeably lost any water overnight, that is a promising sign, although Marcela seems to have lost interest for now, it must be deflating, not knowing if all her hard work, and she has worked hard on it, was in vain, we have no way of knowing how this will turn out, we can only wait and see.

Tomorrow, my timber arrives for the kiosko in the afternoon, so I will be able to get started, I'm not rushing it, I want the job done correctly, and it to last beyond my time, but on the other hand, I can't have the timber lying around in the wet, and once I start to put the bits together, they will have to remain outside, I haven't got the space in the workshop, Oh to have my Spanish workshop here!!
By Phil Sale at August 11, 2014