Having had the day off yesterday, and taken the family out for the day, it was my intention to get started on some rendering today, but that went by the board, when my beloved Wife, asked me this morning to help her out.

Marcela is starting up her own business(es) online, one is a shop which is up and running, and she has had her first orders, the second and her primary business, is an Online platform to showcase work of up and coming Designers in the fashion world, this is taking longer to get going, but there is more and more interest, which is encouraging. As a result one of the local Townhalls, has asked her to take part in a Fashion Fayre, they will supply the stall, and she will use it to promote the business, in so doing, she has three Designers who are going to showcase their stock on Marcela's stand, and she said she wanted three rustic wooden stands that will hold six items on each, and a space to display the logo of each Designer.

What's the budget I asked...budget? was the reply ha!ha! I thought as much, so I went in search of my leftovers to see what I could come up with. 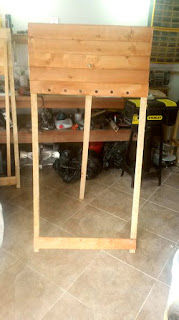 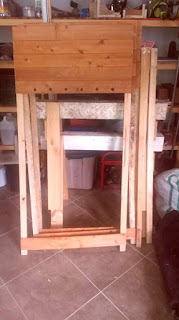 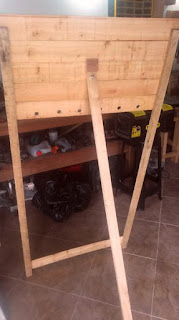 Using some construction lumber for the legs and brace, some 8mm pine planking left over from the roofing, and a bolt with wingnuts instead of hinges I came up with these. Drilling 3/4" holes along the bottom of the planking to take hangers. These should easily fit in the car the overall size being 1.5m x 0.75m.

That done, I thought I could wrap up, but I thought wrong, 'I also need two stands for mannequins'...apparently one of the designers has two dressmakers mannequins, without legs, similar to this; 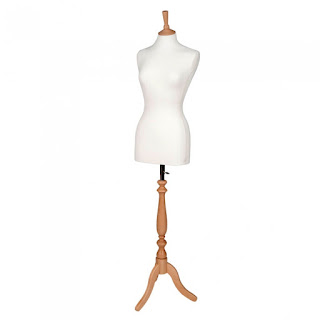 without the base, so having asked for a photo and the approximate size of the mannequins, it was back to work.


The base has to have some weight in it, and I have a lot of mahogany pieces stacked in the workshop, so out they came, four pieces at 14" each,  I then cut lap joints using the tablesaw, So I had two 'X' on which to attach a post, and fortunately I still had some 1 1/4" dowel in stock, cutting that to length, I then put a point on one end, which will be rammed up into the mannequin (I told Marcela that I would have to try this out using her as a mannequin...ummm didn't think so!), finally gluing and screwing it together, I gave the two stands a coat of black paint to match the mannequins. 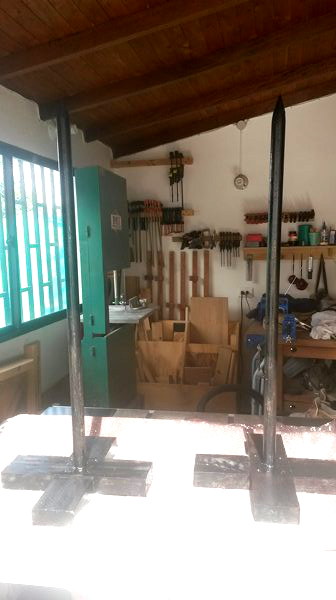 Job done, 3pm and no time for anything else today.