Yet another shortcut by the previous owner, Pedro, which is causing problems!  Because we are on a septic tank, surface drainage water is a problem, and the water from half the gazebo roof, the house roof and the pool surround, are piped underground, circumventing the septic tank, and into a pipe that goes...God knows where, it should go down to the quebrada, which in turn goes down to the river, however we have been informed that for some unknown reason one of the neighbours below us, cut the pipe, maybe to use the waste water for his land, I have no idea, and don't really care, that's his problem,

However the water from the other half of the gazebo roof falls on the land below, and the water from the border behind also runs in a concrete gully to the front of the house, into another smaller gully, through a pipe under the footpath, and was then expected to find it's own way to the lane below. 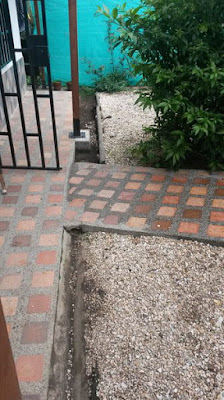 This has not been helped by the fact I had to construct concrete platforms to support the wooden columns supporting the balcony above, but the water just was not moving, as a result we started getting damp in the house. 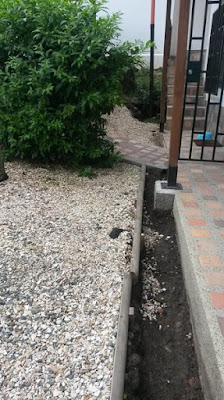 So, I have dug out a channel, as you can see here, and I am going to line it with plastic and then concrete, to construct another channel to get the water moving, I thought about a land drain, but that would not be sufficient to take away the quantity of water we get, so we will have our own stream.

I had just finished digging out, and moving the soil (surprisingly good soil full of earth worms) to the surrounding beds, when the heavens opened and I got a soaking, so called it a day. Went for a shower, changed, and blow me down the sun has come out, but tough, I'm not starting again today!
By Phil Sale at June 05, 2015