Time to bring you up to date!

I guess the most important point to make, is that moving was definitely the right decision for me, Marcela has made my life, in many ways, and for that she will always have my love.

In October, I decided we needed a carport, not so much for the rain, but to give the cars a bit of protection from the sun, it took some doing, and not without incident, because I was working around the cars, and there was a high wind, instead of calling for Marcela, I continued, and the wind caught one of the beams which fell on our newish car, putting the first dent on the rear, the air was blue, and Marcela was not that pleased either, but the job got done.

My last project of 2014 was to make a new mahogany workbench for the workshop, one large enough to undertake any project, and sturdy enough to take some hammering. 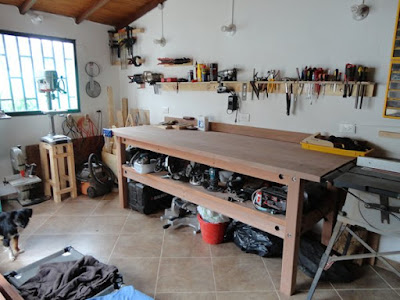 I am certainly pleased with the result, the only problem was that the timber was soaking, the yard said it was preservative, but I still think it had never been dried out, so I have had to do some tightening as it dried out, and some cracks have appeared, but nothing that affects the integrity of the bench.

In December I had to go to Bogota, and renew my Visa, this wasn't without incident, it was due to be renewed in the New Year, however Colombia, has brought in an online application, you scan and upload all your documents, and they assess whether they are correct, to save you a fruitless journey, then you have go to Bogota to have the visa inserted in your passport. What they do not tell you is that, if everything is correct, and they have asked for payment, they issue the Visa immediately, and not when your current one expires. We had panic stations, as I had booked flights for us both in January, but I only had ten days to attend or I lost my money and had to reapply, so I had to rebook the flight, last minute, between Christmas and New Year, not the cheapest time, so I went alone, I was in and out of the Office in five minutes, and then had to waste a day in Bogota, waiting for my return flight. Thankfully I can now stay until December 2017, when I have to apply again.

My first major project of the year was to rebuild the Gazebo, or as it is called here, the kiosko. The old one, was ready to collapse, my Father-in-law who had been with us over Christmas, helped me dismantle it in the New Year, and then due to rot in one of the uprights, everything came to a halt, until I could have some metalwork fabricated, so I was then on my own. Marcela helped me when she could, but otherwise, I improvised, and used ropes and supports to get the heavy timbers in place, eventually it was finished! 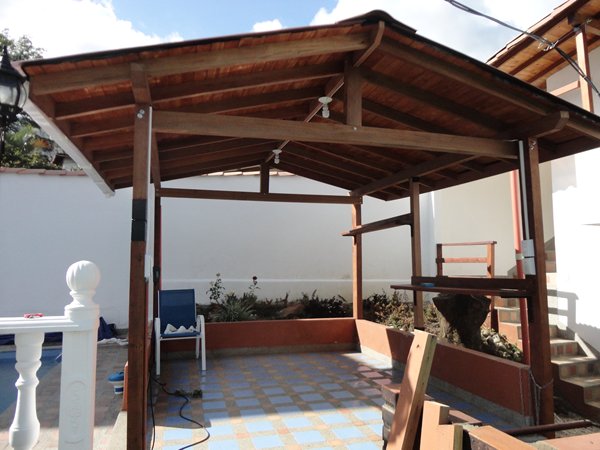 The only major difference, was the size of the overhang, all round, and the quality of the joinery! :)

The only part of the build that sent shivers up my spine was the roofing, I don't do heights, my family are reknowned for preferring to keep our feet on the ground, but it had to be done.

It was worth it in the end, and it has withstood it's first earthquake in the area, so I think it will last a year or two!


However spending time on this project, made me realise that my existing table saw was rubbish, I had been saving for a new one, and now was the time to buy it. 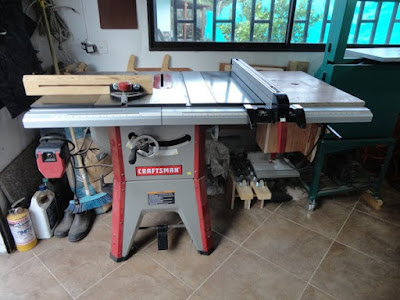 It isn't up to the one I had in Spain, but I didn't have the same budget, however it is a good saw, and I am pleased with the choice.

In between all the main projects I was kept busy with smaller ones, both  wooden jigs to help me in the workshop, and some pieces of furniture. 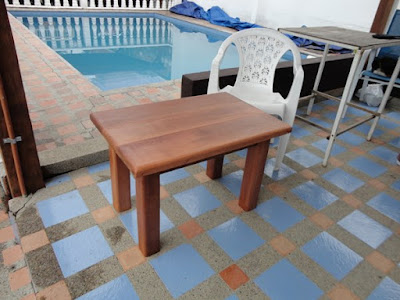 including this coffee table for the gazebo. made out of scraps left over from the build. 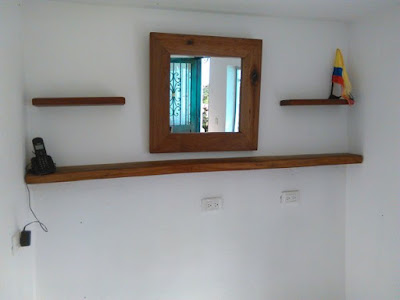 The mirror and shelving from reclaimed mahogany found dumped in the garden, after the ´previous owner had moved. 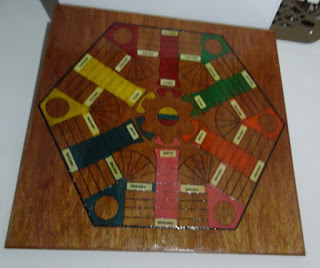 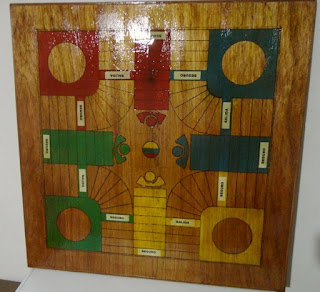 And this two sided board game 'Parqués' one side for six players the other for four, the nearest to this in the UK is Ludo!

My last major project, was not woodwork, well not exclusively, it was a build, I decided that the carport was suffering in the high winds we get here, and if left, another year or two, it would be coming down, so it was a carport upgrade, thanks to my mate, Peter in Spain (now back in the UK), who had done a lot of building work for me, whilst I acted as labourer, I learned a bit, and was comfortable undertaking this project, although I knew from the outset it would not be a quick job. Anyway, we now have a concrete block carport, with a new roof, as I stripped off the panels, and rebuilt it in the same way as the gazebo, so the panels have more support. 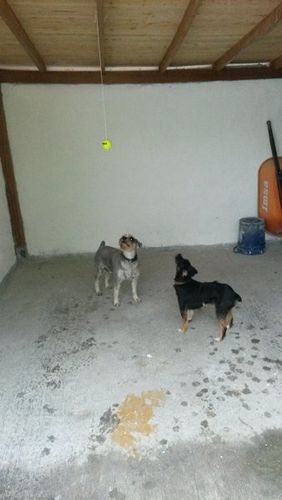 The boys are not sure what to make of  the safety feature which stops Marcela driving through the back wall... when the ball touches the windscreen it is time to stop!

Finally yesterday, I finished putting in all the electrics, so we now have power and light, using overhead conduit, to bring it from the workshop.

I thinks that more or less brings me up to date.