When we moved to the Finca, I bought a commercial Bandsaw, it was made locally, and although it has done it's job, it has always been a pain, however I adjust the settings, it will never cut in a straight line, I thought it was because there is no bottom blade guide, only a top one, so in the end last week, over a year later, I decided to query this, thinking it might have been a construction oversight.

The Company (Metalicas Jollis, Medellin)  came back to me, saying that none of their Bandsaws have bottom guides, but if I wanted one, I could take it back, and they would adapt one to fit...at a price, however they suggested I try a new blade first.

By coincidence, a friend of mine has a woodworking website, and he loaded a video on a jig he had made to sharpen his bandsaw using a mototool, similar to a Dremel. I had been toying with the idea of buying one, not a Dremel I hasten to add, but a cheapie version, so I went and got one.

It was then back to the scrap bin, and after joining some smaller pieces to make larger, I had my blade sharpening jig. 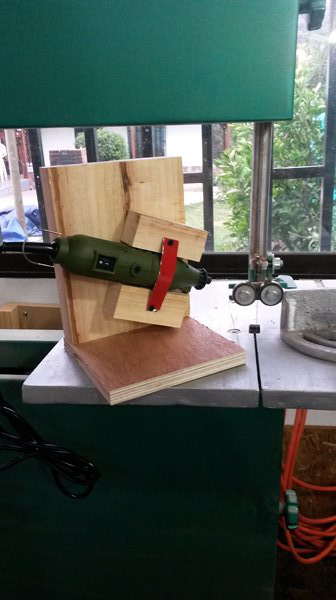 Will it work?  well it certainly worked for John, as you can see Here, so there is no reason why not, and hopefully this will solve or at least reduce the problem.
By Phil Sale at July 13, 2015