I finally got back to work this morning, I am having to be flexible for the next week, because Marcela needs help preparing for, and setting up for the Bello Fería, and her stand for Dezyners. However I did what had to be done, and then got stuck into some rendering. 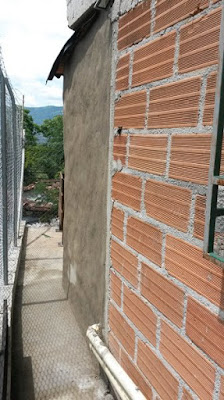 As you can see, I haven't much space between the back of the house and the perimeter fence, to work, with Tito wanting to help, it didn't take long before I had to shout at him, he eventually got the message and lay down nearby, keeping his beady eye on  me! This section of render is the back of the shed, two barrow loads of cement did the trick, now on to the house itself, I intend to split this into three sessions.

As I have said previously, I can only access the downstairs section of wall, due to the limited space, I may try getting someone else in to do the upper floor at a later stage. The final session encompasses one of the guest bedrooms, which needs a new window fitting, I priced it up yesterday, it's only £30 for the window, just a plain aluminium frame with sliding panes, but I need to have a reja (security bars) made, which will be the hold up, so I will try to arrange that next week, the shop bought ones are decorative only, doing nothing for security!!
By Phil Sale at July 11, 2015