Although there have been no posts for a week, that doesn't mean I have been putting my feet up! I have been doing maintenance work on the house, but nothing that was worth a post. Painting, gardening etc. all the mundane things we all have to do.

Also winter is now here, which is going to curtail my outside activities due to the heavy rain, I will have to time my work to avoid the storms if possible.

This morning it was rendering again, I got started at 7.15am, after Marcela had taken off for the day, to gad around Colombia Moda, the South American version of Paris Fashion week... all right for some! 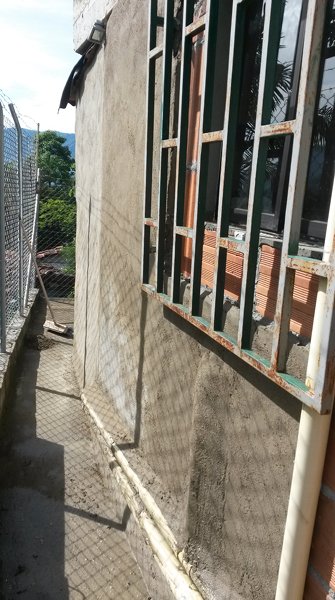 I am not rushing, I still have not bought the window for the downstairs bedroom, so I am going to come to a stop shortly, anyway, The next section will be awkward as I have got to render behind these bars, and also between drain pipes. I just wish I could get access to render the upper floor as well, it looks so much better., but maybe not for long!

We are having problems with the Recreational Fincas behind us, there are two reasonably close, no one lives in them, except a Mayor Domo, who has his own cottage in each of the grounds, and they are rented out as and when, they have sound systems that would make a commercial Disco proud, and the owners will do nothing to control the volume. We have asked them to play ball, but they are only interested in money, we can have non stop high volume music for between 24 and 48hrs, sometimes longer, non stop, our walls are vibrating.

We had a meeting with the Alcaldía/Town Hall, last week, it turns out that there are no regulations covering these places, they are not regarded as businesses, or homes, the owner rents out at will, and it appears pay no tax.. a lucrative 'business' if you have the money to buy such a place.

Therefore, as my finger up to them, I may well paint the back of the house in  psychedelic colours and grafitti, so that the thoughtless, disrespectful A+++holes who stay there, have to look at that all day, we wont, we only see the back of the house when we go there for a reason.
By Phil Sale at July 29, 2015