Work came to an abrupt halt last week, all because of a minor water leak,whilst rendering, I disturbed the pipe I had installed by the Builders(obviously not very well!) when we moved in, it is the hot water pipe to the upstairs shower, and because of the ambient temperature here, it can safely run up the outside of the house.

This leak, which was really a weep, was enough to threaten my rendering, so I stopped. I went off to Homecenter, first I looked for sealer that you could use under or in water, but they had never heard of it, which was not a surprise in Colombia. So  I needed CPVC fittings for a hot water system, but they only had a limited selection of fittings, and not the ones I wanted, in desperation I bought what they had, in the hope it would do, the straight coupling, accepted the pipe at one end for 1cm, which was correct, the other only for 3mm, therefore it was with much trepidation, that I cut the old joint out and fitted the new, using plenty of CPVC glue, but it started weeping from the weak joint, there was no option but to go across the City and get the correct part, but I wasn't going until yesterday, so work came to a halt. 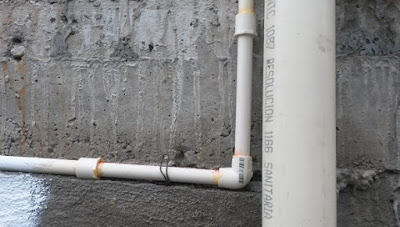 Having got the parts, which consisted of two 45° fittings, in order that the water was not bashing against a 90°, I again cut out the joint and with some new pipe, the problem was solved... no leaks 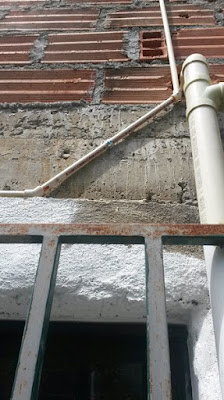