This morning, we had no appointments, the rain had stopped for the day, the sun was out, no excuses it was time!! 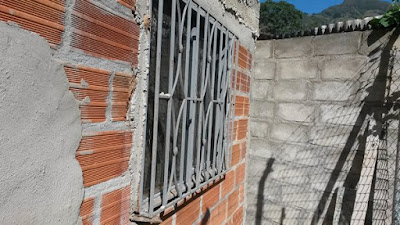 But who would have dreamt that removing a window could be so difficult. There is a big concrete viga/lintel, so the house collapsing was not a concern, however I attacked the concrete holding the window in place and it didn't want to budge, I tried with the angle grinder, that helped, but cold chisel and lump hammer were the only way this was coming out. I was looking for the supports that tied the frame into the wall, there weren't any, the concrete bedded into the side of the frame, and into the ladrillos / bricks, I had to be careful I didn't end up with a space big enough for French Windows! 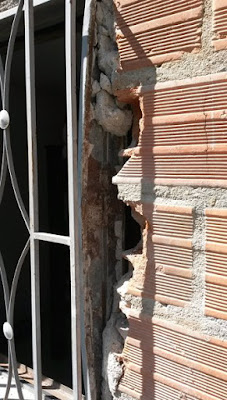 As it was the hole got bigger and bigger, there was no option, other than using my big grinder with a cutting wheel from the inside, and since the beds etc. are in there that wasn't an option.

Eventually it came out, 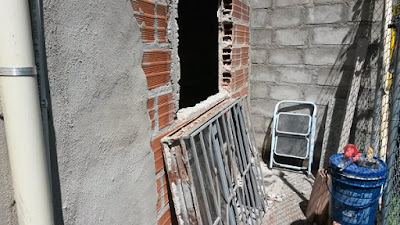 then I had to cut some wooden shuttering, so I could build the wall up again, the space including the shuttering was just over 120cm wide, and I needed 100cm high but had 104cm, that was no problem 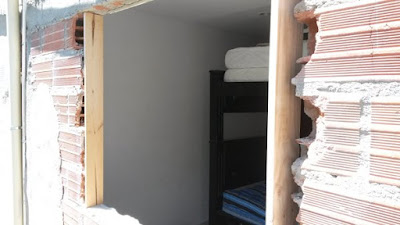 This was no easy job, I filled the gaping holes with as much rubble as possible, then mixed up some cement and started work, it was one of those jobs where you end up ditching the tools and playing mud pies, it was far easier.

I have no photo of that stage, I was too mucky, anyway once that was done I cleaned up, and put the old window on the roadside, sure enough within 20 minutes the bell went, and a local asked if he could have the window, and loaded it on his wagon, asking is unusual here, usually they just take it!! I then cut the lawn, before lunch, I needed to give the cement time to go off before trying to fit the window.

Lunch out of the way, it was on to the next stage, and although none of my windows have external sills, I bought an aluminium one to fit on this window, I love making work for myself!

It ended up being a case of third time lucky, before I got the window the right way up, and the right way around, levelling it and wedging it on each occasion until it was spot on level in every direction.

Then Marcela helped me, by supporting the frame whilst I fitted the sliding panel, to ensure it shut without leaving a gap. This is the one thing that really annoys me about this house, none of the windows have been fitted square, and there are gaps of varying sizes between the frame and the sliding panels. I may replace them all in time, if I can do it from the inside so I do not have to remove the rejas. 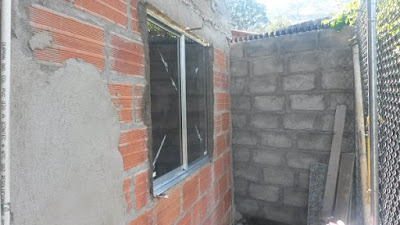 To keep the window in place, I have used expanding foam top and bottom, and construction adhesive down the sides.

Now I have got to wait until the cement is totally dry, then install the reja