One job I have been meaning to do for a while related to my workshop, when it was built, rather than have windows put in the roadside wall, which was a security risk, especially as it is out of sight of the house, I had open slits built in, these allowed a constant flow of fresh air, which as the temperature does not vary that much was a good idea.

To stop any children getting through the slits, I had security grilles made and I fitted those: 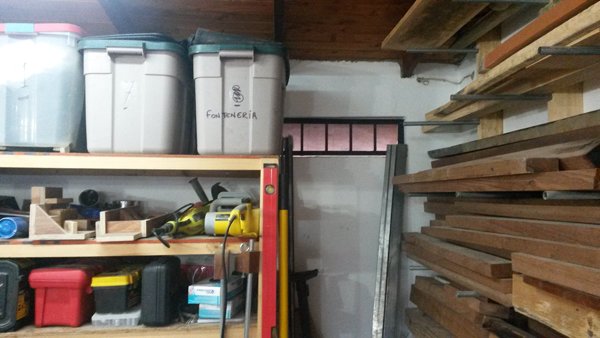 There are two, one either end of the wall above head height, you can just make out one at the top right of the above photo.

The problem came when I fitted the alarm system about 18 months ago, because any large vehicle that passed, was picked up by the alarm sensor, and activated the system. As a temporary measure, I propped boards up on the inside, but from time to time they would drop out with vibration from these heavy vehicles and off would go the alarm.

Besides, blocking the slits defeated the object of them, as I said, it has only taken my 18 months, but today, I made hoods for the slits, out of plywood. 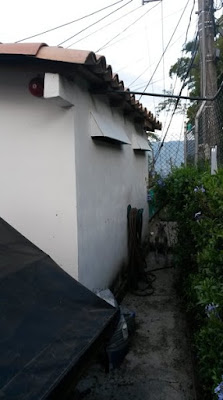 This has blocked the outside traffic movement from the alarm sensor, but now allows a constant flow of air yet again, into the workshop, which stops it getting too hot. Another job struck off the list!