Finishing up the Bling Displays!

I wanted to get these out of the way, over the last two days I had stained and varnished the case, and fitted a piano hinge, and hook an eyes to close the case, it was then ready for the lining, which I thought Marcela was going to do. HaHa joke!!

We went into the City the other day, and bought the material,  I started in the workshop last night, cutting out the panels, and spray gluing them in place, Marcela would appear, saying she would cut the panels, then disappear before I could open my mouth!

Anyway I continued fitting the panels first thing this morning, fitted the handle to the case, and the retaining chains, for when the lid is in the upright position. 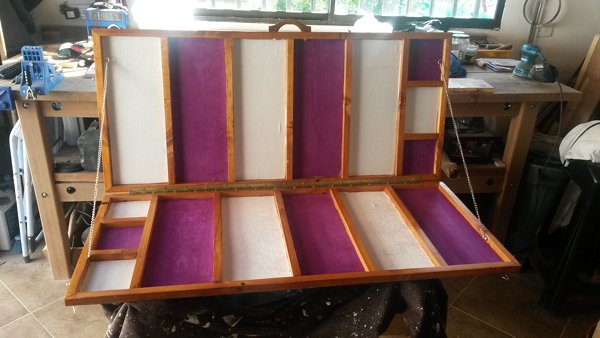 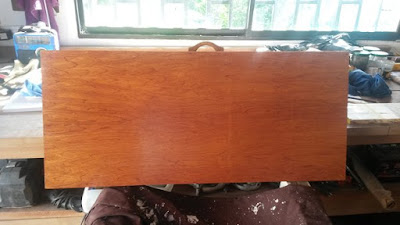 Now Marcela only has to stick the micro hooks in place at the top of each panel, to hold necklace chains, then it is finished... No really, she will do that!

Then it was on to project number two, a 'T' bracelet display, I had come to the conclusion that the quickest and cheapest way to do this was using plumbing fittings. So the only woodwork involved was making a base out of some scrap mahogany. 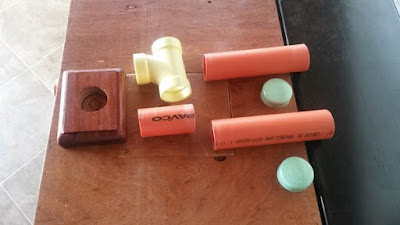 We had bought some industrial ribbon to cover the entire build, but it was a pain in the backside, when I was practising  on the dryfit: 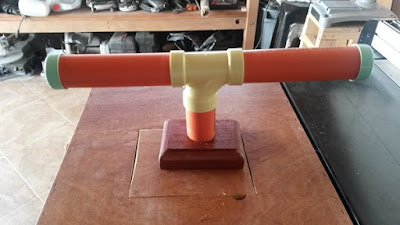 In the end I decided the only way it was going to look reasonable, was to spray paint the central joint and the stop ends, and cover the tubes with the purple left over material, again using spray glue. I just hope Marcela had no plans for the leftovers, otherwise I am in trouble.

Update: Marcela doesn't like her bracelet holder, because it looks like drain pipe. that is her prerogative, but surprise surprise, it is drain pipe!  You want budget builds, you have to accept compromises. Someone has got to go back to the drawing board!