Going from Bad to Worse!

Today was the turn of the footboard, I started by pocket-holing all the boards, and then sanded down the panel, after which it was time for the trim, which was when I discovered that the timber has started to warp, I only cut it a few days ago.

Having worked around the problem, and fitted the trim, it was time for the legs, and this was when I found that the plans are yet again wrong, and if I had continued to follow them, we would have ended up sliding down and out of the bed.

I had fitted half the leg to either end of the panel, so I had two choices, work with what I have got, or take the parts off and start again, the problem with the latter is that it would have left the screw holes, and weakened the joint when I attached the new part, so I am going with the former. 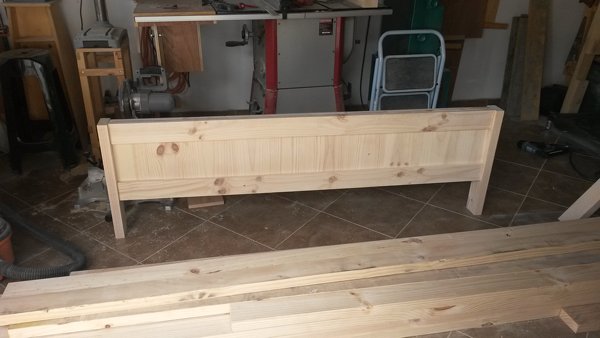 I will put a longer 2x4 on the outside, and shape the bottom of the existing one.

This experience has pushed me to do something I have wanted to do for years, and that is to master sketchup, so I can design my own plans, and not rely on others. So once this project is completed, there will be no big woodwork projects for a while.

Tomorrow will be a late start, as due to the heat, I am taking the dogs for a haircut. It will probably be the week-end before I get stuck in again, as I am off for medical appointments on Friday!
Posted by Phil Sale at 16:19