This morning, I got stuck in to the Bed Project, the first parts to be made are the head and foot boards, therefore I spent the first part of the morning cuttings planks to size, and it did not take long for both the workshop and myself to get covered in sawdust. 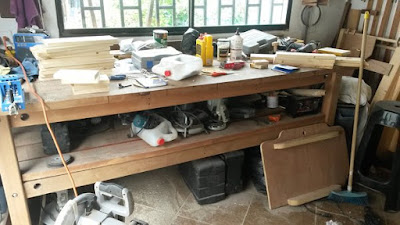 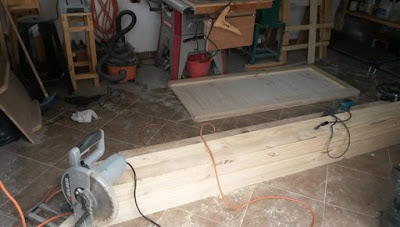 But the woodpile soon started to get smaller!

between my table saw, my mitre saw, and the sander, I had a whale of a time. I have been told off for not wearing my dust mask, but to be honest I rarely do, and the amount of time I spend in dust, I am not that bothered, if I were working in it day in, day out, it would be another matter.


Having cut the parts, I started to assemble the headboard, centre panel. This consists of ten, 1" x 8" planks, which are in real terms 3/4" x 7 1/2",  the outer two I had to cut down, so that I had an overall width of 71 1/2".  The plans called for these to be glued together, and then the main support would be the trim which is 3 3/4" wide on both sides of the panel. Although I am sure this would be fine, I wanted to be sure I had no problems in the future, so I pocket holed and glued all the planks to each other, which took quite a bit more time. 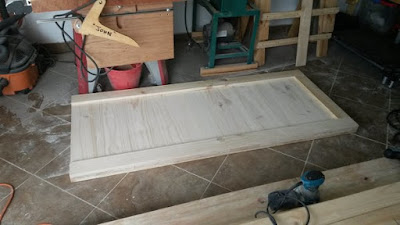 The trim, on the front, I glued and used brad nails, to fix in place, the nail holes I later filled with pine coloured wood filler. The back trim is fixed in place with glue and 2" screws which were drilled and countersunk, the screws going through into the front trim.

All the parts were sanded as I went along, and again when the panel was finished. 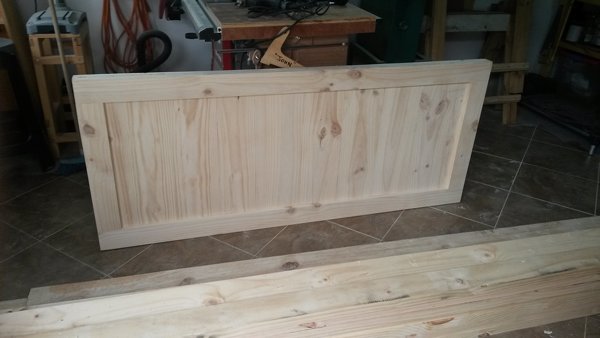 However finished is a big word, and in this case, only applies to the central panel, it still has to have the top trim made and fitted, and the legs. At least I am under-way, and don't I know it, having spent a large part of the time on my knees bent over the project, my back is killing.

Hopefully I will get more done tomorrow, but it will be a short day, as I have to go to Medellin and collect my car at some point.
By Phil Sale at October 26, 2015