Once I was able to prise SWMBO out of bed this morning, I started by dismantling the current bed, which we moved downstairs.

Marcela gave the room a clean, and then we started. firstly between us we took most of the parts up to the bedroom, which was no mean feat, the headboard and base struts were heavy in their own right. 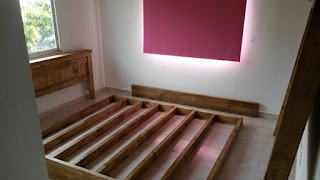 The first job was to screw the side panels to the base, I drilled and countersunk all the holes before adding the screws, to ensure nothing split. 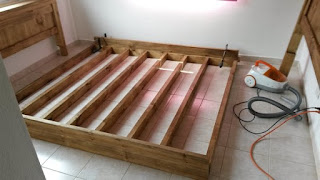 That done, Marcela and I then lifted the base into the slots on the headboard, this was the one part, that had been worrying me, but as it turned out, I need not have, it fitted like a glove. This goes to prove that the old adage, measure twice, cut once, still holds true, but to be honest I measured many more times than twice!! 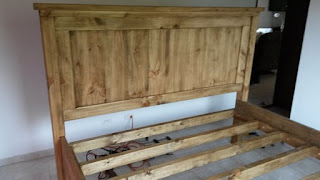 The base was supported on the fifth leg at this stage.

Time then to fit the footboard, here there was a minor problem, but nothing a chisel couldn't sort out, the base was 1/8" too wide at one point, due to a slight twist, but two minutes later it was in place. 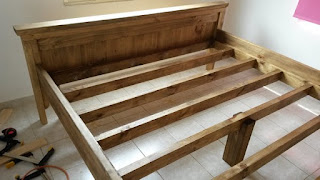 I then used a forstner bit to recess holes before drilling and using 3/8" lag bolts,  the side panels are also attached to the footboard using pocket holes, this is to keep them in place, rather than giving any strength. as the base was fully supported, the fifth leg then went into it's permanent position.

For ease of access, I then drilled the headboard, and did the electrics for the lights, because they don't sell lights here with a built in switch, I put the double switch, for both lights in the middle of the headboard, so we could both reach them if one of us falls asleep. Time then to fit the MDF panel to support the mattress, I varnished this yesterday, just because... there are half a dozen screws holding this in place.


Then it was just a case of cleaning up, and putting the mattress in place. 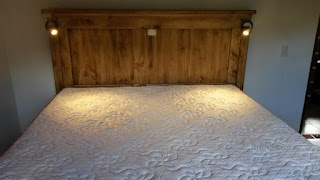 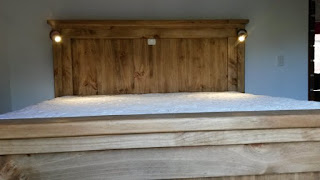 Only one worry now, because SWMBO insisted on the height of the bed being high enough for one of our dogs to continue sleeping under it, I may need steps to get into bed, my feet don't touch the floor when I am sat on it!!