This morning, I attached all the drawer bottoms, using glue and brad nails, if they had been going to take any weight, I would have cut a slot in the sides to take the plywood base, but as it is, this method will be fine.

I then sanded the units, again with 80 grit, onto 120 and finally 320 grit, they are now silky smooth. That done it was time to find out if my wooden drawer runners work.

I used a piece of scrap timber as a template, to mark on each drawer where I wanted the bottom of the runner, once I had marked both units, I then installed the runners, which were drilled and countersunk for screws, I also glued the runners.

Once the drawer runners were installed, I had to install the unit runners, they had to correspond with the drawers, there was plenty of wiggle room, so using my framing square, I used the body to mark the place for the bottom runner, and  the tongue ran alongside the unit to ensure the runner was square. I then glued and screwed them in place. That done, I used a spare runner as a spacer, and fitted the top runner. As you can see in the photo above, it is a simple system, which was the method used in the olden days, you have to wonder why they changed, when you see the price of modern runners!

Once all the drawers had had their runners fitted I tried them out to ensure there were no problems, and they slotted in nicely. 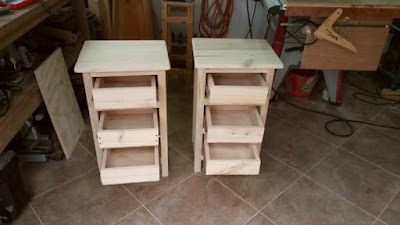 As you can see in the photo, I had to use screws on one drawer in the end, as it was refusing to stay square.

I will fit a stop on each drawer, before fitting the back, so they will not pull straight out, but I will make it so it can be moved if a drawer needs  removing for any reason.

Now I need to cut the drawer face plates, to fit on the front of each drawer, and fill the space. These will have the handles fitted before attaching them to the drawer.

I still have to varnish the units, then fit the tops and backs, then they will be complete, hopefully sometime this week.
By Phil Sale at November 24, 2015