That makes a change, no time for a siesta today, despite the heat.  I had always vowed that whatever security I installed it would not include Razor Wire, it would be like living in a prison, however with the changes going on up here on the mountain, I have changed my mind.

There is a great surge in new construction, and all by businessmen who have bought up the land, and are stripping it bare, and building holiday homes for let, and week-end rental, also we heard a rumour the other day, that the person who is going to buy our neighbours house, plans to build a two storey house at the back, which will block out our view, and a one storey business in front, which is believed to be a Restaurant, with all the music, late hours and undesirables that entails, especially as there is no space for parking.

All this will mean, new faces, and not permanent ones, many who take the opportunity to case the area for return visits of a dubious nature.

I have already taken the first step, and that was to buy house and contents insurance, until now I had taken the risk, but with all the building work, and the mountain, contrary to initial advise is not stable, so I have insurance for landslide and earthquake, in addition to the usual. Landslide because all trees are being rooted out, and it was the roots of these trees, stopping the mountain from moving.

Yesterday, I took the second step, and bought two rolls of razor wire, at $17 / £11-50 a roll for 10m.
This morning I got started on the front, where I have installed the razor wire fairly close together, it went slowly, but smoothly, and just over three hours I had it done. 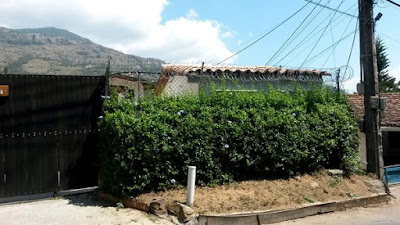 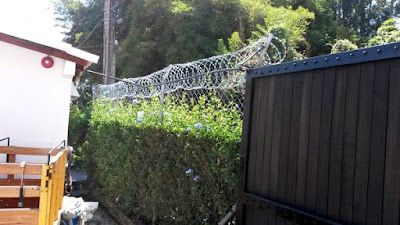 It certainly doesn't look pretty, but from the road side, it doesn't stand out too much.

I then got started on the back, this did not go as smoothly, because whoever or whichever machine, had rolled the wire and put it in the box, had crossed the wires, and I just could not untangle it, so I had to cut two sections out, which just left me enough to get the job done, in another three hours. However this was not without incident, and it bit me a few times, drawing blood, but fortunately nothing serious. 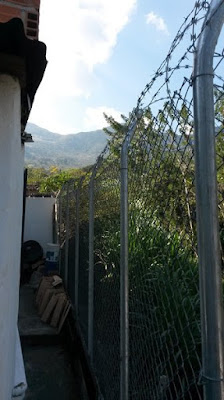 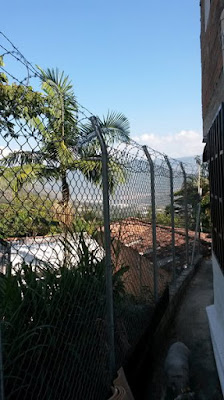 My neighbour didn't look too happy, when I attached the wire to my side of the dividing wall (my wall),, it's only about 1m, and had to be done, if the job was worth doing at all.

Now I am going to look at installing a professional security camera system.
Posted by Phil Sale at 17:01