Mirror Mirror on the Wall!

Yesterday, I went over to my Mother-in-Law's and finished fixing the trim to the new doorway, that's another job off the list, but it added another, because on her landing hangs a mirror!

Last year I made a mirror for my Mother-in-Law, using reclaimed mahogany found lying in the garden, but over the year, it has twisted, and split, pulling the corner joints apart, so it was time to do something about it.

I went and fetched the mirror this morning, as I had no room in the car to bring it yesterday. I removed the plywood backing and measured the mirror, it is 33 5/8" x 17 3/4", why such an odd measurement? because I had the mirror cut to fit the frame, which being reclaimed timber, I had little control over the size.

Having got my measurements, it was time to prepare the new frame, which will be 2 x 4 pine,  then stained.

Time to use my dado blade again, I hope it is some time before I need to buy another, I am enjoying using my new tool. 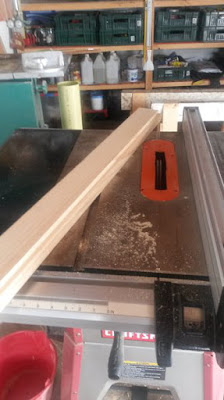 I then cut the two lengths to their final size, making four pieces, and mitred them using my sliding mitre saw.

That done, before I started sanding, I drilled the pocket holes to fasten the corners, after which they were all sanded.

The frame was then assembled, using glue and pocket holes, but without the pocket hole screws, because I haven't got any at 2 1/2", so I used washer top screws, not as tidy as using the real thing, but it did the job. 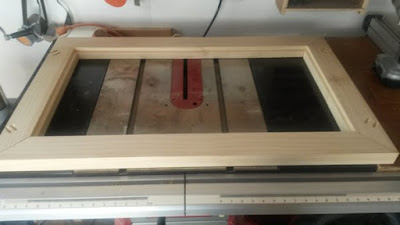 That done, I filled the pocket holes with a mixture of pine fine sawdust and glue, and left it to dry, they are on the back of the mirror frame, so wont be seen, however they will be sanded and stained, and hopefully look OK when it is done.

I haven't yet tried fitting the mirror into the frame, it will be a tight fit, so fingers crossed, I might get to it tomorrow, if not it will be Thursday.