As I said, I had to go over to my Mother-in-law's house this morning to fit a new doorway, to a bedroom that had never before had one, I thought it would be simple enough, so I left here early, having loaded up my tools yesterday, and arrived at 8am.

The door and frame, I had bought before Christmas, but due to the problems with my knee, the work had to go on the back burner, until now!

Houses here, like in many Mediterranean Countries, have the floor tile brought 10cm up the wall, to make it easier for mopping, I therefore had two options, in order to fit the frame, cut a tile and inset the frame, or cut the frame to sit over the tile, the latter was by far the easier option, so I went for that.

Using my circular saw, set to the thickness of the tile I cut the rebate for the tile, on the hinge side, so the frame would be flush with the wall on that side.

Having done that, I started lining up the door and frame to the wall, it was looking easy, the only problem I could forsee, was that I had had the door and frame prepared at the  DIY Store, and the lad had wrecked the heads of a few of the hinge screws, so removing the door was not an option, I therefore wedged it to the correct height in the open position, whilst working on the frame. 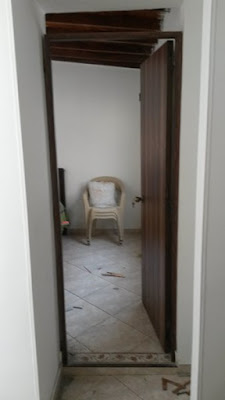 I knew, I should have forgotten easy!, because for once the walls here were 'rock' solid! I drilled through the frame with a 5/16" wood bit, changed over to a masonry bit, but all it did was the first inch, then nothing, I thought I had hit a metal viga, in desperation, I changed over to a metal bit, and it pounded through the wall, but it was only concrete. I then used frame fasteners to secure it to the wall.

The hinge side done, I then had the opening side to do, this was a little more complicated, because there was a 3/8" gap between frame and wall, fortunately I had taken some thicker shims with me, I packed out the space, drilled through the wood and shims, then changed to my second metal bit, and ploughed through the wall. By the time I had finished, I had ruined three bits, which I will have to replace.


Now I just have to make a panel to fit above the door to fill in the space, and add trim to the top and both sides. I hope to have that done next week.
By Phil Sale at January 14, 2016