The router table is taking far longer than anticipated, due to appointments I am having to keep, on the other side of Medellin for Physiotherapy on my knee, although the appointment itself, is only an hour a day, with travelling it is between three and four depending on traffic, which cuts into my work time. On top of that I have been having work done on the car.

Sometimes I wish I had taken up car maintenance as a hobby instead of carpentry, it would have cut my costs considerably. The other day the electric windows packed up on my Montero, whilst we were out, so on the way home we stopped off to have them looked at, it took three hours for them to repair, and today, I decided it was time to have my handbrake fixed, as it wasn't working...at all! and living on a mountain that is not good, on checking it, they found I had a rear brake cylinder leaking and the other seized, so I had both replaced, and the handbrake done, (although I think it will still need adjusting, it now works!) that was another three hours. However today was not totally wasted, as I trawled the side streets of Bello, and found a yard that sells, oak, teak and cedar, dry for furniture making, OK it's not cheap, but for specials!

Anyway back to the router table, yesterday and today I have been working on the router lift, this will allow me to adjust the cutting height, by winding a threaded rod from below. 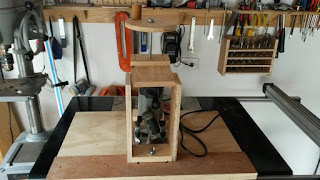 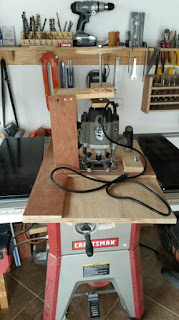 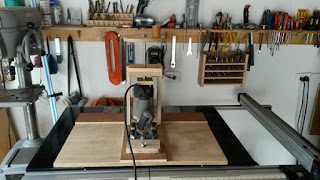 These give you a view from three sides, from the top, back:side:front, as you will have noticed it is upside down, I need to get some bolts and wing nuts, to attach it to the bench. Then the router table itself is finished, I will then make a fence, to fit on top, I may be able to adapt the old one, I'll have to wait and see.
By Phil Sale at February 25, 2016